Rafi Isawi has returned to Iraq to face trial for accusations related to terrorism; other Sunni figures with similar cases have expressed readiness to return to Iraq. 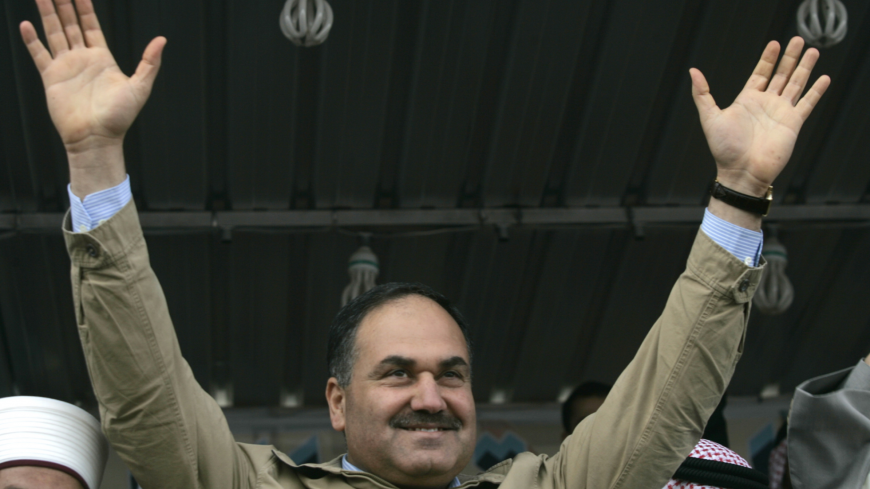 Iraqi Finance Minister Rafi al-Issawi attends an anti-government demonstration in Ramadi, 100 km (62 miles) west of Baghdad, March 1, 2013. Issawi resigned that day in front of crowds of Sunni Muslim protesters who have rallied daily against the Shiite-led government for more than two months, demanding an end to marginalization of their minority sect. - REUTERS/Ali al-Mashhadani

Former Finance Minister Rafi al-Issawi, a prominent Sunni figure, has returned to Iraq and turned himself in for trial on terrorism charges.

On June 21, parliament Speaker Mohammed al-Halbusi said Issawi has no ties to terrorism and that such allegations are “malicious,” saying Issawi’s return is a part of “yearslong UN efforts involving Iraq’s political and social reconciliation dossier. President Barham Salih has been engaged in Issawi’s return.”

This brought a quick reaction from Shiite politicians. Fatah Alliance leader Hadi al-Ameri warned that he will take a clear and strong position on the matter of allowing Issawi to return and receive a new trial, and found it odd that Salih and other officials had such knowledge of Issawi’s return.

The State of Law Coalition led by former Prime Minister Nouri al-Maliki threatened June 19 to take “up arms if the Saddam Hussein's Baath [Sunni-led party] was brought back to political life, as well as the terrorists and killers, [namely] the other side of the Baath.”

However, before coming out with such a strongly worded stance, Maliki had tweeted, “In Rafi al-Issawi’s case, we will respect the decision of a professional and impartial judicial system, in its judicial context.”

Three days before Maliki's tweet, the Supreme Judicial Council said an Iraqi Counter Terrorism Service judge had arrested Issawi after he “turned himself in to the judiciary on charges of terrorism,” and that he is expected to be retried on charges of corruption and squandering public funds for which he was sentenced to seven years in prison in absentia in June 2017.

Issawi's arrival in Iraq ignited a wide controversy in political and media circles, with some denouncing his return and others welcoming it.

A senior source at the Iraqi Forces Alliance, the largest Sunni parliamentary bloc, told Al-Monitor, “President Barham Salih and Faleh Fayadh, chairman of the paramilitary Popular Mobilization Units, sought to bring Issawi back to his standing [as a Sunni leader].” The source added, “The talk is focused now on other Sunni leaders, such as former Vice President Tariq al-Hashemi and Sheikh Ali Hatem al-Suleiman, who will be able to come back in case a settlement is reached in Issawi’s dossier, considering that the dossier mainly revolves around him and that he was behind the 2013 demonstrations.”

After Issawi came back, Hashemi — who was convicted on charges of terrorism — said he is willing to return to Iraq and turn himself in.

Speaking to Al-Monitor from Istanbul, where he resides, former Ninevah Gov. Atheel al-Nujaifi — who was convicted of corruption and of negligence in performing his duties in the fall of Mosul to the Islamic State in 2014 — said he would “return to Iraq once the files involving him are resolved.”

The source at Iraqi Forces Alliance said, “Nujaifi opened a direct channel with Prime Minister Mustafa al-Kadhimi so as to have his judicial file settled and have a political return to Mosul," and added that the Turks and Qataris are pushing for Nujaifi's return.

Ihsan al-Shammari, who served as an adviser to the office of Haider al-Abadi when Abadi was prime minister, said, “The return of Issawi and other leaders is … an attempt to rekindle a new Sunni project” in Iraq so Sunnis can be better organized politically.

He said, “This issue could be related to a vision put forward by Iran, namely an attempt to revive Iraq’s internal political affairs based on Sunni, Shiite and Kurdish grounds.”

Iran perceives the Iraqi Islamic Party, which Issawi and Hashemi are the most prominent leaders of, as being closer to Tehran than the rest of the Sunni parties. Based on that, Iran may be supporting the exiled Sunnis' return so as to obtain greater influence within the Sunni political community.

According to legal expert Tariq Harb, the Criminal Procedure Code 23 of 1971 grants those convicted to more than five years in prison in absentia the legal privilege to be retried when turning themselves in or after they are arrested.

Issawi worked with Maliki for nearly seven years. He served as deputy prime minister in the 2006-2010 government, and as finance minister from 2010-2013, when he resigned. Issawi had been at odds with Maliki since at least 2010. Sunni protests against Maliki's Shiite-led government began in Anbar province in December 2012 after Maliki had Issawi's bodyguards arrested.

The raid, the resignation and Maliki's issuance of an arrest warrant against Issawi prompted the Issa tribe he is a part of to also take to the streets in Anbar and take up arms in an attempt to defend him. These rotests and conflict were seen as a prelude to the Islamic State (IS) takeover of Mosul in 2014.

Harb said that he expects the ruling against Issawi to be voided and that he will be released, "in case he provides new evidence, documents and testimonies denying the charges brought against him, especially the financial and administrative corruption charges. Yet it is up to the court to decide and its ruling could be appealed.”

That is not the first time that figures accused or convicted of charges of terrorism have returned. Mishaan al-Jaburi, a Sunni politician who owned Al-Zawraa Channel and who encouraged the taking up of arms against the Shiite-led government, returned in 2013. Three years later, Mohammed al-Daini, who was accused in the 2007 Iraqi parliament bombing, also came back to Iraq. Moreover, cases involving Sunni leader Khamis al-Khanjar, who was accused of financing IS, were settled. All of the above-mentioned figures returned to Iraq and were acquitted as well.