Iraqi controversy over the return of Sunni figures accused of terrorism

The reports on returning exiled Sunni figures who were sentenced by Iraqi courts to Iraq stirred controversies among Iraqis. 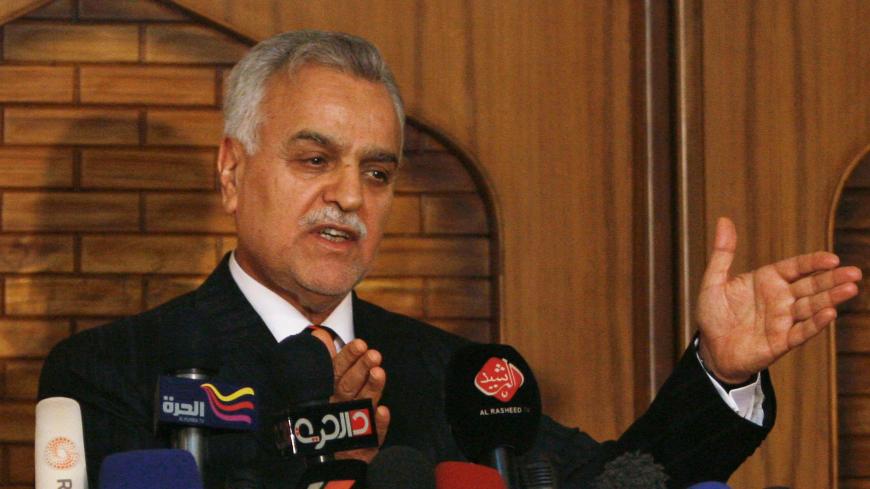 BAGHDAD — Iraqi media reported in recent days that the Iraqi judiciary has completed the procedures for the return of former Vice President Tariq al-Hashemi, former Ninevah Gov. Mosul Atheel al-Nujaifi, former Finance Minister Rafi al-Issawi and Sheikh Ali Suleiman. The reports said that legal cases against these Sunni figures have been dismissed as part of a political deal within the scope of the political reconciliation.

Hashemi is accused of terrorism dating to 2011 while Suleiman faces terrorism charges dating to 2013 related to bringing the Islamic State (IS) in to Iraq; Issawi and Nujaifi face separate charges of corruption dating to 2013.

Despite the denial by the judiciary, Nujaifi told Al-Monitor, “There are quick and ongoing legal steps that are being taken before the Iraqi courts to drop charges against me and against former Minister of Finance Rafi al-Issawi. I do not know anything about the legal cases against Hashemi and Suleiman.”

Nujaifi added, “This is just a legal and judicial procedure and does not fall within the framework of political deals, as was recently reported. However, President Barham Salih and Prime Minister Adel Abdul Mahdi are the ones who paved the way for these procedures. They are convinced that our return is much needed at this time to fill the political vacuum in Mosul [capital of Ninevah] and Anbar.”

Nujaifi continued, “Some of the Sunni parties who fear our return are trying to put spokes in the wheels. Meanwhile, the Shiite parties that opposed us have realized the need to put things back in order and work with Sunni leaders who enjoy true popularity rather than with contingent leaders. Out of 15 cases against me, six cases had been settled and the rest are being settled under the amnesty law.”

The return of Nujaifi and Issawi seems possible because of the nature of the charges against them. Their cases can be covered by the general amnesty law. However, Hashemi and Suleiman are accused of terrorism-related charges, which are not covered by this law. They both have yet to make any comment on the news about their return to the Iraqi political scene.

Al-Monitor learned from a well-informed judicial source who said on condition of anonymity that the announcement of the return of legally wanted Sunni figures was made at this particular time to prepare for a political reconciliation being orchestrated by the Iraqi president and prime minister. The reconciliation primarily aims to restore stability in Sunni regions.

The source added, “Hashemi and Suleiman were mentioned at first but at a later stage their return was denied. This is to suggest that there is no political deal taking place away from the judiciary, as had occurred with a group of Sunni politicians, including Mohammed Daini and Mishan Jubouri.”

The news about the return of Sunni figures accused of terrorism and corruption was heavily criticized in Iraq, most notably by an influential Shiite bloc that particularly opposed the return of Hashemi, the former leader of the Iraqi Islamic Party.

The spokesman for Asaib Ahl al-Haq Naim Aboudi said on Twitter, “Hashemi’s return is impossible. The enemy exploits any fabricated news in order to distract us from our basic issues.”

Leaders in the Al-Binaa Alliance, which is composed of the Fatah Coalition and the State of Law Coalition, opposed any deal occurring behind the back of the judiciary in relation to cases of terrorism and corruption.

Sunni blocs are also divided on the issue. The former member of parliament for the province of Ninevah, Abdul Rahman Alloizi, told Al-Monitor that the situation is very complicated. “In order for the defendants to be covered by the amnesty law, all plaintiffs, and they are many, must waive their personal right, especially in terrorism cases.”

Alloizi said Osama al-Nujaifi, the leader of the Mutahidoun bloc and the brother of Atheel al-Nujaifi, looks forward to the return of his brother and Issawi to the political scene as they are leaders of his bloc; the rest of the Sunni blocs reject their return.

In a tweet March 2, the leader of the Sunni bloc al-Hall (the Solution), Mohammed al-Karbouli, who appeared enraged by the news of the return of the four figures, said any such return must include all Iraqis against whom politically motivated judicial decisions are issued, in particular members of the Sadrist movement.

But Ahmed al-Jabouri, a leader in the parliamentary National Axis Alliance, said in tweet, “Rafi al-Issawi, who was ousted from the political scene in ambiguous and unconvincing circumstances and against whom multiple sentences were issued in absentia, can today return and by his mere appearance before the judiciary all previous judgments against him would be dismissed. The judiciary takes its final decision in his regard and the same goes for Tariq al-Hashemi. The matter is judicial in the end.”

The news of the return of the four Sunni figures accused of terrorism and corruption, even if we assume that it is not part of a political deal or a political reconciliation, is a trial balloon launched by the political blocs to which they are affiliated. It aims to gauge reactions both in the street and in political quarters.

In both cases, the Iraqi judiciary will again be the subject of controversy. Any amnesty or acquittal of any accused person could remain tainted by suspicions of being part of a political deal.