Iran hunkers down in Syria after Caesar Act sanctions

Iran's Islamic Revolutionary Guard Corps says it has no backup plan and is not leaving Syria. 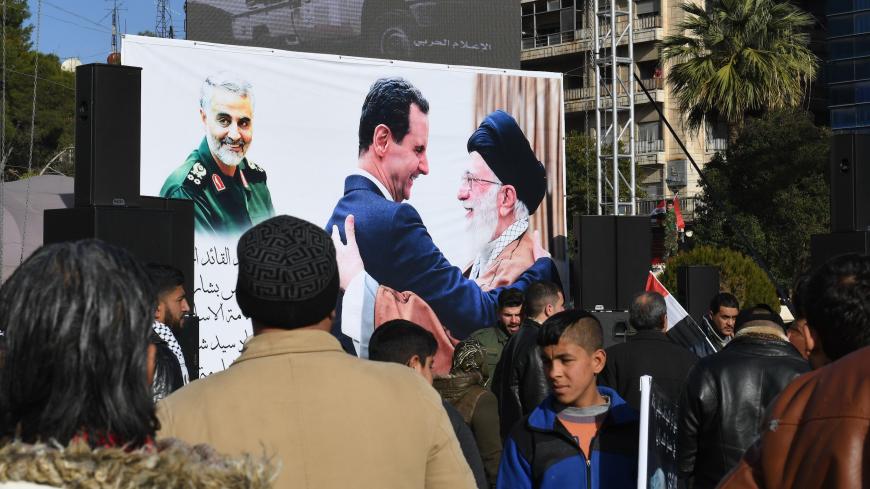 Syrian demonstrators look at a poster bearing the portraits of Iran's Supreme Leader Ayatollah Ali Khamenei (C-R) and Syrian President Bashar al-Assad (C) in the central Saadallah al-Jabiri Square in the northern Syrian city of Aleppo on Jan. 7, 2020, to mourn and condemn the death of Iranian military commander Qasem Soleimani (portrait-L), and nine others in a US air strike in Baghdad. - AFP via Getty Images

The United States, Israel and Iran all seem set to continue their roles in the fight in Syria. The Islamic Revolutionary Guards Corps’ Quds Force, which largely determines Iran’s Syria strategy, is keeping the heat on Iran President Hassan Rouhani to maintain Iran’s focus on its commitments there, despite pressure and attacks from the United States and Israel.

Last week the United States introduced sanctions under the Caesar Act “to compel the government of Assad to halt its murderous attacks on the Syrian people and to support a transition to a government in Syria that respects the rule of law, human rights, and peaceful coexistence with its neighbors,” as US Syria envoy James Jeffrey explained.

The sanctions, which come as the Syrian economy is already reeling, send a signal to the Arab world that Washington will not tolerate any normalization with Syrian President Bashar al-Assad’s government, and to Iran that its "maximum pressure" policy extends to Syria.

The latest Israeli strike on June 23 in Suweida, southern Syria, was more of Israel’s policy of "mowing the grass" to keep the pressure on Iran and degrade the capabilities of the IRGC and its proxies.

A recent tweet by former head of Israeli military intelligence Amos Yadlin shows an Israeli perspective. He wrote, “The attack in the Suweida area indicates the expansion of Iranian consolidation into this sensitive area of the Druze Mountains. This area is included in the area where the Russians pledged not to have access to Iran and Hezbollah.”

Yadlin, who is now the director of Tel Aviv University's Institute for National Security Studies, added, “The Iranians and their proxies will look for ways to respond and deter Israel. Having previously failed to respond through rockets, they recently attempted to respond with a cyber attack. We must be prepared for a whole spectrum of Shiite response options in which [Hassan] Nasrallah enters [Qasem] Soleimani’s shoes as a strategist and main operator.”

Israel considers Syria a vital front line against Iran that could heat up in coming months. Israeli intelligence sources are telling Netanyahu that the Quds Force is seeking to increase its presence in Syria, especially before November, when Netanyahu fears a resumption of a US-Iran diplomatic track, no matter who wins the US presidential election.

Some fear that Iran is consolidating its power in Syria and extending the front to a crescent that runs from Naqoura in Lebanon to the point where Syria, Jordan and Israel meet.

The Israeli assessment may be spot on.

A source working with Iran’s IRGC advisers in Syria told Al-Monitor on condition of annonymity that “Iran is there to stay” in Syria. The source recounted Iran’s role in combatting terrorist groups such as the Islamic State and al-Qaeda-linked Jabhat al-Nusra in Syria, saying that the "resistance axis" — in reference to Iran and its allies — "gave the best of its fighters and commanders to make sure the region isn’t dragged into total destruction and irredeemable disaster." The source added, “Therefore it’s only this axis who decides to stay or to leave, and for now nothing has changed.”

The United States, which opposes Iran’s presence in Syria, led a major international diplomatic and military coalition working closely with the primarily Kurdish Syrian Democratic Forces that reduced the Islamic State to a "low-level insurgency."

The scorecard on Iran’s fight against the Islamic State and al-Qaeda in Syria is less clear, but the narrative is part of the Iranian campaign.

Over the past eight years, Tehran and the "axis of resistance" it leads — including Hezbollah, Syria and proxy forces in Iraq — have been developing their rationale for involvement in Syria. From the Iranian establishment’s perspective, the mission can’t be interrupted by a hasty decision to give up and withdraw.

“Syria isn’t an uncalculated adventure, as many of those critical of Iran suggest,” the source told Al-Monitor. “It was a calculated risk and for that reason Iran decided from day one not to have a 'plan b' in Syria, and that’s why despite the billions of dollars that were poured, the tens of thousands of fighters from across the world that were sent, the American and Israeli involvement, the name of Syria’s president is still Bashar al-Assad, and we are in Syria upon his government’s request. And Iran is in the meantime standing by Syria to face the economic war that’s launched by the United States and its allies.”

Iran has reportedly upped its shipments to Syria to help the country face the newly introduced Caesar Act, just a few weeks after Iran defied US sanctions on Venezuela, in another indication that the Iranians are less concerned with short-term influence and are concentrating on the kind that crosses the Atlantic. In the minds of the leadership in Tehran, threats to uproot the Iranian presence and influence from Syria and beyond amount to threats of regime change, because the axis extending from Iran to Lebanon that has been developed in the past few years are a main pillar of Iran’s national security doctrine.

Both Iran and Israel therefore see each other as existential threats.

Iran’s coming days in Syria will be turbulent and dangerous, for the gap between what Tehran wants and what Israel seeks is threatening to become a fearful abyss that could threaten the whole region.

“Neither the assassination of Qassem Soleimani would have changed the Iranian point of view, nor would the sanctions,” said the IRGC source. “We might have differences over issues with our Russian partners in Syria. They have their plans and we have ours. In the last few months they pushed for changes in our role that didn’t meet our objectives. We refused, and it was left to the Syrians to decide on what should happen. At the end, such differences will not affect long-term strategic partnerships.”

Interestingly, Rouhani said he is open to negotiations with the United States “as soon as the White House and Congress return from the wrong path [and] offer an apology and compensate [for] the loss they inflicted upon Iran.”

In response, US Secretary of State Michael Pompeo, while announcing the latest State Department report on countries supporting terrorism, which tags the IRGC and Hezbollah as terrorist groups backed by Iran, termed Rouhani’s comment as “not remotely serious.”