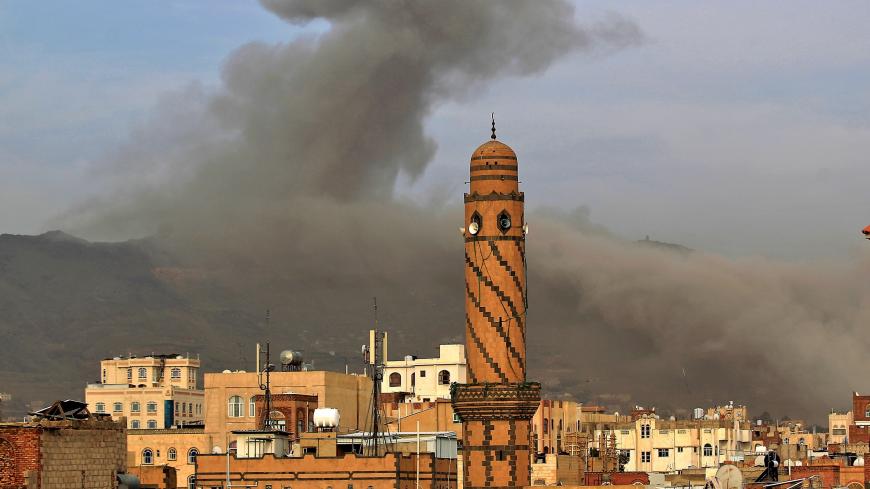 Smoke billows following an airstrike by Saudi-led coalition in the Yemeni capital, Sanaa, on June 16, 2020. Houthis retaliated with airstrikes into Saudi Arabia on June 23. - Photo by MOHAMMED HUWAIS/AFP via Getty Images

Houthi rebels in Yemen said they had fired missiles into Saudi Arabia early this morning that reached the capital, Riyadh.

However, Saudi Arabia said it “successfully intercepted and destroyed" the missiles, which it said were headed toward Riyadh. The spokesman for the Saudi-led coalition, Col. Turki al-Maliki, called the attack “a hostile, deliberate and systematic operation to target civilians and civilian objects,” according to the state-run Saudi Press Agency.

The Houthi movement, backed by Iran, has been embroiled in a civil war with the internationally recognized government, supported by a Saudi Arabia-led coalition, since 2015. The movement controls the capital, Sanaa, and other parts of the north and west. Violence between the internationally recognized government and Houthi forces has increased since a cease-fire expired last month.

The Houthi-affiliated Almasirah Media Network reported that Houthi forces launched “a barrage of ballistic, winged missiles and drones deep in Saudi Arabia,” saying the move was a response to the “Riyadh regime’s bloody military campaign.” The outlet said the forces hit Saudi military and intelligence targets in Riyadh and other parts of the country.

A Riyadh resident told Reuters there were two blasts and smoke in the sky early in the morning. There were no immediate reports of casualties or damage, according to the outlet.

The attack showcased the long-range missile capabilities of Houthi fighters. Riyadh is 990 kilometers, or 615 miles, from the Yemen border.

The attack comes at a difficult time for Yemen. Last week, Houthi rebels said a Saudi-led coalition airstrike killed 13 civilians; the coalition said the strike was aimed at armed Houthis and that civilians were not targeted. Recently, the COVID-19 pandemic has created additional misery in the war-torn country, and Houthi authorities have reportedly underreported virus cases. There is also discord in the Saudi-led coalition with the continued activity of United Arab Emirates-backed Southern Transitional Council separatists.