An Air Force C-130 Hercules struck a wall, damaging the aircraft and causing a fire onboard. 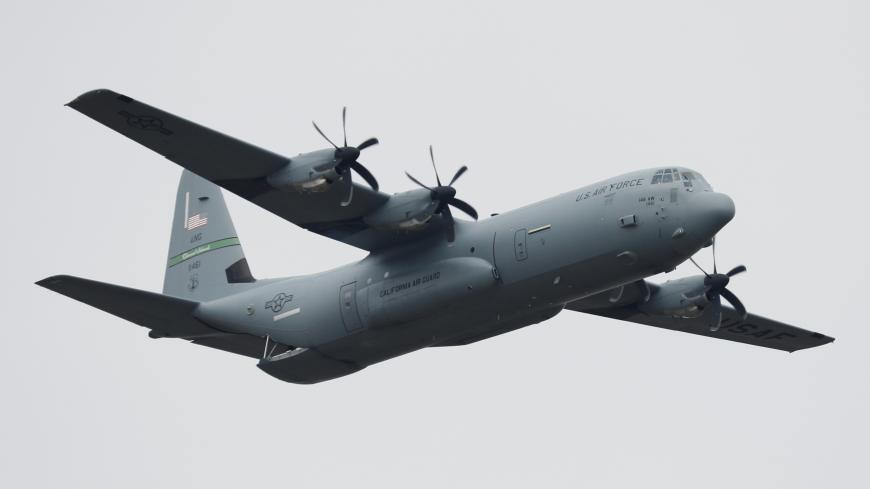 A US Air Force C-130 transport crashed in Iraq on June 8, 2020, injuring four. Here, a US C-130 flies during the Clear Sky 2018 multinational military drills at Starokostiantyniv Air Base in Khmelnytskyi Region, Ukraine, Oct. 12, 2018. - REUTERS/Gleb Garanich

Four members of the US military were injured Monday when a transport plane overran the runway at Camp Taji air base in Iraq.

The US-led military coalition said an Air Force C-130 Hercules struck a wall, damaging the aircraft and causing a fire onboard that was then put out by a response team.

The four injured military personnel were treated at Camp Taji’s medical facility, according to the coalition. A US military source with knowledge of the matter told Al-Monitor that the prognosis for the injured was “looking good.”

Three of the injured were released, an Associated Press report said. It said the plane had 26 passengers and a crew of seven Wyoming Air National Guard members, one of whom was among the injured.

The US-led military coalition against the Islamic State said in a statement Monday night that it did not suspect the accident was related to “enemy activity.”

US military personnel in Iraq consolidated earlier this year at larger garrisons Taji, Ain al-Asad and Erbil air base — a move hastened by the global coronavirus pandemic and repeated rocket attacks by local militias on US positions.