As Kuwait’s parliament gears up to discuss a draft law that, if enacted, would reduce the number of foreign workers, Egyptians in the small Gulf country fear they will have to go back to Egypt where the economy has been badly hit by the coronavirus crisis. 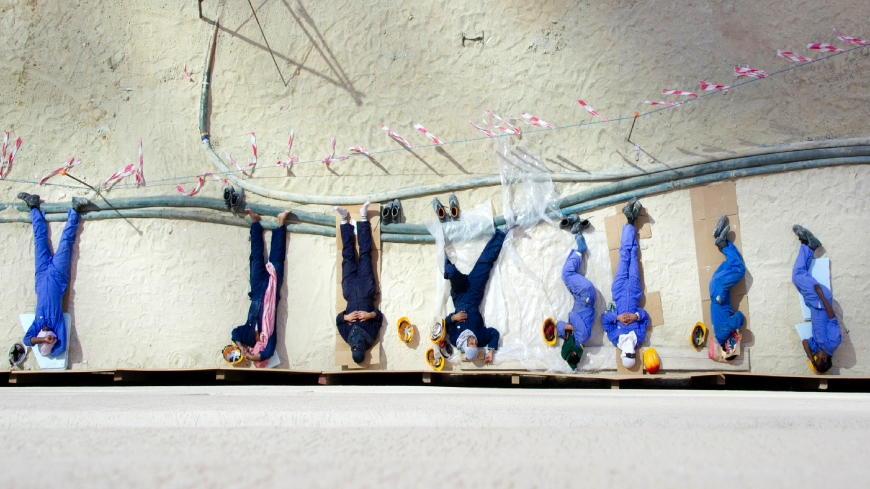 Egyptian expatriates in Kuwait are feeling wary after Kuwait's parliament proposed a draft law that would reduce the number of foreign workers in order to preserve the demographics of the country. Kuwaiti citizens are currently a minority in their country.

The proposal was presented by parliament member Badr al-Mulla, who said in televised remarks on May 27 that the draft law not only addresses how Kuwaiti citizens feel about being a minority in their own country, but it also adjusts the percentage of nationalities so that each nationality does not exceed a certain percentage as determined by the proposed law.

According to the draft law, the percentage of Indian workers would stand at 15%, Filipinos at 10%, Sri Lankans at 10%, Bangladeshis at 5%, Nepalese at 5%, Vietnamese at 5% and Pakistanis at 5%. The remaining nationalities would not exceed 3%.

The draft demographics law prohibits government agencies from renewing the residence of foreign workers, in addition to preventing the change of residence permits from domestic to private or converting visiting characteristics to work residency or joining a family.

The draft law exempts “citizens of the countries of the Gulf Cooperation Council, the spouse and children of a Kuwaiti citizen, domestic workers and workers recruited from government contracts, heads and members of diplomatic missions dispatched to Kuwait and their spouses and children under the condition of reciprocity, heads of state and members of their families, and members of military missions of countries with which Kuwait has security agreements.”

Mulla believes the new legislation helps Kuwait avoid the repeated procrastination of countries in the evacuation of their nationals for fear of exacerbating the unemployment crisis in their homelands.

Once the draft law is approved, the Kuwaiti government would commence working to reduce the number of other nationalities, according to the legislative proposal.

The proposed legislation prohibits the recruitment of any worker whose nationality exceeds the specified percentage; this remains in effect until the foreign nationality falls below the legal percentage.

The legislation also enacted a set of penalties for its violators, including 10 years of imprisonment and a fine of no more than 100,000 dinars ($325,000), or the application of one of the two penalties to every public employee who ordered or agreed to bring in a worker if the nationality to which the worker belonged exceeded the stipulated percentage.

This is in addition to five years of imprisonment and a fine of 50,000 dinars ($162,000) for each public employee who contributed to converting a person's visit to a work residence or renewing it in a different way, in addition to dismissal from the job.

According to data of the Central Administration for Statistics issued in January 2019, the population of Kuwait reached 4,420,110 — 1,335,712 were Kuwaitis, while the number of foreign workers and residents reached 3,084,398.

Egyptian expatriates in Kuwait are feeling cautious after the announcement of the draft law; some fear an uncertain future in their own country.

“I have been living here for 30 years and I do not know [if] when I come back to Egypt I will find a job or not,” one Egyptian expatriate told Al-Monitor on condition of anonymity.

Hanafi Mahmoud, an expatriate who works as a physician, said Kuwait relies heavily on foreign workers in various businesses and sectors, and losing them would harm the Kuwaiti economy and businesses.

“It is both detrimental to the Kuwaiti economy and the Egyptian expats who have been working there for years,” he told Al-Monitor.

“[In] parliament, we have agreed to distribute the coming workforce from Kuwait among different sectors in accordance with their specializations,” Bassant Fahmy, member of the parliament’s economic committee and an economist, told Al-Monitor.

About 4,000 illegal Egyptian expatriates out of 6,000 in Kuwait have returned home over the past few weeks in the wake of the coronavirus outbreak.

Fahmy said the parliament has agreed to provide jobs for these employees whether through the small- and medium-sized enterprises law or through the public-private partnership law.

“We are happy with the return of the Egyptian expatriates from Kuwait, and we hope this will contribute to our national economy,” she told Al-Monitor.

But some economists say that many of the workers coming from Kuwait would be considered irregular workers, or workers who are paid daily and work without health insurance or social security. Irregular workers in Egypt are already suffering due to the coronavirus lockdown.

Hassan el-Haywan, an economics professor at Ain Shams University, said that many irregular workers are suffering amid the coronavirus pandemic, and with the arrival of the workers repatriated from Kuwait, the problem will be exacerbated.

The government has already given a grant of 500 Egyptian pounds (about $31) to irregular workers already present in Egypt.

Several economic sectors, in particular trade and tourism, have already been devastated by the coronavirus lockdown. Egyptian officials say billions of dollars are being lost monthly because of suspended trade and tourism.

“Unemployment rates will soar, and more and more people will not be able to afford their needs amid the economic crisis now taking place in Egypt,” Haywan told Al-Monitor.