Will Covid-19 put an end to hookah culture in Egypt?

Once a symbol of Egypt’s cafes and mentioned through history, hookahs are slowly disappearing from society amid the closure of cafes across the country due to the coronavirus pandemic. 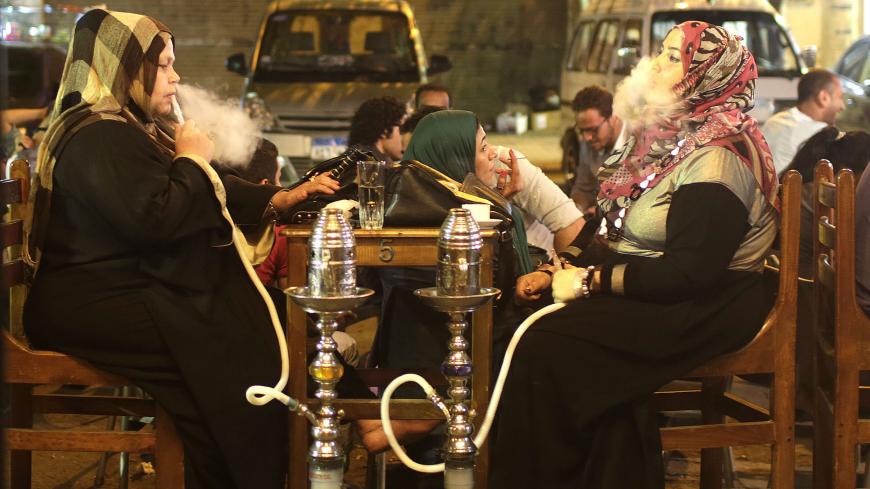 Almost at every corner in Egypt, cafes used to serve millions of people on a daily basis. Hookah lovers would sit for hours smoking tobacco while busying themselves with their mobile phones or watching TV. Those who have a passion for soccer would simply sit in rows watching their favorite sport live on big screens.

The coronavirus pandemic has put an end to all of these scenes in a country that used to stay up until all hours of the morning. Many cafes that used to stay open all day have changed their businesses from serving hookah to selling fruit and vegetables or detergents.

In the old Fatimid Cairo area where tourists used to swarm cafes to savor the taste of Egyptian tobacco, there is no more puffing — which was a local habit that began in the 19th century, as British traveler Edward William Lane (1801-1876) narrated in his “Manners and Customs of the Modern Egyptians.”

“I don’t know what happened really. This is like a nightmare for me. I used to earn around 3,000 pounds ($190) per day just a few months ago. The coronavirus pandemic has changed my whole life altogether. I had to switch to selling detergents as I have no other income resources,” Mohamed Khalaf, an owner of a cafe in Cairo, told Al-Monitor.

Khalaf, who has been in the cafe business for 20 years, said the coronavirus created an unprecedented situation for his cafe. “For the very first time in my life, I couldn’t afford the cafe’s monthly rent. That’s why I started to sell detergents in May. I cannot pay the rent for a closed shop,” he said.

The Egyptian cafes, known for their hookah and crowds of customers all year round, provide millions of informal jobs feeding hundreds of thousands of families in Egypt.

As for the workers, Khalaf sadly said layoffs were inevitable.

“I had six workers. I kept one for my new detergent business. The five others have families. I hope they get settled soon,” he said.

Hookah, or — as Egyptians call it — shisha, is considered a primary cause of colds and the flu, not to mention congestions at cafes.

In a country where cafes used to serve hookah with various flavors, Egyptian shisha smokers have no place but their homes to smoke. A distinguishing aspect of many street corners across the country, the sound of water pipes has vanished since March 24 when Egyptian authorities shut down all cafes.

“Things will never be the same for hookah lovers. Cafes, when [they] reopen, won’t serve hookah for health reasons. Even when this [coronavirus] tragedy is over, the pre-pandemic lifestyle of Egyptians will never be back,” Samy Abdel Baki, a 42-year-old lawyer, told Al-Monitor.

“I used to go downtown to sit at cafes in the Hussein district, especially at night. The area was full of places where people would smoke shisha. Now with the coronavirus, all are closed until further notice,” Abdel Baki said.

Egyptians spend around 40 billion pounds ($2.5 billion) a year on cigarettes and hookah molasses, according to the state-run Central Agency for Public Mobilization and Statistics.

“My wife would never allow me to smoke shisha at home. The cafes were the perfect place for a puff. So I have given up smoking hookah since the government closed cafes,” Abdel Baki said.

“Some coffee shops in the Hussein district used to entertain people from all walks of life. Tourists from various nationalities and women used to smoke tobacco flavors such as apple, peach and mint. All of that has vanished as if it never existed. Even if the government decides to reopen cafes, I think shisha will be banned for good,” he said.

Cafes have been a major part of Egyptian culture and history, where politicians, poets and novelists were everyday customers. Late Egyptian Nobel-laureate Naguib Mahfouz (1911-2006) employed cafes as eventful places in his novels like “Karnak Cafe.”

“During breaks, I used to go for a hookah puff at a cafe near my school. My workmates did the same thing. It was our daily socializing. Now, with social distancing and fears of infection, no more hookah — and many cafes changed their business,” Ezzat Adel, a 50-year-old history schoolteacher, told Al-Monitor.

“Naguib Mahfouz was infatuated with cafes, which played a significant role during the Egyptian Revolution of 1919 against the British colonizers at that time. I wonder how Egyptians will do without cafes or the bubbling noise of hookah,” Adel added.