In Upper Egypt, while men come together for shisha, women relax by chewing a mix of tobacco and tar — yet health professionals warn of the many dangers. 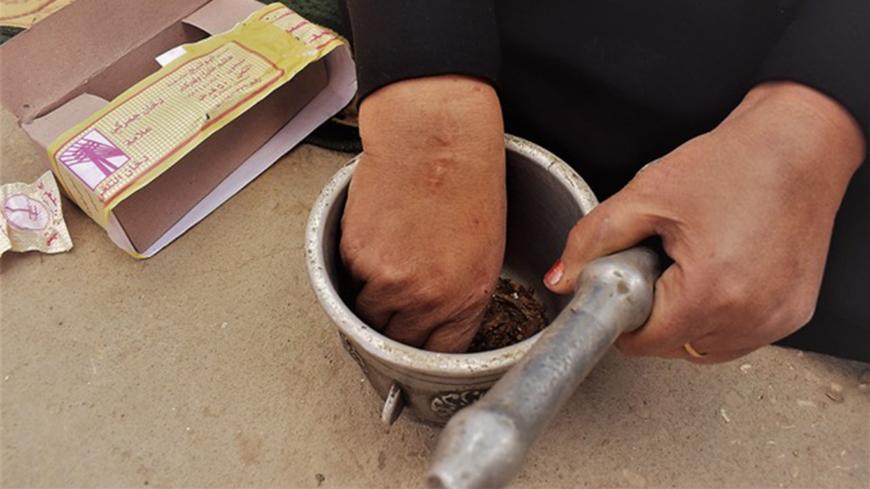 ASYUT, Egypt — As the sun sets in the village of al-Nawawara, most men either head to a cafe or sit in front of their houses to smoke shisha. Women gather in groups to chat, while chewing on what they call “qatrouna,” better known in Egypt as “madgha” or "chewing tobacco."

Al-Nawawara, which is 150 kilometers (93 miles) south of Asyut and situated along the Nile, is a large village with red brick houses. Upon entering the village, a cafe where men smoke shisha and play dominos stands out.

At the house of Atiyat Nour, a 55-year-old housewife, two guests sit on a small carpet and sip tea, while Nour holds on to a small bag, with the words “duty-free tobacco” in Arabic written on it. She empties the content of the bag into a bowl and grinds it for 10 minutes, until it becomes soft and brown.

"We call this qatrouna, although the name differs depending on the region,” she told Al-Monitor. “It is a mix of tobacco leaves and tar sold in the small shops in the village. A package of 40 grams [1.4 ounces] costs only 1 Egyptian pound [$0.05]. Once you grind it well, it becomes soft and chewable.”

Nour then distributes some to the women sitting next to her and puts what is left in a container, which she then places in her right pocket. The three women put small pieces of the mixture on their fingers, and then chew the substance between their gums and lips for 10 minutes. They spit out what is left.

Naguibe Mohamad, one of the women, said, “Women in our village and the surrounding villages have gotten used to chewing qatrouna as a type of popular relaxant. I inherited this habit from my grandmother, and chewing qatrouna puts me in a better mood.”

Many women use qatrouna as medication, believing that it cures headaches, toothaches and pain in general. Mohamad noted that she chews qatrouna daily to avoid muscular pain and headaches.

However, according to Youhanna Bichay, a general doctor in the city of Bandari in Asyut governorate, qatrouna itself is to be blamed for the headaches. He told Al-Monitor that he sees many women in his clinic who suffer from stomach cramps and digestive problems, and that he tries to warn them of the risks caused by the habit of tobacco chewing.

Noting that qatrouna contains four times more nicotine and tar than regular cigarettes, Bichay claims that the long-term habit of chewing qatrouna increases the risk of cancer. He also calls qatrouna "highly addictive," explaining that many people who use qatrouna regularly find it difficult to quit.

“[The habit of] chewing qatrouna is spreading in many villages in Asyut and south Minya. It has even reached Sohag and Qena governorates,” he said, noting that Abu Tig Factory, a tobacco factory in Asyut, sells this combination of tar and tobacco at low prices, which many women can afford.

“Many men — as well as women — take it as a relaxant and analgesic to treat headaches and pain. It is dangerous due to the combination of nicotine and tar,” he said. “Unfortunately, there are no statistics on the fatalities due to qatrouna-related diseases.”

According to statistics published on May 30, 2017, by the Central Agency for Public Mobilization and Statistics, 20.2% of over 15-year-olds are smokers. Families who smoke tobacco spend an average of 3,968 Egyptian pounds ($225) per year. But the statistics do not indicate the number of victims of tobacco-related diseases. Tobacco Atlas, an annual publication and its website that seeks to create awareness of the harmful effects of smoking, states that 957 men and 218 women die from tobacco-related diseases every week in Egypt, according to 2016 figures.

But for most of the women chewing qatrouna, the habit is associated with socializing and pleasure, not disease and fatality. Khayriya, a housewife from the village, told Al-Monitor, “Men gather around and smoke hashish and opium on happy occasions, while women chew qatrouna in the house and sing and chat.”