The Ministry of Health in the Gaza Strip issued a decision to ban e-cigarettes, claiming that they are bad for citizens' health, which sparked angry reactions. 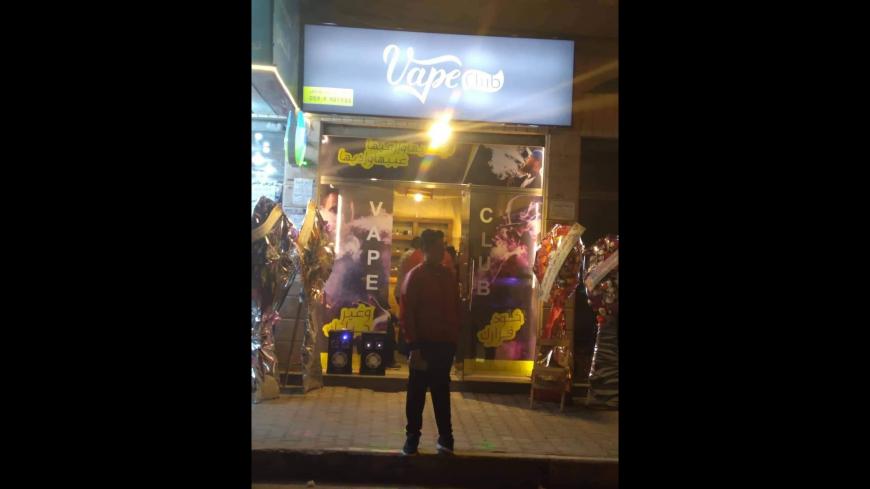 A vape store in Gaza City, Gaza Strip, seen in a picture uploaded May 26, 2019. - Facebook/Vape.Gaza

GAZA CITY, Gaza Strip — Nael Abu Diya quit smoking a year and a half ago, after having been addicted to cigarettes for 13 years. He has been smoking e-cigarettes as a substitute for tobacco ever since.

However, the Oct. 6 decision by the Ministry of National Economy in the Gaza Strip to ban the entry and import of electronic cigarettes and shishas due to health risks angered Abu Diya and fellow e-cigarette smokers, who took to social media.

Abu Diya, a public servant who lives in Gaza City, told Al-Monitor, “I succeeded in quitting smoking tobacco by resorting to e-cigarettes, which saved me a lot of money. I spent around 450 shekels [$128] a month on regular cigarettes. Now I just pay 50 shekels [$14.25] per month for e-cigarettes.”

A pack of cigarettes costs on average 15 Israeli shekels ($4.25) in the Gaza Strip. Before he quit smoking, Abu Diya would buy one pack a day, at least. The average e-cigarette cost is 200 shekels ($57), a one-time expense. The cost of the liquid nicotine amounts to 25 shekels ($7.10). Abu Diya buys two packs of e-cigarette liquids per month.

He said he has about 30 friends and relatives in Gaza who quit smoking tobacco after trying e-cigarettes. He believes the decision to ban e-cigarettes “aims primarily at encouraging citizens to buy regular cigarettes again,” because an increase in tobacco smokers means more cigarettes are sold and more taxes paid.

Abdul Fattah Abu Moussa, director general of the Consumer Protection Department at the Ministry of Economy in Gaza, defended the decision and told Al-Monitor, “The liquids inside e-cigarettes in Gaza are manufactured by amateurs who use chemicals and do not follow proper standards. Citizens consequently face the risk of contracting dangerous diseases. Therefore, we decided to issue this decision.”

He added that the decision is similar to those in other countries, such as France, India and some US states, following the death of several e-cigarette smokers.

On Oct. 11, the Centers for Disease Control and Prevention, which is affiliated with the US government, published data stating that 26 deaths had been confirmed in 21 US states and 1,299 cases of lung injury had been reported across the United States as a result of e-cigarette use.

Although Gaza's Ministry of Health did not report any health complaints due to vaping, ministry spokesman Ashraf al-Qudra told Al-Monitor, “The decision to ban e-cigarettes is up to the Ministry of Economy, and we have no comment on the matter.”

Editor-in-Chief of Al-Eqtesadia newspaper in Gaza Mohammad Abu Jiab told Al-Monitor, “The decision to ban the entry of e-cigarettes to Gaza is not linked to health hazards as much as it is related to economic risks. Decreasing tobacco sales in local markets have had negative repercussions on the Treasury of the Ministry of Finance in Gaza, as tobacco is the main source of financial revenue.”

Abu Jiab said the estimates of his sources indicate that tobacco taxes decreased by 30% to 40% in early 2019.

Haitham Jundiyeh, who owns Vape Gaza store that sells electronic cigarettes and shishas in central Gaza City, told Al-Monitor, “The decision is unjustified and unclear. We were surprised and I believe the main goal is to face the decreasing tobacco revenues.”

He noted that there are no companies specialized in importing e-cigarettes and shishas in the Gaza Strip, as these products arrive to Gaza through online purchases from websites such as AliExpress.

Besides, some Palestinians who travel to Egypt buy these products there and sell them to specialized stores in Gaza. The local authorities cannot impose taxes on these informal transactions.

Jundiyeh added that e-cigarettes became popular in the Gaza Strip in early 2015, and three years later their sales increased due to the low cost of e-cigarettes. Dozens of tobacco shops now sell electronic tobacco products and employ young people for the production of e-cigarette liquids.

While there are no official statistics about the number of e-cigarette smokers in the Gaza Strip, Jundiyeh said, “I have noticed that around 7,000 people follow groups on Facebook such as the Gaza Vape Market, which includes more than 4,300 e-cigarette users.”

Mohmed Fouad wrote Oct. 7, “Banning e-cigarettes and leaving regular cigarettes and shishas under the pretext of public interest are false excuses. The ban is in the interest of the customs authorities.”

Addressing the decision-takers, Nader Hilles wrote Oct. 7, “Sir, you are embarrassed. You claim that your revenues were impacted by the spread of this invention [e-cigarettes], and you used the citizens’ safety as an excuse, as usual.”

Palestinian caricaturist Alaa Allagta posted Oct. 7 a caricature showing a regular cigarette, with the caption, “Dear citizen, e-cigarettes are harmful for your health and the main cause of cancer. We advise you to quit.”

Abu Moussa disagrees with those who accuse the ministry of issuing the decision in order to face the decreasing tobacco revenues. He said, “We took the decision because we care about people’s health. Several medical studies and reports confirm that e-cigarettes are more dangerous than tobacco.”

He stressed that the ministry has begun implementing the decision to ban production of any e-cigarette products in Gaza or their imports from abroad. “The products of whoever violates the decision will be confiscated, and that person will be legally liable. Their store might even be shut down,” he concluded.