In cooperation with the World Health Organization, Egypt launched the first observatory to monitor tobacco companies in the Middle East, as the country faces a growing number of tobacco users. 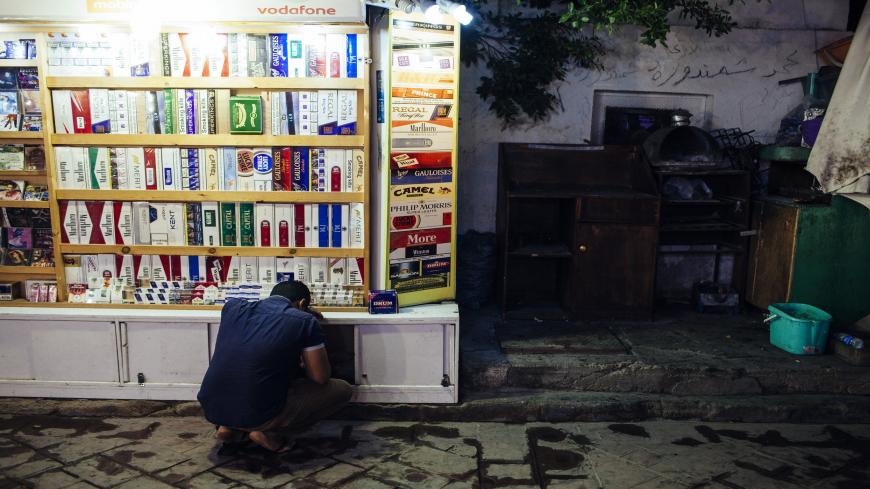 An Egyptian man kneels down at a small cigarette stall on a restaurant strip popular with tourists in the Red Sea resort town of Sharm el-Sheikh, Egypt, Oct. 26, 2013. - Ed Giles/Getty Images

CAIRO — Egypt’s Association against Smoking, Tuberculosis and Lung Diseases launched Dec. 22 the first observatory for tobacco control in Egypt and the Middle East to monitor any violations on the part of tobacco companies.

Essam el-Moghazy, chairman of the association, said in a phone interview with the Egyptian Mesat Channel Dec. 23 that Egyptians consume 4 billion packs of cigarettes annually, i.e., 80 billion cigarettes, at a cost of more than 70 billion Egyptian pounds ($4.4 billion). In addition, Egyptians consume 50,000 tons of muassel (tobacco used for hookah), costing 3 billion pounds ($191 million) a year, and other types of tobacco that include cigars and pipes.

Moghazy said that smoking reduces the body’s immunity system, making it vulnerable to complications from the coronavirus.

He also stressed that tobacco companies make profitable gains from this industry and do not prevent direct sales to minors or those under 18, adding that these companies even pay some scientists to claim that smoking protects against COVID-19 without relying on any scientific data.

Commenting on the mechanism of the assoctiation's work, Moghazy explained, “One of the methods the association will follow is to prevent direct and indirect advertising of tobacco companies, prevent advertising campaigns that promote donations from such companies to hospitals or oncology institutes, while they are in fact promoting their own products and causing the death of thousands of citizens suffering from respiratory diseases and cancer.”

The latest statistics of the Central Agency for Public Mobilization and Statistics showed that consumption of tobacco, alcoholic beverages and drugs amounted to 25% of the Egyptian households’ spending. The statistics also showed that 171,000 people die annually due to smoking-related diseases; smokers aged between 15 and 69 make up 22.7% of the total population, with those aged between 30 and 44 being the largest group. Male smokers who smoke daily make up 81.4% of the total male smokers, compared to 18.6% for nondaily smokers. Hookah smoking appears to be increasing with age, as the proportion of those aged between 15 and 29 is 17.2%, compared to 27.3% for smokers aged between 60 and 69.

Muhammad Amin, a doctor specializing in respiratory diseases and allergies, told Al-Monitor via phone, “Smoking is extremely bad for the health under normal circumstances, and now with the coronavirus it amounts to a health disaster. The hot air resulting from smoking enters the lungs’ airways, where the hairs [cilia] that are similar to nasal hairs are shook 20,000 times. In addition, nicotine that fills the lungs is poisonous and destroys the respiratory system’s cells, causing cancerous diseases and infections. Also, [smoking causes] normal cells to turn into carcinogenic cells inside the body — not to mention catarrh, bronchial asthma, pneumonia, enlargement of the heart muscle and respiratory failure.”

He said, “COVID-19 is primarily a respiratory disease, meaning that it attacks the lungs. Comparing the lungs of smokers and non-smokers, we find that smokers’ lungs are twice or three times more susceptible to be infected with the coronavirus,” noting that medical analysis shows that smoking reduces the immune response to the virus. “If we are to compare the airways to high walls that protect a castle, then smoking is like making holes in these walls,” he added.

Moreover, the World Health Organization stated, “Tobacco use may increase the risk of suffering from serious symptoms due to COVID-19 illness. Early research indicates that, compared to non-smokers, having a history of smoking may substantially increase the chance of adverse health outcomes for COVID-19 patients, including being admitted to intensive care, requiring mechanical ventilation and suffering severe health consequences.”

It continued, “Smoking is already known to be a risk factor for many other respiratory infections, including colds, influenza, pneumonia and tuberculosis. The effects of smoking on the respiratory system makes it more likely that smokers contract these diseases, which could be more severe. Smoking is also associated with increased development of acute respiratory distress syndrome, a key complication for severe cases of COVID-19, among people with severe respiratory infections."

A 2019 statistical study by the Cairo Center for Economic Studies and Alastaratejah showed that Egypt was among the top 10 countries whose population smokes all kinds of tobacco, with daily consumption of 280 million cigarettes in 2017-18. According to the statistics, Egyptians consumed 83 billion cigarettes in 2017-18, at a cost of 73 billion pounds ($4.6 billion), while the consumption of muassel reached 50,000 tons a year, costing 3 billion pounds ($191 million).