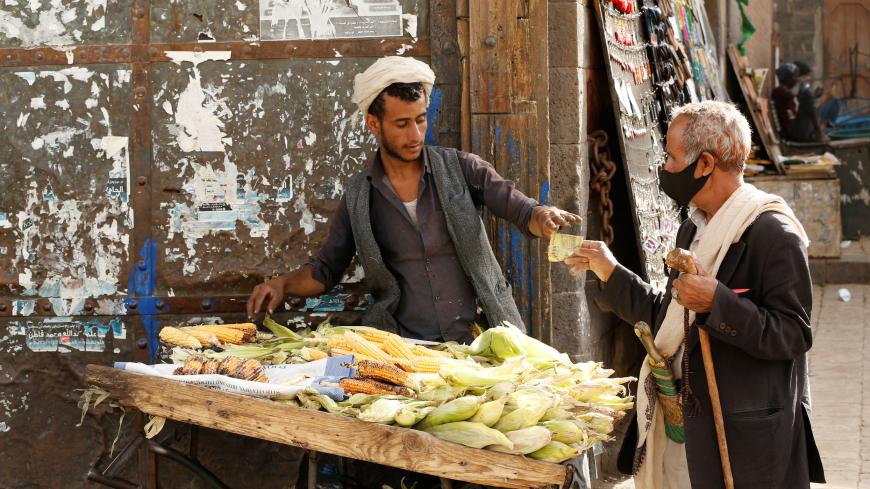 A man wearing a protective mask buys corn from a street vendor at a market amid novel coronavirus concerns in the Old Quarter of Sanaa, Yemen, June 2, 2020. - REUTERS/Khaled Abdullah

UN: Yemen 'hanging by a thread'

Guterres said Yemen is "hanging by a thread" with its institutions "facing near collapse" and its economy "in tatters." Out of an estimated population of 28 to 30 million, a staggering 24 million need assistance. Four million are displaced. Just this year, 110,000 Yemenis have contracted cholera. Seasonal floods could spark malaria and dengue fever outbreaks as well. Nearly half its population is under 15. A recent report by the UN Economic and Social Commission for West Asia explains the negative long-term impact of conflict on children’s development in Yemen and other Arab countries.

Although there are so far just 453 reported cases of COVID-19 in Yemen, there have been 103 deaths, producing a mortality rate of 22.7% (compared to 5.8% worldwide). Because of the war and Yemen’s broken health infrastructure, the number of infected is believed to be much higher.

The donor conference this week, hosted virtually by the United Nations and Saudi Arabia, produced $1.35 billion in pledges, just over half of last year’s contributions.

Saudi Arabia, which has been an active participant in the Yemeni civil war, pledged $500 million, more than a third of all conference pledges.

Abdullah Al Rabeeah, the supervisor of the King Salman Humanitarian Aid and Relief Center (KSRelief), told Elizabeth Hagedorn that Saudi aid will be channeled to areas controlled by the Houthis, who have been at war with the Saudi-led coalition and are backed by Iran. Houthi separatist militias are reportedly using World Health Organization ambulances and diverting WHO-supplied COVID-19 materials to their military hospitals, a report that was confirmed to Al-Monitor by a WHO official.

“We will continue to work with our key partners, donors and UN agencies and others to do the necessary monitoring to minimize any divergence,” Rabeeah said. “We believe that the Yemenis living in those regions deserve our attention.”

KSRelief, established in 2015, has provided more than $3 billion in assistance to Yemen.

Rabeeah dismissed reports by the UN and human rights groups that Saudi-led coalition forces deliberately targeted hospitals and civilians in the past.

“I can assure you Saudi Arabia did not direct any airstrikes on the health care system,” Rabeeah said. “If it has happened, it’s by mistake and we do not shy from making that public to the media. We coordinate with many UN and non-UN agencies to ensure that vital, important structures will not be targeted.”

UAE Ambassador to the United States Yousef Al-Otaiba told Al-Monitor that the challenge in Yemen today is no longer the actions of the Saudi-led coalition, but rather the increased fracturing of the Yemeni parties themselves, who “cannot come to an agreement” about the future of their country.

The UAE, a Saudi ally, withdrew from combat activity in June 2019, except for longstanding counter-terrorism operations.

Rabeeah said Saudi Arabia will likely end up giving more than pledged and that he expects the United States, which had already committed $225 million prior to the conference, will contribute more by the end of the year.

Meanwhile, gunmen killed photojournalist Nabil Hasan al-Quaety, another casualty in the assault on journalists and press freedom by warring sides in the war-torn country. Four Yemeni journalists have been sentenced to death by Houthi separatists for spreading "fake news," Ammar al-Ashwal reports.

Guterres tweeted that “ending the war is the only solution.” We explained in April why, in principle, Yemen should be too big to fail, and that absent a lasting cease-fire and political transition, Yemen, as well as Libya and Syria, risk collapse and chronic poverty and fragility.

The World Bank reports that the Palestinian economy is headed for an alarming downturn in an already dire situation because of COVID-19.

According to the bank, the Palestinian economy is expected to shrink between 7.5% and 11% this year. A decline in revenues and increased spending to deal with the pandemic could lead to the Palestinian Authority budget deficit increasing from $800 million in 2019 to $1.5 billion in 2020. The percentage of poor households is projected to rise to 30% in the West Bank and 64% in Gaza. Youth unemployment is 38%. The report recommends that Israel and the PA agree on a new process on exit fees for the Allenby/King Hussein Bridge and that the PA shift to less regulation and take steps toward a digitally based economy.

Israel collects the tax revenues for the PA on imported goods. Rina Bassist reports that Israel stopped deducting from those tax revenues the PA’s payments to families of Palestinians imprisoned in Israel or killed while committing terrorism, per a 2018 law backed by Yisraeli Beitenu leader Avigdor Liberman. The halt in deductions came because Defense Minister Naftali Bennett failed to submit a required report.

Daoud Kuttab reports on Palestinian diplomacy with the European Union, United Nations and Russia, to the exclusion of the United States (the fourth member of the Quartet) to attempt to gain traction on an alternative to the Donald Trump administration’s "peace to prosperity" plan.

Although Jordan appears to have so far managed the COVID-19 crisis with only 765 reported cases (in a population of over 10 million) and just nine deaths (a 1% fatality rate), the economic costs may be catastrophic.

The International Monetary Fund notes these positive steps, but reports that the "near-term economic outlook has worsened considerably." Jordan’s output is expected to decline, the fiscal deficit to grow, public debt to spike and a $1.5 billion balance of payment gap.

William Christou reports on how Israel’s threats to annex settlements in the West Bank and Jordan Valley may impact US-Jordan security cooperation.