The COVID-19 pandemic has officially struck Yemen, which war and poverty have left with a health care system in shambles. 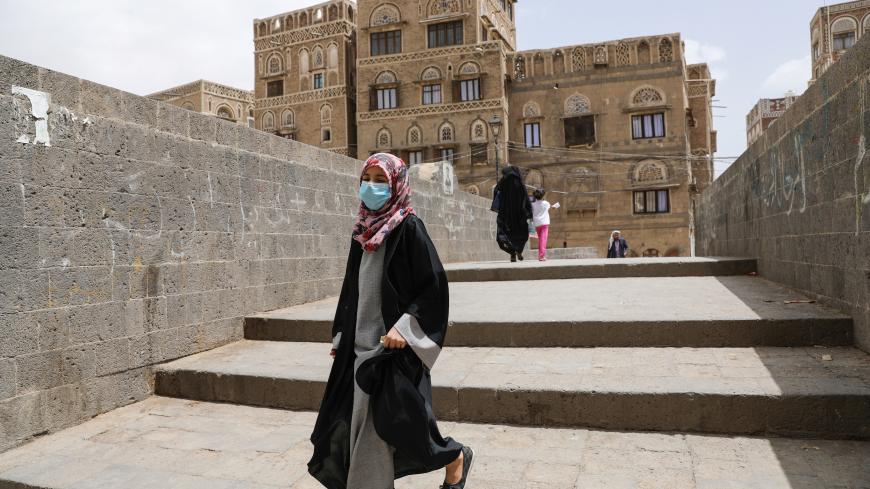 A girl wears a protective face mask amid fears of the spread of the novel coronavirus (COVID-19) in Sanaa, Yemen, March 17, 2020. - REUTERS/Khaled Abdullah

Yemen reported its first case of COVID-19 today, raising the specter of calamity in the poverty-stricken country whose health care system has been destroyed by five years of conflict.

The patient was identified as a male Yemeni working in the port of Ash Shihr in the southern oil-producing area of Hadhramout, an official committee linked to the internationally recognized government led by President Abed Rabbo Mansour Hadi announced via Twitter.

The UN has warned that the spread of novel coronavirus in Yemen that has infected over 1.6 million people worldwide could spell catastrophe.

Few hospitals have been left untouched in the bloody war pitting the US-backed and Saudi-led coalition supporting Hadi against the Houthi rebels who are allied with Iran.

The UN says only 51% of the country’s health centers are fully functional and that there are only 500 ventilators and two testing sites for a population of 30 million.

At least 100,000 people are thought to have already perished in the conflict that has spread famine and disease.

The country has also been ravaged by one of the worst outbreaks of cholera in modern times and most recently by dengue fever in Hadramouth, one of the worst hit provinces. The fever produces symptoms similar to COVID-19. With few if any testing kits at hand, it’s hard to tell the difference.

On March 20, Doctors Without Borders reported repeated attacks and armed violations against its staff in the city of Taiz in southwestern Yemen.

“In a series of particularly shocking incidents, including one in October 2019 and another in January 2020, armed intruders killed patients receiving medical care inside the [al Thawra] hospital,” the report said, adding that the violence was scaring off medical staff and patients alike.

Some 80% of Yemen’s population relies on aid. Nearly 3.6 million people have been displaced by the conflict. The UN’s World Food Program announced today that it was halving aid to areas under Houthi control. The decision stems from aid cuts by donors, notably the United States, who say the rebels are diverting and weaponizing aid to promote their own agenda.

Lisa Grande, the UN’s senior representative in Yemen, told the BBC the cut “could not have come at a worse time, with COVID-19 threatening.”

Meanwhile, Saudi Arabia announced a unilateral cease-fire on Wednesday to allow for talks between the warring sides and to prevent the spread of the virus. The kingdom says it will contribute $500 million to the UN’s humanitarian response plan for Yemen this year and a further $25 million to help Yemen deal with the coronavirus threat.

The Houthis have disparaged the cease-fire announcement as a “political and media maneuver.”

Secretary of State Mike Pompeo hailed the move today, tweeting, “Pleased to see the Saudi-led Coalition’s announcement of a unilateral ceasefire in #Yemen.” Pompeo urged the Houthis to “respond in kind.”