Saudi Arabia’s top aid official is in the United States to convince lawmakers and the US aid agency that it has Yemenis’ best interests at heart. 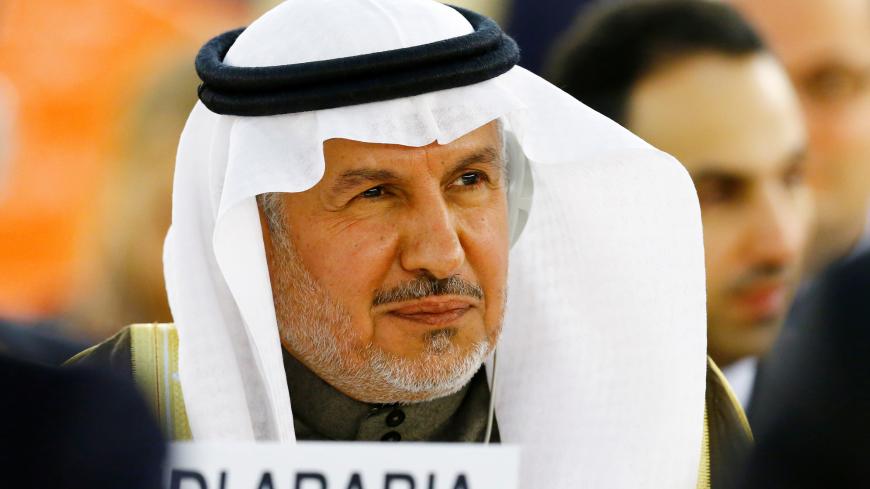 Abdullah bin Abdulaziz al-Raabeah, the head of the Saudi Arabia delegation, attends the High-level Pledging Event for the Humanitarian Crisis in Yemen, at the United Nations, in Geneva, Switzerland, April 25, 2017. - REUTERS/Denis Balibouse

Saudi Arabia dispatched its top humanitarian aid official to Washington this week amid a growing US backlash against the kingdom’s war in Yemen.

Abdullah bin Abdulaziz al-Raabeah, the head of the King Salman Humanitarian Aid & Relief Center (KSrelief), is making the rounds with policymakers, journalists and think-tank experts to tout the country’s relief efforts amid what the UN calls the world’s worst humanitarian crisis. In an exclusive interview with Al-Monitor in between meetings with Senate staffers and the US Agency for International Development (USAID), Raabeah defended Riyadh’s record in Yemen.

“I don’t want anybody to think that Saudi Arabia wants any harm for Yemen,” Raabeah told Al-Monitor. “Saudi Arabia is there to help Yemenis. We’re there to see stability, to see safety.”

In particular, the Saudi official is making the case that international assistance should be relocated to new ports away from rebel-controlled areas, including in Saudi Arabia. The push comes amid increasing US and international resistance to Riyadh’s de facto blockade of Yemen’s largest port, Hodeidah, which is in Houthi hands.

Raabeah’s visit comes as the March 2015 Saudi-led intervention to restore the UN-backed government of President Abed Rabbo Mansour Hadi has contributed to a famine and public health crisis in what was already the Middle East’s poorest country. Riyadh and its partners have been accused of indiscriminately bombing civilian targets, such as schools and hospitals, in addition to the Iran-backed Houthi rebels they are fighting.

KSrelief was established in 2015 shortly after the Saudi coalition began bombing Yemen. Promotional materials distributed by Saudi lobbyist Qorvis MSL indicate that the agency directs 82.6% of its budget to Yemen, providing the war-torn country with $847.6 million between 2015 and 2017.

Meanwhile, the United Nations has requested that member states contribute $2.3 billion to humanitarian relief efforts in Yemen, of which only $1 billion — or 44% — has been raised to date. In an uncharacteristically blunt statement, David Beasley, the executive director of the UN’s World Food Program, told Reuters in September that Saudi Arabia should end the war or pay for 100% of humanitarian assistance to Yemen. Riyadh says it has provided $8.2 billion in aid to Yemen from 2015 to 2017.

“I don’t want anybody to think that Saudi Arabia wants any harm for Yemen,” Raabeah told Al-Monitor. “Saudi Arabia is there to help Yemenis. We’re there to see stability, to see safety.”

Raabeah said KSrelief operates 153 projects in Yemen, ranging from medical treatment for victims of the war and the country’s cholera epidemic to public health, sanitation, food security and the rehabilitation of child soldiers pressed into combat by Houthi militias. He also stressed that KSrelief operates throughout Yemen, including in Houthi-controlled areas, pointing to KSrelief-supported hospitals in Saada and Hajjah.

Humanitarian organizations remain extremely skeptical of Saudi Arabia’s good intentions. While they recognize that KSrelief may earnestly be seeking to help Yemenis, they point out that it exercises little control over Saudi Arabia’s wartime policy decisions.

“Yemen is the biggest food security emergency in the world today,” Scott Paul, the humanitarian policy lead for Oxfam America, told Al-Monitor. “The Saudi-led coalition is conducting hostilities in a way that is exacerbating the crisis itself.”

The coalition has come under intense international scrutiny for its high volume of civilian casualties. A UN report published Sept. 5 blamed Saudi Arabia for more than half of the 5,144 civilian deaths documented between March 2015 and August 2017, and it called for a probe of human rights abuses in Yemen. Human Rights Watch has accused the coalition of directly targeting civilians. The rising death toll, in turn, has put pressure on the United States to end its de facto support for the campaign through its refueling of coalition planes and munitions sales to Saudi Arabia and the United Arab Emirates.

"A lot of what people read in public has to do with civilian casualty incidents, but some of the most damaging impact of airstrikes has been on critical economic infrastructure,” said Paul.

Paul pointed to the coalition bombing of farms, bridges, hospitals, schools and ports, particularly the bombing of cranes used to unload cargo, including food assistance, at Hodeidah. The Saudi coalition infuriated international aid groups when it destroyed five of the port’s seven cargo cranes in 2015, greatly hampering ships’ abilities to unload humanitarian assistance and commercial goods. Paul estimated that about 80% of the Yemeni population is in need of food assistance and that 70% of Yemen’s food and fuel imports go through Hodeidah.

The UN Security Council, hoping to forestall a coalition offensive on Hodeidah that would further devastate humanitarian aid, has proposed turning the port over to a neutral authority, but the Houthis have not agreed to the proposal. And while USAID has paid to replace the five cranes to Hodeidah to offload goods, the cranes remain stalled in Dubai as Saudi Arabia refuses to permit their installation until the Houthis turn Hodeidah over to a third party.

"Saudi Arabia would love to see Hodeidah work in full capacity, so they would love to see the cranes being installed,” Raabeah told Al-Monitor. “However, Hodeidah is being controlled by militia groups, and they are actually violating international humanitarian law. They are putting high dues on both humanitarian and commercial ships, and they are either confiscating or hindering the movement of shipments.”

Raabeah suggested seeking new Yemeni ports for humanitarian aid shipments, adding that Saudi Arabia is contributing four cranes to ports at Aden, Mukalla and al-Mokha. He also argued for using Saudi Arabia’s large port in Jizan along the Red Sea coast near the Yemeni border, which KSrelief already uses to distribute its aid to Yemen, as another point of entry. 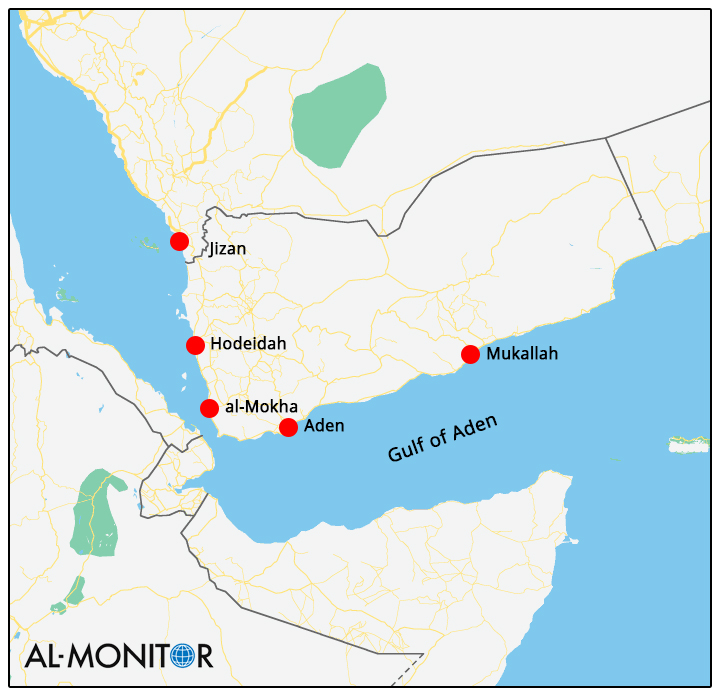 Paul, however, questioned whether Yemen’s other ports can handle the kind of traffic that comes through Hodeidah.

“Most other ports in Yemen don’t have either the piers or the infrastructure to accommodate the kind of imports you want,” Paul said.

He also pointed to the relative isolation of most ports, meaning that assistance through Jizan in Saudi Arabia or alternative Yemeni ports could delay aid convoys as they get held up at military checkpoints.

“Arranging for commercial imports to go through Jizan and then importing it overland in Saudi Arabia is not going to solve the problem of extreme food insecurity among more than half of the population,” argued Paul.

To help unblock the situation, Sen. Todd Young, R-Ind., introduced an amendment in July to the annual defense authorization bill that would have barred US weapons sales to Saudi Arabia until the secretary of state certifies that Riyadh is allowing the delivery and installation of World Food Program cranes in Hodeidah. Senate leadership, however, did not bring up the amendment when the bill came up for a floor vote on Monday.

“The Saudi-led coalition has unnecessarily delayed desperately needed humanitarian shipments to Yemen and refused to permit the delivery of much-needed US-funded cranes to the port of Hodeidah,” Young told Al-Monitor. “Delivery of the cranes would facilitate quicker delivery of food and medicine needed to save lives in immediate danger.”

In addition to Hodeidah’s five out-of-commission cranes, Paul also pointed to a “de facto blockade” he argues the Saudis have imposed on Yemen.

“Essentially, the coalition is using naval assets to stop and delay most imports coming into the country,” said Paul.

According to Paul, the blockade, combined with the coalition’s threats to attack Hodeidah, has caused insurance rates to surge, making it harder to maintain credit for imports and thereby causing a spike in the cost of food and consumer goods.

Saudi Arabia maintains that the blockade is necessary because Iran is smuggling arms to the Houthis, including missiles used to attack Saudi territory. A UN report released in 2016 noted that anti-tank guided missiles intercepted during transfer off the coast of Oman were made in Iran. And just Monday, The New York Times reported that US Vice Adm. Kevin Donegan, the commander of the Bahrain-based Fifth Fleet, said that Iran is continually providing the Houthis with missiles, sea mines and explosive boats.

Paul, however, said that he has yet to see a credible report of Iran using aid shipments to smuggle weapons to the Houthis.

“One thing that’s hardest for me to wrap my mind around, and I think least credible, is the idea that Iranian weapons are coming in commercial grain shipments or on container ships,” he said. “That’s just not how it’s going to get done.”