The Saudis announced they will lift a blockade on a key Yemen port after growing pressure from the Trump administration. 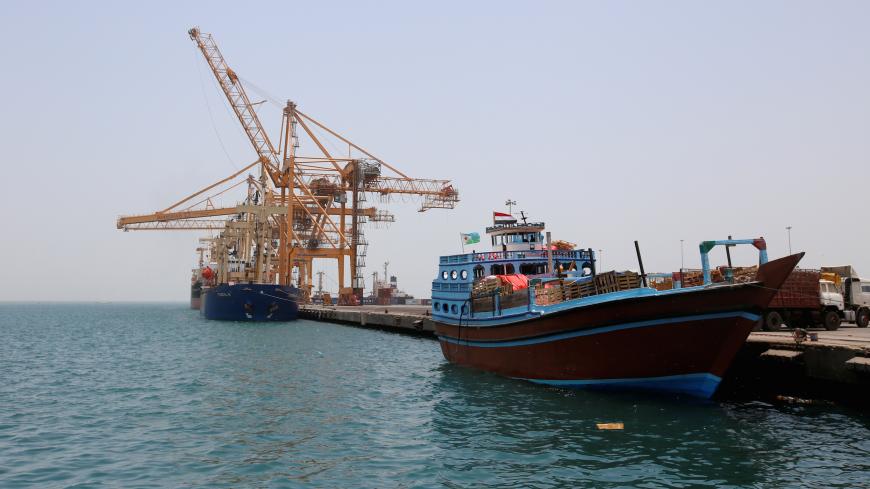 WASHINGTON — The White House today welcomed the announcement by Saudi Arabia that the kingdom would lift a blockade on a key Yemen port; the decision followed mounting pressure from the US administration over the past month.

Even as it condemned a second Houthi ballistic missile launch that attempted to target the Saudi capital, Riyadh, on Tuesday, the Donald Trump administration has been stepping up pressure on the Saudi-led coalition to lift its blockade to allow critically needed food and fuel into Yemen to alleviate one of the biggest humanitarian calamities in the world.

“We have engaged closely with Saudi leadership to encourage them to take steps to improve humanitarian conditions and improve their defenses. Saudi Arabia’s announcement today that the coalition is opening the port of Hodeidah is one of the steps we had encouraged, as were previous coalition actions like permitting aid ships to unload and flights to land in Yemen,” a National Security Council (NSC) spokesperson told Al-Monitor today.

“It is important to note the Saudi response to yesterday’s attack — which appears to have targeted Saudi leadership during a Cabinet meeting — was to follow through with opening Hodeidah,” the NSC official said. “We expect the Saudis to turn to the UN Security Council for assistance in holding Iran accountable for its clear violations. … These are exactly the productive steps we are encouraging by the Saudis.”

In a series of high-level public statements and private consultations, the Trump administration is signaling to its Gulf ally that it considers the 2½-year-old military campaign broadly a failure and that it is time to move toward a cease-fire and talks for a political solution.

“A political solution is the only way to advance long-term stability in Yemen and end the suffering of the Yemeni people,” State Department spokesperson Heather Nauert said in a statement Tuesday condemning the Houthi missile attack on Riyadh. “We urge all parties to immediately cease hostilities, avoid retaliatory measures and return to political negotiations under the auspices of the United Nations.”

Three-quarters of Yemen’s population — some 22 million people — “need humanitarian assistance to survive,” a coalition of humanitarian aid groups said in a letter this week marking 1,000 days since the Saudi-led coalition began conducting a campaign of punishing airstrikes in Yemen that is estimated to have killed over 5,000 civilians. The airstrikes and violence targeting civilians have escalated this month, the United Nations and Yemen experts said.

“We are now seeing an escalation,” Iona Craig, spokesperson for the Yemen data project and a journalist who has covered Yemen for seven years, told Al-Monitor on Tuesday. In the last month, according to the project’s data, there have been a larger number of airstrikes that have hit nonmilitary targets, she said. “It’s a worrying change; whether it is a temporary one or not, I don’t know.”

More than two years into the Saudi-led campaign, there is no sign that the US-supported military intervention has managed to advance its aims of dislodging the Houthi rebels from their 2014 seizure of the Yemeni capital of Sanaa and restoring the government of Yemeni President Abed Rabbo Mansour Hadi to power. There also has been no reduction in the threat to the Saudi homeland posed by Houthi missiles, as Tuesday's and the Nov. 4 Houthi ballistic missile strikes aimed at Riyadh starkly demonstrate. A spokesman for the Saudi-led coalition said that it had intercepted Tuesday's missile.

The Trump administration harshly condemned the attempted Houthi missile attacks on Riyadh, and has alleged that the longer-range missile fired at Riyadh in November was likely produced by Iran, which is prohibited by UN Security Council Resolution 2231 from receiving or transferring ballistic missile technology. The Iranians have angrily rejected the charge.

But even as Washington has accused Iran of supplying weapons and missile technology to the Houthis, it has increasingly made public its impatience with the Saudi-led campaign in Yemen as it has pressed the Saudis to lift their blockade. The White House and State Department have issued four increasingly pointed statements this month alone calling on the Saudis to immediately allow desperately needed food and fuel into Yemen, most notably in a statement from Trump himself.

“I have directed officials in my administration to call the leadership of the Kingdom of Saudi Arabia to request that they completely allow food, fuel, water and medicine to reach the Yemeni people who desperately need it,” Trump said in a statement from the White House on Dec. 6. “This must be done for humanitarian reasons immediately.”

That was followed up by a more lengthy statement from the White House on Dec. 8 expressing grave concern about escalating violence and the humanitarian situation in Yemen and urging a cease-fire and renewed talks.

Trump and British Prime Minister Theresa May, another close Saudi ally, also discussed the urgency of the Saudis' lifting their blockade in a phone call Dec. 19. In the call, May and Trump “agreed on the vital importance of reopening humanitarian and commercial access to prevent famine and alleviate the suffering of innocent Yemenis,” a spokesman for Downing Street said in a readout of the call.

The uptick in US pressure on the Saudis to lift the blockade may be a result of Trump administration alarm at Saudi actions in the aftermath of the Nov. 4 Houthi missile strike targeting Riyadh’s airport, former US Ambassador to Yemen Gerald Feierstein said.

“What seems to have triggered it all is … that kind of harsh response in November to the first missile strike,” Feierstein, now with the Middle East Institute, told Al-Monitor today. “I think that really kind of got people’s backs up a little bit. It looked like collective punishment.”

“After the first missile strike on Riyadh, Saudi Arabia imposed a broad embargo on humanitarian goods, which arguably kind of crosses the line into something illegal,” Feierstein said. “It is after that, that the administration started pushing harder on the Saudis to back off.”

On Friday, Deputy Secretary of State John Sullivan and US Agency for International Development (USAID) administrator Mark Green met with a group of US and international humanitarian groups and nongovernmental organizations in Sullivan’s seventh-floor suite to discuss the Yemen situation.

“I was really impressed by just the level of the presence there on the US government side,” an NGO officer who attended the meeting and who spoke not for attribution told Al-Monitor. “From my point of view, they were as tough as they can possibly be within the framework of a reasonably cozy relationship” with the Saudis, the officer added.

According to the NGO attendee, Green told the group that the United States would not be reacting to Saudi statements about lifting the blockade, but was “waiting to see actions.”

Humanitarian groups believe the United States could do more to help re-energize the UN political process to try to find a political resolution to the Yemen war. The Houthis have said they no longer want to negotiate with UN Yemen envoy Ismail Ould Cheikh Ahmed, whose contract ends in February. There is talk of possibly resuming the UN Yemen political talks process, possibly with a new envoy, early next year, aid officials who work on Yemen said.

“The US has the leverage and influence,” Scott Paul, the humanitarian policy lead for Oxfam America, told Al-Monitor. It could use it to try to advance “momentum in the UN process.”

Feierstein said US officials had also been concerned that the Saudis were mulling possibly escalating their military campaign in Yemen, in the wake of the Houthi missile strikes targeting Riyadh as well as the Houthis’ killing of former Yemen President Ali Abdullah Saleh on Dec. 4 after he switched sides to oppose them.

“There may be [US] nervousness that, following the events beginning in December, including the death of Saleh, … that there is going to be some kind of push for a military solution to this,” Feierstein said. “There could be a [Saudi] inclination to step up the air campaign or a push on the ground.”

From the perspective of the US government, a military escalation won’t succeed, Feierstein said.

“It all adds up to less than anything that you would think is fundamentally changing the stalemate in the fighting,” he said.

The NSC official contrasted the Saudi decision to lift the blockade on the port even after the Dec. 19 Houthi missile strike on Riyadh with Iranian behavior.

“The IRGC … continues to supply the Houthis with the weapons and wherewithal to continue these reckless and dangerous attacks that could spark a broader regional conflict,” the NSC official said, referring to Iran's Islamic Revolutionary Guard Corps.

“We will work closely with the Saudi-led coalition, international NGOs, the United Nations and our partner countries to follow through on the coalition’s announcement earlier today on Hodeidah and ensure it is implemented in a way that improves conditions on the ground and alleviates suffering,” the NSC official said. “At the same time, we hope the Houthis will stop harassing aid workers and shipments of humanitarian supplies and diverting assistance to fill their own coffers.”

“We have encouraged the Saudis and our other regional partners to re-energize political negotiations, which, as we have said repeatedly, are the only way to resolve the conflict,” the NSC official said. “Those negotiations will take time, but we must remain focused to ensure we are making progress and preventing spoilers like Houthi hard-liners from derailing political negotiations by launching ballistic missiles at civilian facilities in Saudi Arabia, as they did yet again on Dec. 19.”