The US secretaries of state and defense threw their support behind the United Nations Yemen envoy’s calls for a cessation of hostilities and for Yemen peace talks to be held in Sweden in November. 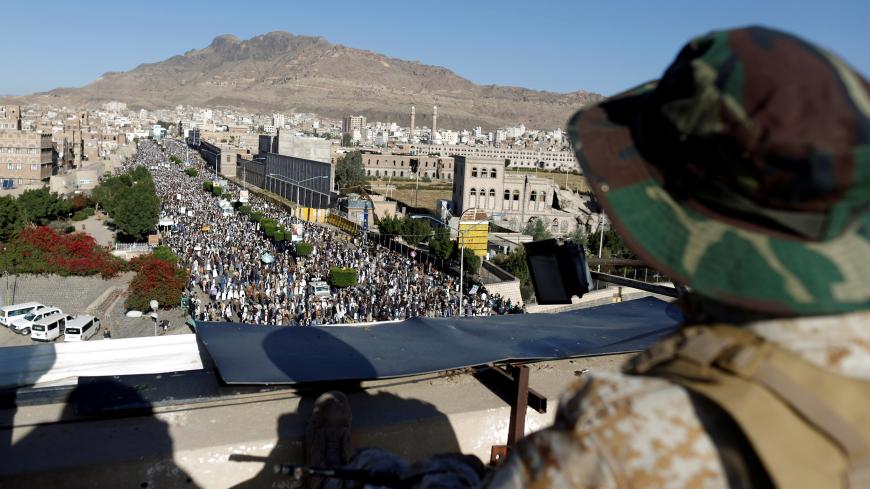 A Houthi militant sits guard on the roof of a building overlooking a rally in Sanaa, Yemen, Oct. 5, 2018. - REUTERS/Khaled Abdullah

WASHINGTON — Amid growing fears of famine and congressional misgivings about US support for the Saudi-led air war in Yemen, US Secretary of State Mike Pompeo and Secretary of Defense Jim Mattis threw their support behind UN Yemen envoy Martin Griffiths’ peace efforts, calling for all parties to the conflict to observe a cessation of hostilities and agree to attend peace talks next month, likely in Sweden.

“The time is now for the cessation of hostilities, including missile and UAV strikes from Houthi-controlled areas into the Kingdom of Saudi Arabia and the United Arab Emirates,” Pompeo said in a statement Tuesday. He said that subsequently, coalition airstrikes “must cease in all populated areas in Yemen.”

While a State Department official said the United States wants to see Houthi missile strikes into Saudi Arabia end first, he did not say that was a condition for calling on the Saudi-led military coalition to end their airstrikes into populated areas of Yemen.

“As far as specific conditions, that’s something the special envoy has to answer,” Palladino said. “We are urging all sides consistently to end the conflict in this dire humanitarian situation.”

"We have got to move toward a peace effort here, and we can't say we are going to do it sometime in the future," Mattis said at the US Institute of Peace on Tuesday. “We need to be doing this in the next 30 days."

Griffiths, who met with Mattis, Deputy Secretary of State John Sullivan and National Security Council officials during consultations in Washington last week, said today that he welcomed the show of support from Washington.

“I urge all concerned parties to seize this opportunity to engage constructively with our current efforts to swiftly resume political consultations to agree on a framework for political negotiations, and confidence-building measures, in particular enhancing the capacities of the Central Bank of Yemen, the exchange of prisoners and the re-opening of Sana’a airport,” Griffiths said in a statement today. “We remain committed to bring the Yemeni parties to the negotiations table within a month. Dialogue remains the only path to reach an inclusive agreement.”

Griffiths also told the BBC today that while a total countrywide cease-fire may not be immediately feasible, de-escalation efforts in that direction were very welcome.

He called for three main steps: a freeze of military activities at the key Red Sea port of Hodeidah — the key logistics hub for importing food and fuel to the capital, Sanaa; the suspension of long-range drone and missile attacks by the Houthis into Saudi Arabia; and a suspension of Saudi airstrikes on the civilian populations in Yemen.

The UN envoy has continued to make progress in laying the groundwork for a Yemen political reconciliation process, Palladino said. Based on meetings with him last week, “We believe the climate is right for both sides to come to the table.”

The United States hopes that a cessation of violence and vigorous talks will help alleviate the humanitarian crisis, Palladino said.

“I think this is the certainly the strongest statement [on Yemen] the US has put out during the Trump administration,” Gregory Johnsen, a former member of the UN panel of experts on Yemen, told Al-Monitor today. “What is quite obviously the coordinated statements of the secretary of defense and secretary of state [using] the most forceful language the US has used in the last couple years.”

“This is going to be interesting, whether the US has the leverage it thinks it has,” Johnsen said. “Is it able to convince the Saudi and UAE allies that negotiating now is in their best interests?”

In a sign that the Saudis and Emiratis may not be enthusiastic about Washington’s cease-fire calls, unnamed pro Saudi-led military coalition sources told Reuters and The National that they had amassed thousands of troops to move on — or at least put pressure on — the Houthi rebels in Hodeidah.

The renewed US administration efforts to try to de-escalate the Yemen war may also reflect growing congressional misgivings about the US role in the conflict, particularly in the wake of the Saudi killing of journalist Jamal Khashoggi, widely believed to have been authorized by Saudi Crown Prince Mohammed bin Salman.

“It’s past time for the United States to use our leverage to help end this horrific war,” Sen. Jeanne Shaheen, D-N.H., said today, adding that she was encouraged by the Trump administration call for a cease-fire.