Intel: Why experts are pessimistic about Yemen peace deal 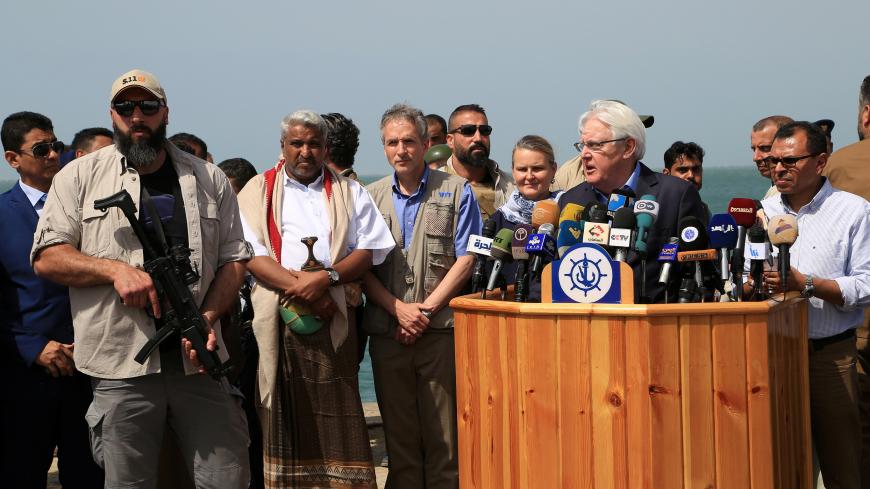 UN envoy to Yemen Martin Griffiths speaks to the media during a visit to the Red Sea port of Hodeidah, Yemen, Nov. 23, 2018.

UN Yemen envoy Martin Griffiths arrived in Sanaa today, a major step toward reopening talks to end the war before the end of the year.

Why it matters: Griffiths’ arrival in Yemen’s rebel-held capital is a sign that negotiators have made some progress on the “confidence-building measures” for a peace deal that the UN called for at the General Assembly meeting in September. They include getting Yemeni President Abed Rabbo Mansour Hadi to pay the salaries of civil servants in Houthi-controlled areas, giving the UN control of the vital port of Hodeidah and exchanging prisoners between the warring groups.

Confidence building: The British diplomat expects to hold talks with the Houthis today, a UN source told the AFP wire service. Meanwhile, 50 wounded rebels will be evacuated from Sanaa, according to the Saudi-led coalition fighting in Yemen, one of the major precursors to talks.

Griffiths is also pushing to reopen Sanaa’s airport, a potential step toward preventing a mounting famine that has accelerated amid an uptick in violence in Hodeidah. In August, a UN-backed panel of experts described the “severe naval and air restrictions” imposed by the Saudi-led coalition, including the “effective closure” of the airport, as amounting to potential war crimes.

Pyrrhic victory? Griffiths might not eke out a deal to end the war, but his mere presence in Sanaa is a big deal. Houthi rebels forced the last two UN envoys out of the country, even hitting the convoy of Griffiths’ predecessor, Ismail Ould Cheikh Ahmed, with a barrage of gunfire.

Big questions: Will the Houthis actually show up to the peace talks this time? The Iran-backed rebel group, which practices a unique brand of Shiite Islam, couldn’t get off the runway to head to Geneva in September amid divisions in their movement and accusations that the Saudi-led coalition in Yemen wouldn’t give them safe passage. And will the Saudis — facing pressure from the US Congress if not from the Donald Trump administration — be willing to come to the table as they try to fend off missile attacks on their cities?

Even if the peace deal succeeds, experts aren’t convinced it will last. “Yemen has a Humpty Dumpty problem,” Gregory D. Johnsen, a former member of the UN panel of experts on Yemen, told the Associated Press. “It’s broken and I don’t think anybody, no matter how much money they pour into the country, will be able to put it back together again — and certainly not anytime soon.”

What’s next: First, the international community is waiting to see how Griffiths’ talks with the Houthis go today. The UN is still trying to get Saudi Arabia, the United Arab Emirates, the Houthis and Yemen’s exiled government to the table before the end of the month.

On the US side, Christopher Henzel, Trump’s nominee to be the next ambassador to Hadi’s government, will get a hearing in front of the Senate Foreign Relations Committee Tuesday afternoon.

Know more: Jack Detsch explains how the Trump administration is trying to put pressure on Iran by calling out arms transfers to the Houthis.