With UN talks on Yemen delayed amid escalating fighting, veteran diplomats say Pompeo should work with the UK to revive the Friends of Yemen and give UN efforts to end the conflict more sustained, high-level attention. 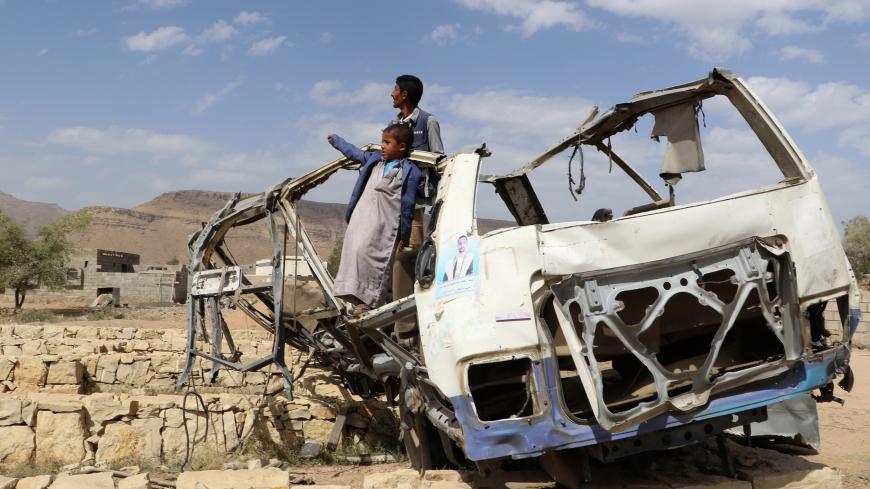 Abdullah al-Khawlani stands with his son, Hafidh, who survived a Saudi-led airstrike, on the wreckage of a bus destroyed by the strike in Saada, Yemen, Sept. 4, 2018. Another son of Khawlani was killed by the strike. - REUTERS/Naif Rahma

WASHINGTON — The United Nations said today that it would push back plans for Yemen peace talks this month amid an escalation by Saudi- and Emirati-backed fighters toward the vital Red Sea port of Hodeidah, in what appeared to be a setback for recent US and UN calls on the Yemen parties to de-escalate fighting. But US officials said they were not overly concerned about the possible delay.

UN Yemen envoy Martin Griffiths will now seek to get the warring parties to political talks in a third country by the end of the year, a UN spokesman said.

“There’s always different challenges to bringing the parties together,” UN spokesman Farhan Haq told reporters at the UN today. “What we’re trying to do is clear up any issues so that we can get a successful round of talks as soon as possible.”

US officials said they have confidence in UN envoy Griffiths’ efforts, and were not concerned if he thought he needed a slight delay to better prepare for productive consultations.

“Martin has made great progress and we continue to support his efforts,” a US official, speaking not for attribution, told Al-Monitor. “We reiterate our call for the parties to come to the negotiating table as soon as possible to resolve the conflict.”

Asked about an escalating offensive by Saudi- and Emirati-backed fighters toward Hodeidah, just a week after the United States called for a cease-fire and peace talks, the State Department said its message was clear.

“We’ve been clear with Saudi, Emirati and Yemeni officials at every level that the destruction of critical infrastructure or destruction of the delivery of vital … aid and commercial goods is unacceptable, and we are in close contact with our partners,” Palladino said.

“We continue to call for a cessation of hostilities … and vigorous resumption of a political track,” Palladino said. “That is the way forward. That’s how we are going to ease this humanitarian crisis.”

The recent statements by US Secretary of State Mike Pompeo and Secretary of Defense Jim Mattis expressing support for Griffiths’ Yemen peace efforts are good, but senior US government officials, in particular Pompeo, need to give Yemen more sustained, high-level attention, for the UN efforts to succeed, former US Ambassador to Yemen Gerald Feierstein said.

“When John Kerry was still there, he made it one of his priorities, and he spent a fair amount of time trying personally to advance negotiations,” Feierstein, now with the Middle East Institute, told Al-Monitor. “My view has always been that Pompeo needs to do the same thing.”

Feierstein proposed that Pompeo work with British Foreign Secretary Jeremy Hunt to revive the Friends of Yemen group to give strong international backing to Griffiths’ peace efforts, and which can also offer inducements to the parties in the talks.

“What you want to do is provide strong, international support for what Martin Griffiths is doing,” Feierstein said. “You want to empower Griffiths.”

The British have generally taken the lead in international efforts on Yemen, including at the UN Security Council and through the Friends of Yemen. But when Pompeo and Mattis issued statements last week calling for a Yemen cease-fire and throwing their support to Griffiths, it did not seem that Britain had been consulted, though British officials soon after echoed support for the cease-fire calls.

The apparent lack of consultation could be a sign that the US statements were made primarily because of US domestic political pressure in the wake of the Saudi killing of journalist Jamal Khashoggi, not a substantive shift in US policy on Yemen, Feierstein said.

The Yemen conflict is exceedingly complicated and the international community is not in a position to address all of its drivers, some of them long-standing, at once, Feierstein said at a conference hosted by the Middle East Institute today.

What is needed is to address it in phases, and to move to address the most immediate conflict, the war between the Saudi-backed Yemeni government and the Houthis, first, he said.

“A special envoy for Yemen would give the war the attention it needs,” Bruce Riedel, a veteran National Security Council and CIA official and contributor to Al-Monitor’s Gulf Pulse, told Al-Monitor. “It could also open the door for an American dialogue with the Houthis, which is needed.”

“Of course, we should also send an ambassador to Riyadh,” Riedel added.

The White House announced Wednesday that President Donald Trump intends to nominate outgoing US Ambassador to Yemen Matthew Tueller to be the next US ambassador to Iraq, as Al-Monitor first reported in July. It announced last month the nomination of diplomat Christopher Henzel, currently the deputy chief of mission at the US Embassy in Riyadh, Saudi Arabia, to be the next US envoy to Yemen.

US officials remain in daily contact with Griffiths’ office. Deputy Assistant Secretary of State for Arabian Gulf Affairs Tim Lenderking plays an active role in US Yemen issues, and Deputy Secretary of State John Sullivan hosts a monthly meeting with nongovernmental organizations and humanitarian agencies concerned about the devastating humanitarian crisis in Yemen.

The UN and aid groups warn that some 14 million people in Yemen — half the population — are at risk of famine, after over three years of war and salaries not getting paid have drained household coffers. More recently, the plunge in value of the Yemeni currency, the rial, and a spike in food and fuel prices have further reduced people’s purchasing power. Sustained malnutrition and lack of access to medical care has also made people in Yemen more vulnerable to diseases, such as cholera.

“People are not able to recover” between spikes in the fighting in Yemen, Oxfam America’s Scott Paul, recently back from Yemen, told a meeting of humanitarian groups and journalists on Wednesday.

In the Yemen conflict and accompanying economic collapse, “there are recurring shocks … but in between … there is no recovery,” Paul said. “People are not rebuilding their assets, to improve their income or nutrition. So people are just getting sicker and more malnourished and more vulnerable.”

Since the Saudi-led intervention in Yemen in 2015, “everything is worse,” Jeffrey Feltman, former UN undersecretary of political affairs and top US Middle East diplomat, said at a conference hosted by the Middle East Institute today.

“At some point when you are in a hole, stop digging,” Feltman said. “This war needs to stop.”