Amid famine, anger at Khashoggi murder, will Saudis be pressed to end Yemen war?

UN warnings of unprecedented famine in Yemen, combined with US disgust at Saudi Arabia’s killing of journalist Jamal Khashoggi, could spur Congress to pressure the Donald Trump administration to force an end to the Saudi-led war. 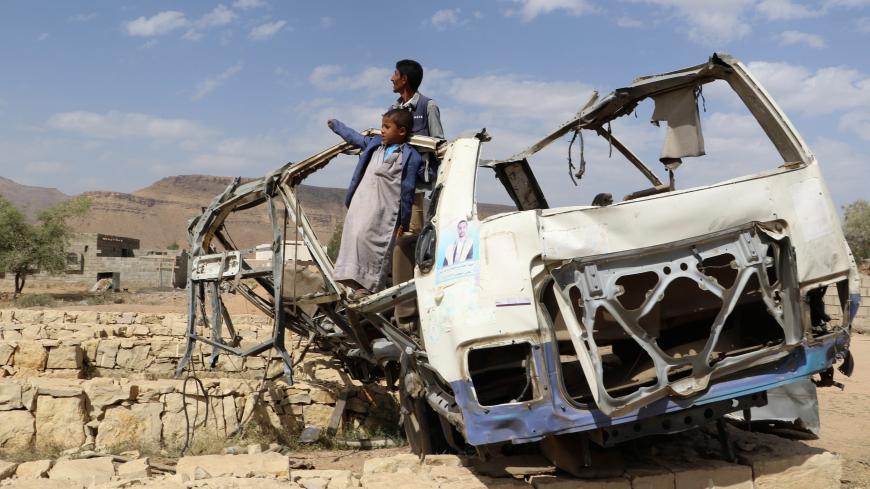 Abdullah al-Khawlani and his son, Hafidh, who survived a Saudi-led airstrike, stand on the wreckage of a bus destroyed by the strike in Saada, Yemen, Sept. 4, 2018. Another son of Khawlani was killed by the strike. - REUTERS/Naif Rahma

WASHINGTON — A convergence of factors, including the murder of journalist Jamal Khashoggi and growing fears of massive famine in Yemen, could drive Congress to press the Donald Trump administration to force the Saudis to end their war in Yemen, former US officials who work on the region said this week.

“Now is the time for Congress to take the big step and compel an end to this war,” Bruce Riedel, a former CIA and National Security Council official and columnist for Al-Monitor’s Gulf Pulse, said at a Brookings Institution forum today.

While Saudi Crown Prince Mohammed bin Salman has linked his prestige with the war in Yemen he championed as a new Saudi defense minister in 2015, his reputation has been badly damaged in Washington because of his widely presumed role in authorizing the plot that the Saudis now admit killed Khashoggi at the Saudi Consulate in Istanbul Oct. 2.

“There is an opportunity in all this for us,” Riedel said. “Refocus attention on Yemen and on quitting the war as quickly as possible.”

The proposal came as the United Nations’ top humanitarian officer issued an unusually dire warning about the scale of potential famine emerging in Yemen, declaring some 14 million people — half the Yemeni population — now entirely dependent on aid for their survival. The revised UN assessment since just September comes as food and fuel prices have risen there in the last four months of intensified fighting around the key Red Sea port of Hodeidah, and people’s purchasing power has become exhausted after three and a half years of conflict.

“There is now a clear and present danger of an imminent and great big famine engulfing Yemen: much bigger than anything any professional in this field has seen during their working lives,” Mark Lowcock, the UN undersecretary general for humanitarian affairs, said in a stark briefing to the UN Security Council Oct. 23.

“Our revised assessment … is that the total number of people facing pre-famine conditions, meaning they are entirely reliant on external aid for survival, could soon reach … 14 million,” Lowcock said. “That is half the total population of the country.”

The UN humanitarian chief warned that with another 500,000 people displaced since fighting intensified around Hodeidah four months ago, and damage to the port facilities, aid agencies simply will not be able to provide the scale of relief needed to feed the 14 million people dependent on it.

“In the absence of a cessation of hostilities, especially around Hodeidah, where fighting for more than four months now has damaged the key facilities and infrastructure on which the aid operation relies, the relief effort will ultimately be simply overwhelmed,” Lowcock said. “The time, surely, has come for all the parties to heed these warnings.”

“With so many lives at stake, we call upon the belligerents to seize this moment to engage fully and openly with the special envoy to end the conflict,” Lowcock pleaded.

“The deputy secretary and the special envoy discussed the dire humanitarian situation and latest steps being taken to alleviate the suffering of the Yemeni people, as well as the urgent need for de-escalation and dialogue throughout Yemen,” State Depatment spokeswoman Heather Nauert said in a statement. “Deputy Secretary Sullivan reiterated US support for special envoy Griffiths as he continues his consultations. The deputy secretary and the special envoy expressed hope that all sides can work toward a comprehensive political agreement that brings peace, prosperity and security to Yemen.”

The sharp rise in the scale of famine in Yemen has grown in recent weeks for multiple reasons, including rising food and fuel prices, and fighting in the province where the port of Hodeidah is located, said Dafna Rand, a former State Department official, now with Mercy Corps.

“There is food available, but people have no money to buy food,” Rand said at the Brookings Institution forum today. “There is food, but no one can afford it.”

She said there has been a 25% increase in basic food prices in Yemen just since January. Then, since July, a UAE-backed offensive to try to push the Houthi rebels from the port of Hodeidah has spread fighting across the province, impeding road access between the port city and the rest of northern Yemen, including the capital city of Sanaa. And the number of internally displaced people in the province has increased by half a million. Meantime, Sanaa airport has been closed by the Saudi-led coalition, further reducing the capacity of aid groups.

“There has been a decrease in humanitarian capacity,” Rand said. “The solution is access.”

The United States needs to “find a way to bring the regional conflict to a halt, [but] recognize that [Yemen’s] internal conflict is not likely to end,” Riedel said.

Riedel noted that in one of his final columns for the Washington Post, Khashoggi last month proposed that the Saudi-led military coalition declare a unilateral cease-fire in Yemen, lift the blockade and convene a peace conference of all the Yemeni parties to try to come up with a new solution.

“Peace talks will provide Saudi Arabia with a golden opportunity. Riyadh will almost certainly find international support if it enters into a cease-fire as negotiations take place,” Khashoggi wrote in the Washington Post Sept. 11, 2018. “Obviously, Riyadh will not get all of what it wants and would leave Yemenis to sort out their differences with their fellow Houthis in a National Congress — instead of on bloody battlefields.”