Has the United States lifted its “red light” on an Emirati- and Saudi-backed military operation to take the key Yemeni port? 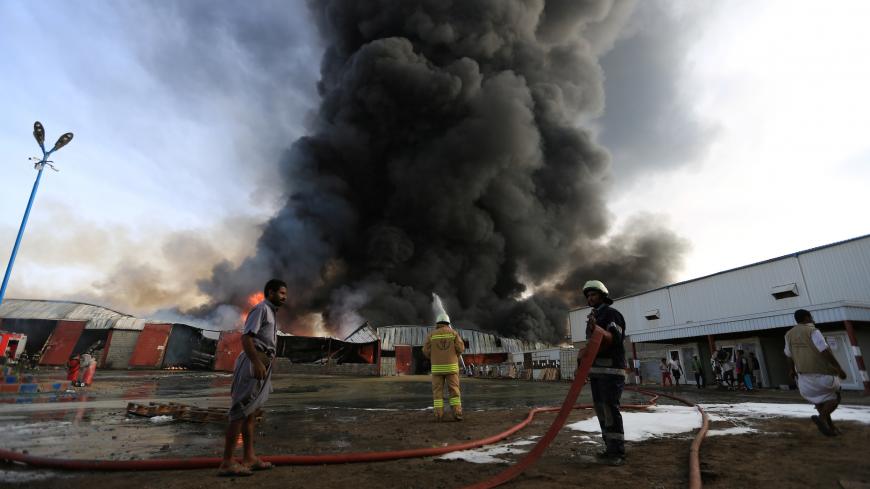 Firefighters try to extinguish a fire engulfing the warehouse of the World Food Program in Hodeidah, Yemen, March 31, 2018. - REUTERS/Abduljabbar Zeyad

WASHINGTON — With Saudi- and Emirati-backed Yemeni forces reported to have advanced to within 20 miles of the key Yemeni Red Sea port of Hodeidah, some have wondered if the Donald Trump administration has softened its previous opposition to a coalition military effort to seize the Houthi rebel-held port, which is a critical humanitarian lifeline for the Yemeni capital of Sanaa.

The White House said it had not changed its position.

“The United States has been clear and consistent that we will not support actions that destroy key infrastructure or that are likely to exacerbate the dire humanitarian situation that has expanded in this stalemated conflict,” a National Security Council (NSC) spokesperson, speaking not for attribution, told Al-Monitor by email June 1.

“We expect all parties to abide by the Law of Armed Conflict and avoid targeting civilians or commercial infrastructure,” the NSC spokesperson said.

United Nations aid agencies warned again June 1 that a military operation to take Hodeidah, a port city of 400,000 people and the key lifeline for food and fuel for the capital’s population of 2 million people, must be avoided.

“We cannot have war in Hodeidah,” Jan Egeland, the head of the Norwegian Refugee Council, told Reuters in Geneva June 1.

“The coalition ground forces are now at the doorstep of this heavily fortified, heavily mined port city,” Egeland said. “Thousands of civilians are fleeing from the outskirts of Hodeidah, which is now a battle zone.”

“We are now in a race against the clock, to really get enough supplies in through Hodeidah, which is very difficult given the continued severe restrictions on fuel and other imports by the coalition,” Egeland said. “War would mean nothing coming through.”

Al-Monitor has learned that when Secretary of State Mike Pompeo met UAE Foreign Minister Sheikh Abdullah bin Zayed Al Nahyan at the State Department on May 14, he conveyed US opposition to a military operation to take the port, and the UAE envoy said it would not go ahead without US agreement.

A State Department spokesperson did not respond to a query from Al-Monitor June 1 on the alleged exchange.

Former US Ambassador to Yemen Gerald Feierstein said it is not clear what the coalition’s intentions are as the Yemeni forces it backs on the ground advance up the coast toward the port.

“Last I saw they are within 20 miles of the port,” Feierstein, now with the Middle East Institute, told Al-Monitor May 31. “And there is not much indication up until now that the Houthis are actively resisting the move up the coast.”

“I think the Houthis say they are going to fight in the city, so it could turn into a very messy thing if they follow through and try to make the coalition fight an urban battle,” Feierstein said.

Soon after the Trump administration came into office, Secretary of Defense Jim Mattis told the Emiratis that their plan for taking Hodeidah was not workable and they needed to hold off, which they did, Feierstein said.

“Now, of course, they have been engaged in this kind of steady movement up the coast for some months now,” Feierstein said. “They are taking a different tack. I don’t know if the US has been specifically consulted on this issue one way or the other. That may be more to the point.”

“I doubt we are giving a green light, but we may not be doing very much to object, and therefore the Emiratis in particular [could be] taking that as a sign that they have got a free hand,” he said.

The advance of Yemeni forces on the ground toward Hodeidah could be intended to pressure the Houthis to return to UN-backed peace negotiations, former US Ambassador to Yemen Stephen Seche said.

“They do want to do something to push the Houthis to return to [negotiations],” Seche, now with the Arab Gulf States Institute in Washington, told Al-Monitor. “I think part of [the strategy is] to convince the Houthis they can’t win, they could lose this prize, Hodeidah, and some of their best fighters. … But it is a flip of a coin, if [the Houthis] can see the writing on the wall, they will lose some territory.”

The risk is that, with its military successes on the ground, “the coalition might decide we don’t want to negotiate now,” Seche said.

“It is hard to know what is actually going to happen,” Gregory Johnsen, a former member of the UN panel of experts on Yemen, told Al-Monitor.

“There has been quicker movement up the coast to Hodeidah than most thought possible,” Johnsen, now with the Arabia Foundation, said. “What happens next is still sort of an open question. Both sides are eyeing each other, then react to the other’s next move.”

New UN special envoy for Yemen, Martin Griffiths, warned the UN Security Council that a military operation to take Hodeidah “would, in a single stroke, take peace off the table.”

Griffiths is racing “to persuade the principal parties to the conflict to enter talks before something goes horribly wrong and they all double down on a war no one can win,” Seche wrote for the Arab Gulf State Institute’s website this week.