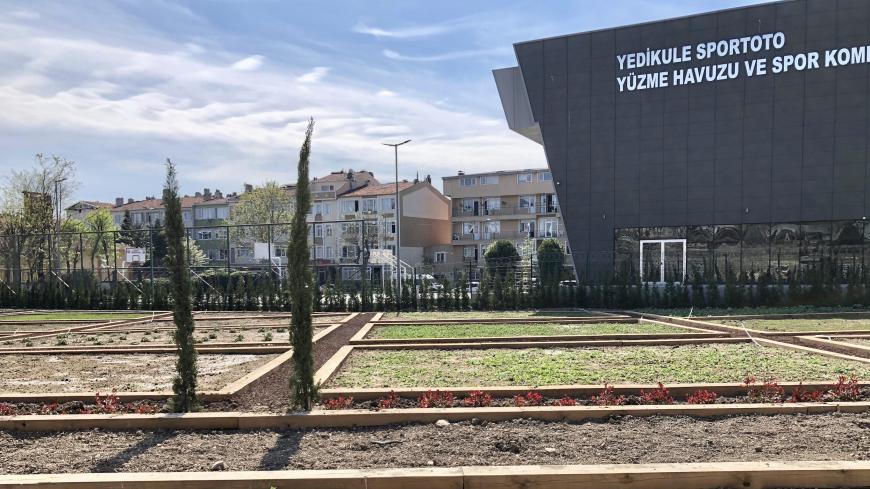 Photo of the recently-destroyed bostan in Yedikule, April 29, 2020. - Paul Osterlund

In late April, the news broke that one of Istanbul's historic urban gardens, or bostans, was demolished by the Fatih Municipality under Turkey's ruling Justice and Development Party (AKP).

The bostan in the old city quarter of Yedikule was in fact destroyed over a month ago, while the novel coronavirus outbreak dominated the news following the March 11 announcement of Turkey’s first diagnosed case.

The loss of the garden, which dates back to at least the 18th century, is an indicator that Istanbul's cultural heritage, already under constant threat from development and disastrous restoration projects, faces even greater risks as the pandemic occupies the attention of the city, the hotbed of the coronavirus in Turkey.

“It is the destruction of a heritage site from the Ottoman era by a municipality under the control of the AKP, replacing living cultural heritage from the Ottoman period with recreational garden plots only to appease developers who receive lucrative contracts,” said Aleksandar Shopov, an incoming assistant professor of early modern Ottoman history at Binghamton University who has extensively researched the bostans.

In a March 21 Facebook post, the scholar showed before-and-after pictures of the bostan, including its historic well that still remains.

“The coronavirus is used as an opportunity to accelerate development and the destruction of the bostans. This bostan in particular produced over 10 vegetable varieties, as well as mulberries, pomegranates, plums and figs,” Shopov told Al-Monitor.

During Ottoman times, the gardens were tended by migrants from Albania and Macedonia, while today most if not all of the gardeners hail from the Black Sea province of Kastamonu and have raised produce in the bostans for decades.

The bostans, which are situated on the outer and inner sides of Istanbul's 5th-century city walls, have been a site of conflict for years. In 2013, municipality bulldozers entered two gardens just behind the walls and covered them with rubble in preparation for a project that was never started.

The land remains an empty, sad reminder of what was an integral part of the city's food production for centuries. In the ensuing years, the long stretch of bostans on the outer section of the wall has remained under threat. In 2016, the municipality tore down storage sheds in the gardens, sparking fears that the bostans themselves would follow.

That the old city walls and the nearby bostans are protected UNESCO cultural heritage sites has not stopped the municipality from trying to develop the area. In 2013, when the two inner-wall gardens were destroyed, the bulldozers left scars on the ancient walls themselves that can still be seen, according to Shopov. The recently destroyed bostan, however, is not in a protected area.

“The bostan is treated like a plot of land without history,” Shopov said, adding that there are now only two of these gardens remaining inside the walls.

According to a April 27 report by Cumhuriyet, Abdullah Inanc Kiran from the Yedikule Bostans Solidarity group filed an inquiry with the presidency's communications directorate in March regarding the state of the bostan. He was informed April 14 that the Faith Municipality had control of the land and was renting it out as a “hobby garden” open to the public.

“Given that the municipality opened it to the public, they should have protected it as a bostan for the schools to use. A hobby garden is not the same thing as a bostan — a bostan has a tangible heritage,” Kiran told Cumhuriyet.

A visit to the area on April 29 found the land had been bulldozed and a section had been replaced with wooden planters where flowers were growing. A short wall of concrete bricks had been installed at one end.

The nearby old city walls, a segment of which collapsed early this month, have been neglected for years, arguably a consequence of the AKP's valorization of the Ottoman empire and scorn for the city's Byzantine past. Ironically, the bostans were vital to the city's produce production in the mid-Ottoman era. Many were located on the grounds of mosques, and the vegetables grown in the bostans were sold to fund the mosques' upkeep.

Shopov's research was instrumental in saving one bostan, located next to the 16th-century Piyale Pasa mosque, from being turned into a parking garage. In 2015, a report he co-authored was used to successfully appeal to the Istanbul cultural protection board to have the garden designated as protected cultural heritage site.

While invaluable pieces of Istanbul's history are quietly eliminated, some of the city's modern cultural landmarks have also been devastated by the pandemic. In March, two of the city's iconic cinemas, Atlas in the Beyoglu district and Rexx in Kadikoy, were permanently closed due to financial trouble. It was tragic news for the city's cinema lovers, as Atlas and Rexx trace their history to the early republican era and were two of the few remaining independent theaters in Istanbul, where most theaters today are located in shopping malls.

It was later reported that the Ministry of Culture and Tourism plans to reopen Atlas as a cinema museum, while the fate of Rexx is uncertain.

Meanwhile, the pandemic presents a wider threat to cultural heritage throughout this part of the world.

“The traditionally tourism-dependent region has never seen a greater disaster for its tourism and corresponding bounty, but also such a pitfall for its heritage, probably since the advent of mass tourism in the mid-19th century,” said Iason Athanasiadis, a journalist covering heritage issues in the Mediterranean region.

“It was that [mass tourism] which activated the local sensitivity towards heritage and resulted in money being invested, sometimes detrimentally for the heritage in question, but invested nonetheless. It also resulted in the blockbuster school of heritage renovation where something is fixed up with a view to spectacularity, almost as a prop in a film set, or more likely the Instagram feeds of thousands of tourists,” Athanasiadis told Al-Monitor.

While the concept of overtourism is a frequent topic of discussion, particularly in cities like Athens, Venice and Barcelona and the Greek islands, coronavirus is and could continue to result in the complete opposite.

“It's this type of archaeology, intended to make the past come alive for the masses, which may be a victim to lowering tourist numbers and the passing of the era of mass tourism, should the virus persist,” Athanasiadis said.

Editor's note: May 8, 2020. This article has been updated since its initial publication.