End of lockdown brings avalanche of demonstrations to Israel

People from across Israeli society have been demonstrating against the government, demanding both looser and tighter restrictions and increased aid 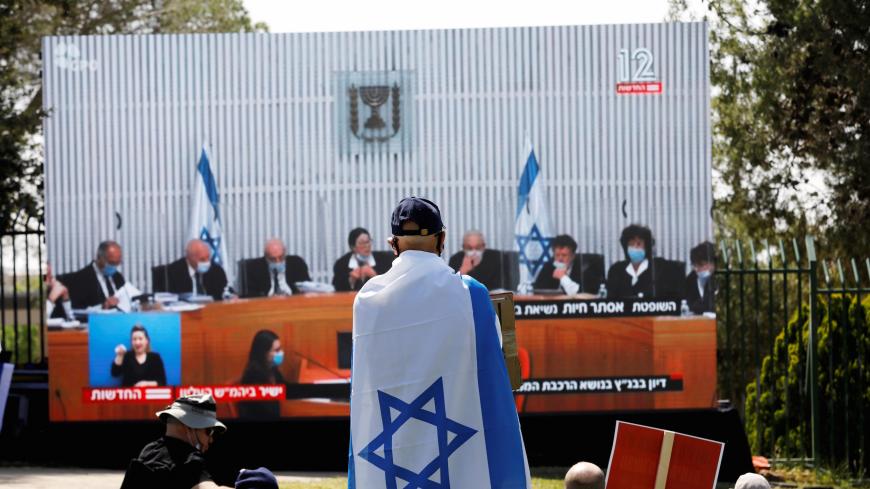 Israelis protest in front of a placard showing the High Court outside the Knesset against Prime minister Benjamin Netanyahu, who is charged with corruption, serving as prime minister of Israel's new unity government, in Jerusalem, May 3, 2020. - REUTERS/Ronen Zvulun

Hundreds of people demonstrated on May 3 outside the High Court in Jerusalem, calling on the justices to block indicted Prime Minister Benjamin Netanyahu from leading the next government. Facing them were hundreds of Netanyahu’s supporters, claiming that their leader is being persecuted. Demonstrations continued today as the court continued to consider the petitions submitted against Netanyahu assembling the next government and against the unity government agreement signed between the Likud and Blue and White parties. With the High Court deliberations broadcast live, demonstrators followed the hearings on huge screens outside the court.

Even though the country has just begun easing restrictions over the novel coronavirus pandemic, demonstrations are back. Israelis were ordered to stay home on April 29 for Independence Day, but once the lockdown released, people went back to the streets for all sorts of reasons. In some cases, opposing demonstrations mixed with one another as people from all walks of life expressed anger and despair.

Staff of municipal children day-care centers demonstrated on April 30 in front of the Knesset, demanding to be fully compensated for the closures in March and in April. That evening, teachers and owners of private kindergartens held a demonstration of their own in Tel Aviv’s Rabin Square, demanding financial help. The teachers also demanded that the government not reopen the kindergartens on May 3, but wait to be sure that the pandemic is really over. Hundreds of small business owners and self-employed workers joined them, calling for increased help from the government and the easing of restrictions to allow them to return to work.

Ahead of the protest, the Tel Aviv municipality put down place markers for demonstrators to use to maintain the required six-feet distance between each other, reading, “Preserving democracy, preserving health.”

The Black Flag movement against the destruction of Israel’s democracy and against Netanyahu’s continued rule held three demonstrations on April 30: one in front of the Knesset, one in front of the High Court and one outside the prime minister's official residence in Jerusalem.

On May 1, surfers demonstrated at the Herzliya marina. Instead of the usual signs, they carried their surfboards and demanded the government "release the sea." Traditional May 1 demonstrations were held in Tel Aviv, Jerusalem, Haifa and Nazareth.

Demonstrations continued with force on Saturday, May 2. Several organizations united for demonstrations in Haifa, Jerusalem, Beersheba, Eilat and the Arab town Kafr Qasim as Arab Israelis joined the national waves of protests. Many Arab demonstrators explained that they too are part of the movement against the destruction of democracy; others complained about the dire economic situation, arguing that Arab towns and villages were sidelined for government financial aid. That night, more than a thousand Israelis gathered for the third consecutive weekend in Rabin Square, demonstrating against Netanyahu’s new coalition deal.