Iraq to launch investigations against killing of protesters

Iraq’s Prime Minister Mustafa al-Khadimi announced the formation of an investigation committee to look into the killings of Iraqi protesters. 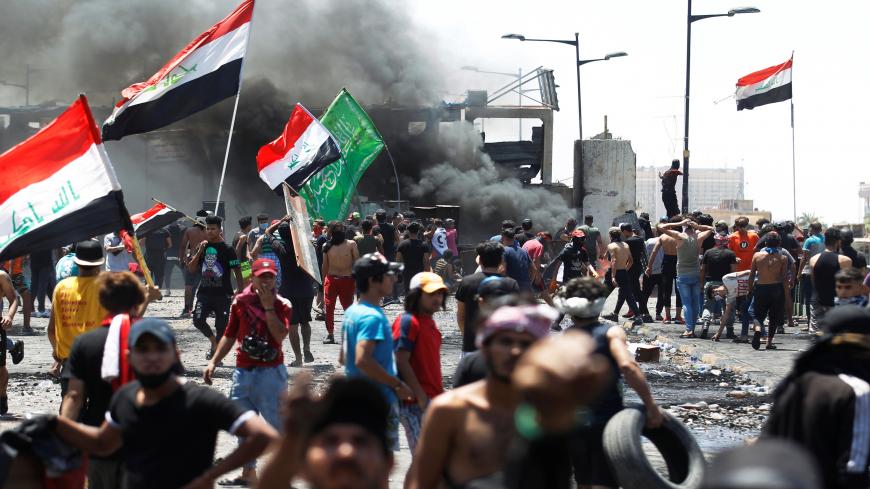 Demonstrators gesture as they take part in the ongoing anti-government protests after newly appointed Iraqi Prime Minister Mustafa al-Kadhimi called for the release of all deatined protesters, at Jumhuriya Bridge in Baghdad, Iraq, May 10, 2020. - REUTERS/Khalid al-Mousily

BAGHDAD — The new Iraqi government has begun procedures to reinvestigate the violent acts during the popular protests that broke out in October and killed more than 700 people and injured over 25,000. The decision was greatly welcomed at home and in the international arena. The United Nations Security Council called for “transparency during the investigation.”

Following the first meeting of his government May 9, Prime Minister Mustafa al-Khadimi announced the formation of an investigation committee, whose members have not been disclosed so far. He said that the committee will work on uncovering the names of the parties responsible for killing hundreds of protesters who have been calling for reform and the trial of corrupt politicians.

The committee is currently being formed and its members will be announced at a later stage. This is the second committee of this kind, following the one that was formed by Adel Abdul Mahdi, former prime minister who resigned at the end of November 2019, which did not yield satisfactory results for the protesters and failed to indict any party behind the bloody events that took place in central and southern Iraq.

The head of the Bayariq al-Khair parliamentary bloc, Mohamed al-Khaledi, had said Dec. 1, 2019, that the families of the victims can now file a complaint against the former prime minister. However, Ultrairaq had reported in February that the two largest parliamentary blocs, the Sairoon Alliance and Fatah Alliance, had assured Abdul Mahdi to stand against any attempt of trying the former prime minister.

The political parties for the most part support the government in conducting an investigation into the ongoing violence that started last fall. The parties, however, have different stances in regard to the responsibility of Abdul Mahdi and his government, since he also served as the supreme commander of the armed forces, accused of using excessive force against the demonstrators, and was supposed to take a decision based on internal voting as per the constitution. Thus, the investigation entails the accountability of all involved ministers.

The Sairoon Alliance led by Muqtada al-Sadr stressed that the outcome of the current investigation will not be conclusive. Badr al-Ziyadi, a member of parliament of the alliance, told Al-Monitor, “Under concordant governments, independent investigations remain far-fetched. Investigation committees will most likely be politically motivated and yield false results.”

He added, “Yet we hope that the new government would be able to track down the perpetrators who have been targeting protesters across different parts of the country.”

Ziyadi expressed hope that an investigation would be launched into corruption cases in the previous government in order to prove its seriousness in implementing the government investigation. “It seems the parliament is heading to make a decision banning accused politicians from leaving the country,” he added.

Raad al-Dahlaki, member of parliament for the Iraqi Forces Alliance, said that his alliance also demanded the prime minister “to reveal the names of those involved in violence against Iraqis and ban them from traveling until the completion of the investigations.”

Meanwhile, the Fatah Alliance, which includes the leaders of the Popular Mobilization Units and is led by Hadi al-Amiri, considered that any indictment of Abdul Mahdi's government entails the accusation of all the political blocs that participated in his government, according to Hanin al-Qaddu, a member of the alliance.

“Per the constitution, indicting the Iraqi government ought to happen for the entirety of the government, which means holding accountable all the political parties that were involved,” he told Al-Monitor.

Qaddu said the investigation into the killing of the protesters “is a difficult and complicated process that involves several considerations. I do not believe the current situation is conducive for such a step.”

He added, “Should the investigation committee be able to make a breakthrough and prove the involvement of certain parties in the killing of protesters, then it would be easier to pinpoint the parties behind the targeting of the security forces and the headquarters of political parties.”

The protest coordination committee set a time frame to conduct similar investigations into the wounding and killing of thousands of protesters. Zulfiqar Hussein, member of the Baghdad coordination committee, told Al-Monitor, “Former Prime Minister Adel Abdul Mahdi represented the head of the executive authority and is the first to blame for the violence that happened against protesters during that period. He should be tried for the intentional and unintentional killing of innocent people. Any other explanation or interpretation of the events is merely an attempt to protect him.”

Ali al-Tamimi, head of the Constitutional Center for Legal Research and Studies, told Al-Monitor, “Prosecuting security forces and even the prime minister in the killing of protesters is totally legal and constitutional based on a set of laws, including the Military Penal Code, the Internal Security Forces Law, the Civil Penal Code as well as the International Criminal Court Law, which do not exempt the prime minister who serves as the commander of the armed forces. This holds true even if he did not give direct orders to kill demonstrators.”

He concluded, “The crimes that are being investigated do not fall under the statute of limitations according to the Iraqi law and the International Criminal Court. The prime minister has the right to file a request to form a specialized court to try the accused of killing the protesters as crimes against humanity."