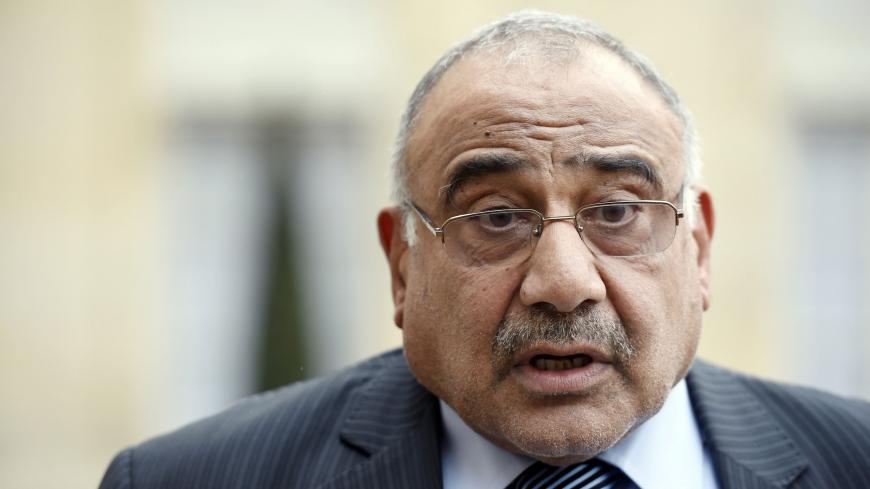 Most of the political forces participating in the Iraqi parliament have stressed the need to leave the quota system behind. The deeply entrenched differences, however, surfaced during the parliament session that convened to give confidence to the new government, which predicts four years of tug-of-war and conflicts of interest.

The council of Dhi Qar province, the fourth largest of Iraq, criticized in an official statement on Oct. 27 the government of new Prime Minister Adel Abdul Mahdi and called it “disappointing and a partisan government par excellence,” adding, “In light of the current situation, we expect the government to fail or slack in providing its services to citizens.”

The Iraqi parliament voted Oct. 24 on Abdul Mahdi as prime minister. Parliament also gave confidence to 14 ministers from Abdul Mahdi’s list of candidates. But the deep differences between the political parties impeded the voted on eight other ministers, leaving the prime minister with an incomplete Cabinet.

Among those not voted on were the minister of interior and the minister of defense, two positions that have always been a bone of contention among the different political actors in a post-Saddam Hussein Iraq.

In light of the vacuum in sensitive security ministries, the prime minister announced Oct. 26 that he would act as both the minister of the interior and the minister of defense until new ministers are appointed.

Some ministers in the new Cabinets have been accused of belonging to the Baath Party. “Minister of Education [Saba Khairoddin al-Taai ] served as the director of the office of Khamis al-Khanjar [the leader of the Arab project who is accused of having links to the Baath Party and Saddam Hussein's family], and her husband was the director of the security apparatus under Saddam who was involved in [the killing of a group of officers from the Jubur tribe] and the suppression of the '91 uprising,” Iraqi politician Ghaleb al-Shabandar said Oct. 25.

“Minister of Youth [Ahmed Riyad al-Obaidi ] was imprisoned in Camp Bucca for [being accused of] killing based on sect,” Shabandar added.

The issue of the affiliation of some Iraqi politicians, especially Sunnis, with the Baath Party has been a major issue between the different political parties since 2003.

Former Prime Minister and head of the Iraqi National List Ayad Allawi dropped a bombshell when he announced during a televised interview Oct. 21 that Muqtada al-Sadr’s Sairoon Alliance and the Fatah bloc headed by Hadi al-Amiri “took over the major ministries” in their attempt to form a new government. This is despite Sadr’s insistence that his alliance will not go back to the quota system in the formation of the government.

Nassar al-Rabi’i, head of the Sadrist movement political committee, commented on the same day that “the Sairoon Alliance has not nominated a single candidate for the government."

“The Sairoon Alliance will not participate in the government or the opposition until the abolishment of the sectarian and political quota system in the distribution of positions,” he added.

In the same vein, Sadr called upon other blocs to renounce the quota system in forming the government. He tweeted Oct. 15, “Let us save Iraq and leave the quota behind us. Let us keep the corrupt away and renew the era of Iraq with new honest faces” — a jab at Iraqi Kurds.

Two days before that, Sadr addressed Iraq’s Sunni leaders in another tweet: “I swear on our honorable resistance against the occupier, on our unified prayers. I swear on our efforts to expel all those who unrightfully attacked us. I swear on the moderate positions we took with you, especially in Anbar and Mosul and elsewhere, if you abandon the sectarian quotas.”

With these emotional messages, Sadr — who leads the biggest parliamentary bloc — seemed to be seeking the formation of a government away from quotas.

On Oct. 4, he pledged not to nominate any candidate to the Cabinet, giving free reign to Abdul Mahdi to choose his Cabinet.

Also, the Sairoon Alliance issued a statement Oct. 19 praising the Fatah and al-Hikma blocs for agreeing to give the prime minister the freedom to choose his ministers.

It is clear, however, that the political blocs that have benefited from the quota system over the past 15 years insist on squeezing some privileges out of the new government.

The prime minister is not only facing pressure to form the government, but also to form it with regard to Iraq’s external relations. Iraqi parties close to Iran have begun to pressure Abdul Mahdi in terms of his position on the presence of US forces in the country — even before the formation of the Cabinet.

Aletejah TV, which is affiliated with the Hezbollah Brigades, published a report Oct. 6, criticizing what it called a lack of clarity in Abdul Mahdi’s position on the presence of US forces in Iraq. The report predicted that the prime minister is likely to take the US side.

Abu Taleb al-Saidi, a prominent leader in the Hezbollah Brigades, threatened in June to overthrow then-outgoing Prime Minister Haider al-Abadi, saying, “To the head of the United Kingdom Diaspora in Iraq, Mr. Abadi, I say that this sacred blood will bring down your throne.”

It is known that the parties close to Iraq prevented Abadi from ascending to the prime minister post for a second term for many reasons, mainly his positive position on the ongoing US presence in Iraq.

Faced with all this pressure, it does not appear that the prime minister has the upper hand in choosing his ministers or leeway to shape the country’s policies in the coming years.