Will Iraq's Sunnis form semi-autonomous region if US troops leave?

Sunni politicians are said to be discussing the formation of a semi-autonomous Sunni region in Iraq following a parliamentary move supporting the expulsion of US troops from the country. 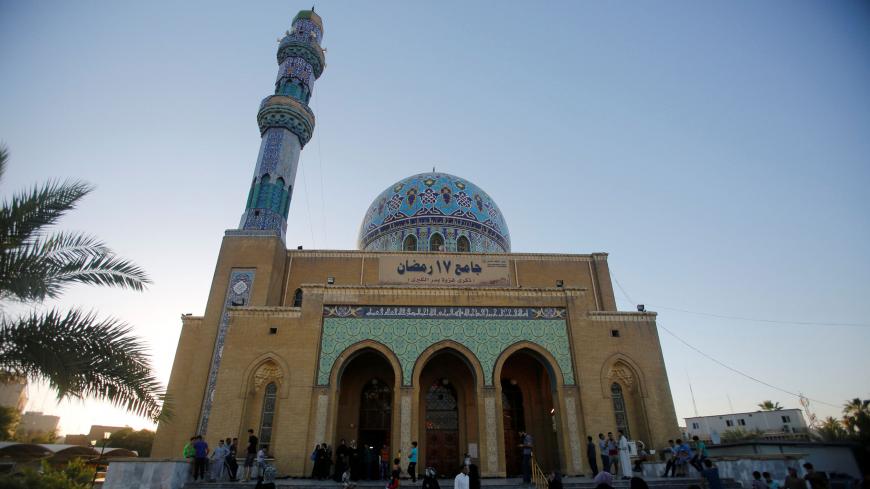 Sunni Muslims attend prayers at a mosque during Eid al-Fitr as they mark the end of the fasting month of Ramadan, in Baghdad, Iraq, June 25, 2017. - REUTERS/Khalid al Mousily

BAGHDAD — In tandem with efforts by Iraqi Shiite blocs to expel US forces from the country, Sunni parties are reconsidering a project to establish a semi-autonomous Sunni region in Iraq.

The move comes in response to the Sunni parties' rejection of a parliamentary vote in support of the Iraqi government ending its security agreement with Washington. Yet Iraqi Sunni forces deny there have been new moves to establish a Sunni region.

The Iraqi parliament voted Jan. 5 to end cooperation with the international coalition and to expel US forces from Iraq. Kurdish and Sunni blocs abstained from the vote, describing it as an ill-calculated response to the US assassination of Qasem Soleimani, the commander of the Iranian Quds Force, and Abu Mahdi al-Muhandis, deputy commander of the Popular Mobilization Units.

Prominent Sunni leaders supposedly met in Dubai Jan. 12 to discuss the formation of a Sunni or Anbar region, as reported by Iraqi media. Although Iraqi parliamentary speaker Mohammed al-Halbusi, a Sunni, denied the news on Twitter and asserted the unity of Iraq, reports of a Dubai meeting provoked controversy. None of the figures alleged to have participated in the meeting issued statements.

Sunni member of parliament Raad al-Dahlaki, of the National Forces Alliance, told Al-Monitor that the Sunni blocs did not have an official meeting in Dubai. “Leaks about forming a Sunni region are an attempt to pressure the representatives of the Sunni provinces to accept the decision to expel the US forces,” he said. “The Sunni region project dates back to 2010. It falls within the constitutional frameworks that the Shiite blocs were adhering to. Objecting to this project at this time seems surprising.”

He added, “The Sunni blocs believe that partnership in running the country no longer exists. Our position on the expulsion of foreign forces has not been taken into account by Shiite parties. Therefore, we are examining our options if ending the missions of the international coalition in Iraq causes major repercussions for security and economic conditions in the country, including the option to form a Sunni region.”

Parliamentarian Mohammed al-Karbouli said, "Clearly, we believe in the unity of Iraq," but "they think an autonomous region means the division of Iraq. I think, personally, that it could be a way to rebuild the country."

Of note, most US bases are located in Sunni and Kurdish areas, where the political forces reject making any decision on the future of Iraq's security situation without the participation of the United States.

Paradoxically, the Sunni forces are already allied with the Shiite blocs forming the government. The alliance, called al-Binaa, meaning building, is spearheading parliamentary efforts to end the US military presence in Iraq.

Meanwhile, the Kurdish blocs are demanding the reappointment of Adel Abdul Mahdi, who resigned as prime minister in November 2019. Yet Abdul Mahdi himself supports evicting foreign forces in response to the desires of the major Shiite forces.

This complex scene suggests that the current constitutional vacuum — triggered by parliament's failure to name a successor to Abdul Mahdi — will continue.

A former deputy for Ninevah province, Abdul Rahman al-Louaizi, told Al-Monitor that the Sunni region project is a political maneuver to achieve a better negotiating position in the talks to form a new government. “This could be a tactic to prevent decisions aimed at ending the foreign military presence in Iraq,” he said. “The idea of ​​the region is difficult to implement, especially at this particular time.”

The Iraqi Constitution of 2005 allows for the formation of regions: “The federal system in the Republic of Iraq is made up of a decentralized capital, regions and provinces, as well as local administrations.”

However, not all regionalization projects have succeeded. Projects such as the Center and South Region, Basra Region, Salahuddin Region and Anbar Region have failed due to the absence of political consensus in Baghdad and fears that such regionalization would divide the country, as the proposed regions were based on sectarian identities.

In practical terms, to form a region requires the application of Article 119 of the constitution, which outlines that provinces may form a region by referendum, at the request of a third of provincial council members or a certain proportion of voters in the provinces being considered for the region. Yet since parliament suspended provincial councils in October 2019, a citizen vote is the only available method.

If passed, a referendum requires the approval of the Council of Ministers within 15 days. Here, the prime minister can block the project, invoking the absence of financial allocations or the expiry of the legal deadline. Yet Abdul Mahdi could claim to not have the power to do so, since he has resigned and is no longer entitled to make such decisions. In a nutshell, the formation of a Sunni region is a long shot.

Yet the claims of a Sunni meeting could have been leaked by Sunni parties to push for new conditions on the next prime minister, including the need to maintain the security deal with Washington to protect Sunni areas and to prevent the expansion of Shiite armed factions in those areas.

It's also plausible that Shiite parties are disseminating the allegations in an attempt to accuse Sunnis of trying to divide Iraq and to prompt them to engage in efforts to drive US forces from Iraq out of fear of being labeled traitors for affiliating with the United States.

A Sunni region remains a possibility in Iraq as long as it does not have the institutions capable of defining the country's interest and foreign policies, as well as if its political system continues to apply sectarian and ethnic quotas to allot governmental positions and agencies.

The matter is not only related to expelling foreign forces, according to parliamentarian Falih al-Issawi. Rather, it's a way to demonstrate that there is the view that a Sunni region is an appropriate solution for how to run the country.