A longtime foreign policy adviser to former Vice President Joe Biden argued on Monday that President Donald Trump’s withdrawal from the nuclear deal has proven both the accord’s supporters and detractors wrong “about a critical thing.” 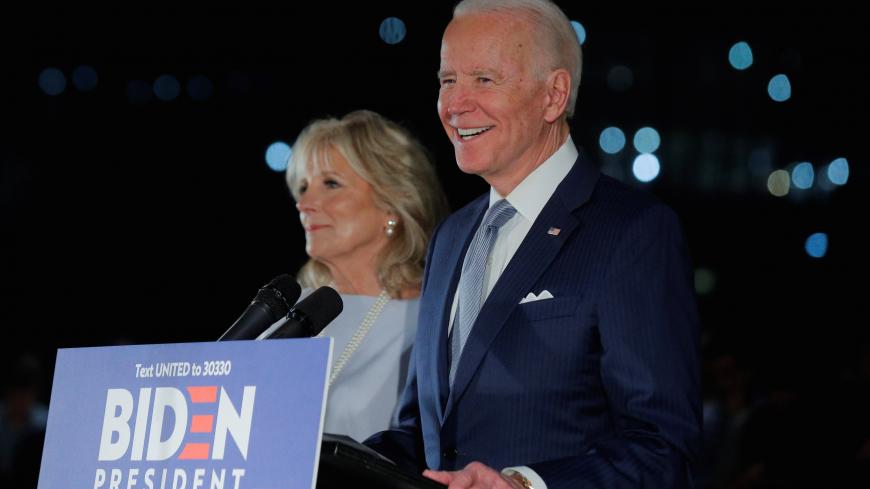 Democratic US presidential candidate and former Vice President Joe Biden smiles as he speaks with his wife Jill at his side during a primary night news conference at The National Constitution Center in Philadelphia, Pennsylvania, US, March 10, 2020. - REUTERS/Brendan McDermid

A longtime foreign policy adviser to former Vice President Joe Biden argued today that President Donald Trump’s withdrawal from the nuclear deal has proven both the accord’s supporters and detractors wrong “about a critical thing.”

“Advocates and defenders of the [deal], myself included, thought that when the Trump administration pulled out and imposed unilateral sanctions, that those sanctions were not likely to be as effective, because the Trump administration wasn’t bringing the rest of the world along with them,” said Jake Sullivan, Biden’s former national security adviser at the White House. “That didn’t turn out to be true. Actually, those sanctions have been very effective in the narrow sense of causing deep economic pain on Iran.”

Still, Sullivan noted that the sanctions themselves have not produced “the magical outcome that the Trump administration is looking for” beyond hammering Iran’s economy. He also argued that opponents of the deal were wrong because reinstating sanctions “turned out to be a fairly straightforward thing” after Trump’s withdrawal.

His remarks came during a virtual interview at the conservative Hudson Institute.

Why it matters: Sullivan, who is informally advising the Biden campaign, helped oversee the Iran deal negotiations under President Barack Obama. Biden has vowed to reenter the nuclear deal and lift Trump’s sanctions if he wins the US election in November and if Iran returns to compliance with the accord. (Since Trump’s withdrawal, Iran has tripled its stockpile of low-enriched uranium allowed under the deal’s limits.)

What’s next: Sullivan went on to argue that a future Democratic administration “should immediately reengage nuclear diplomacy with Iran and look to establish something along the lines of the [deal], but immediately begin the process of negotiating a follow-on agreement.”

“That follow-on agreement, in my view, should deal with the timelines for the restrictions [sunset provisions] and extend them,” said Sullivan. “It should also try to address other elements that we have learned subsequently could be strengthened. And I think that is a perfectly plausible available strategy and a far wiser course than basically demand Iran come out with its hands up … until you get to the brink of war.”

Know more: Learn more about the views of Sullivan and Biden’s other foreign policy advisers in Bryant Harris’ profile of the campaign’s foreign policy brain trust.