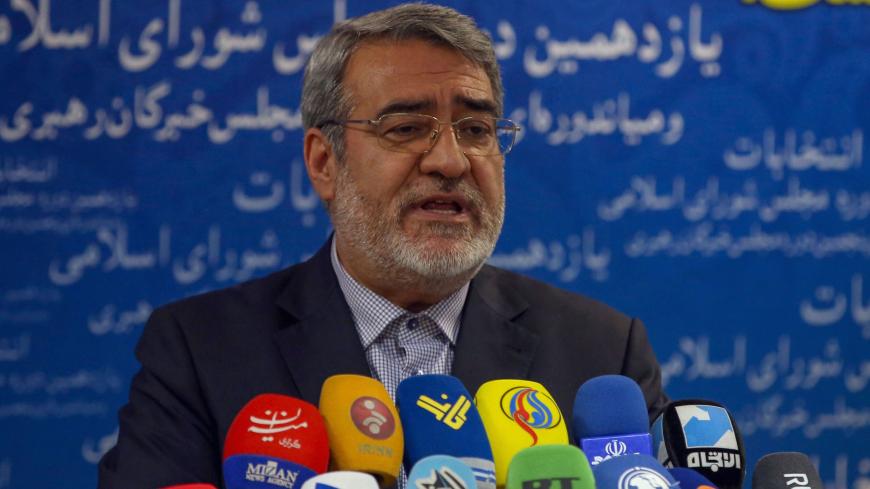 Iranian Interior Minister Abdolreza Rahmani Fazli speaks at a press conference at the ministry during registration for upcoming parliamentary elections, in the capital Tehran, Dec. 1, 2019. - AFP via Getty Images

Iran’s Interior Minister Abdolreza Rahmani Fazli is among those sanctioned over the government’s crackdown on peaceful protests that erupted across the country last year.

"We have reason to believe Minister Rahmani Fazli gave carte blanche orders authorizing Iranian police forces to use lethal force on peaceful protestors and bystanders," Pompeo said in a statement. "His — and the regime’s — goal was to quash these peaceful protests and suppress the rights of peaceful assembly and freedom of expression at any cost."

A sudden increase in gasoline prices prompted widespread anti-government demonstrations in November that reportedly left hundreds dead. Amnesty International documented the deaths of at least 23 children killed at the hands of Iranian security forces, most shot dead when police fired live ammunition into the crowds.

The United States also sanctioned a provincial commander of Iran’s Islamic Revolutionary Guard Corps and seven senior officials in Iran’s Law Enforcement Forces, which the US Treasury says played a key role in the crackdown on protesters and runs detention centers that carry out physical and psychological abuses.

Ali Fallahian, the former head of Iran’s intelligence service, was designated for visa restrictions over his alleged involvement in a number of terror attacks, including a 1995 suicide bombing in the Gaza Strip that killed Alisa Flatow, a 20-year-old US exchange student. He’s also wanted by Interpol for a 1994 bombing that killed 85 people at a Jewish community center in Buenos Aires.

Why it matters:  The sanctions, which freeze any US-held assets belonging to the targets and make any transactions between them and American entities illegal, are the latest in a series of tit-for-tat moves between Washington and Tehran.

Tensions escalated following the Donald Trump administration’s withdrawal from the Iran nuclear accord in 2018 and peaked with the US drone strike on Iranian commander Qasem Soleimani in January.

On Tuesday, the US Navy warned vessels in the Persian Gulf to stay 100 meters away from its warships or risk “lawful defensive measures.” The warning comes a little over a month after 11 Iranian vessels came dangerously close to US naval ships in the international waters.

What’s next:  The latest sanctions come as Iran struggles with a surge in coronavirus cases. The Donald Trump administration has resisted calls to ease its “maximum pressure” campaign of economic sanctions, which Tehran says is hampering its ability to contain the virus.

Most recently, US officials have indicated the administration will attempt to trigger a snapback of UN sanctions on Iran if the UN Security Council doesn’t renew an arms embargo set to expire in October.

Know more:  Mordechai Goldman has the latest on a possible cyber war brewing between Iran and Israel, and congressional correspondent Bryant Harris explains why the United States sanctioned a China-based company for doing business with Iranian airline Mahan Air.