The eight individuals sanctioned include the head of the Revolutionary Guards and the commander of the Basij forces. 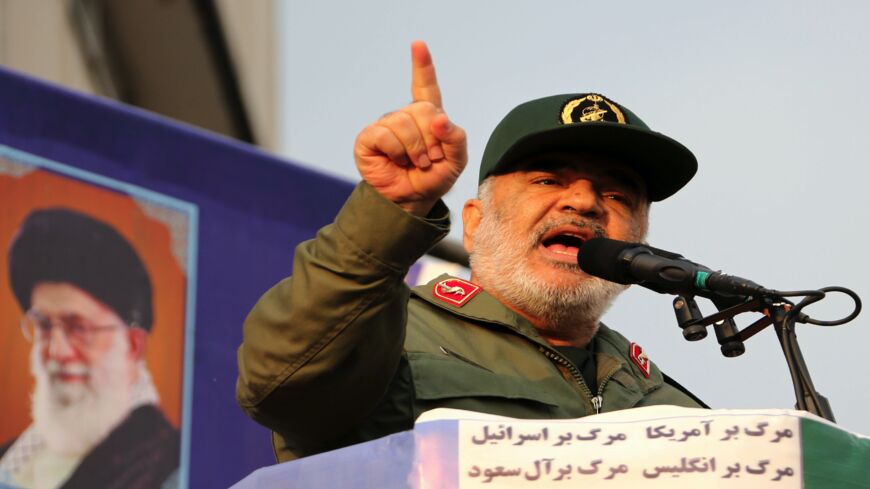 Iranian Revolutionary Guards commander Maj. Gen. Hossein Salami speaks during a pro-government rally in the capital, Tehran's, central Enghelab Square on Nov. 25, 2019. In a shock announcement 10 days ago, Iran had raised the price of petrol by up to 200 %, triggering nationwide protests in a country whose economy has been battered by US sanctions. - ATTA KENARE/AFP via Getty Images

The European Union slapped sanctions on eight Iranian officials and three prisons on Monday over their roles in the deadly crackdown on the peaceful protests that erupted in 2019.

The sanctions on militia commanders and police officers, announced by the EU’s Official Journal on Monday, are the first imposed by the European bloc since 2013.

Amnesty International documented the deaths of at least 23 children killed at the hands of Iranian security forces, most shot dead when police fired live ammunition into the crowds.

Hossein Salami, commander-in-chief of Iran’s Islamic Revolutionary Guards Corps, and Gholamreza Soleimani, head of the IRGC’s Basij Organization, were among those sanctioned. Both are described as bearing “responsibility for serious human rights violations in Iran.”

The EU also sanctioned three prisons facilities where protesters were detained and allegedly subjected to torture. Tehran’s Evin prison, where a number of dual European nationals are currently held as political prisoners, was hit with sanctions.

The penalties announced on Monday include a travel ban and an asset freeze. EU citizens and companies are barred from doing business with the blacklisted Iranians.

Last year, the Donald Trump administration imposed its own set of sanctions on Iranian officials and entities linked to the crackdown, including Interior Minister Abdolreza Rahmani Fazli.

Iranian Foreign Ministry spokesperson Saeed Khatibzadeh condemned the move, adding that Iran was considering a response to “such actions from those falsely claiming to champion human rights.”

The sanctions come as EU member states Germany, France and the United Kingdom try to salvage the nuclear agreement struck by Iran, the United States and other world powers in 2015.

The European trio, collectively known as the E3, participated in talks last week in Vienna with Iranian and American officials aimed at breaking the impasse over who should make the first move. Iran says the Biden administration must lift all sanctions before it comes into full compliance — a nonstarter for Washington.