Intel: China tangled in US sanctions web for ties to Iran’s Mahan Air 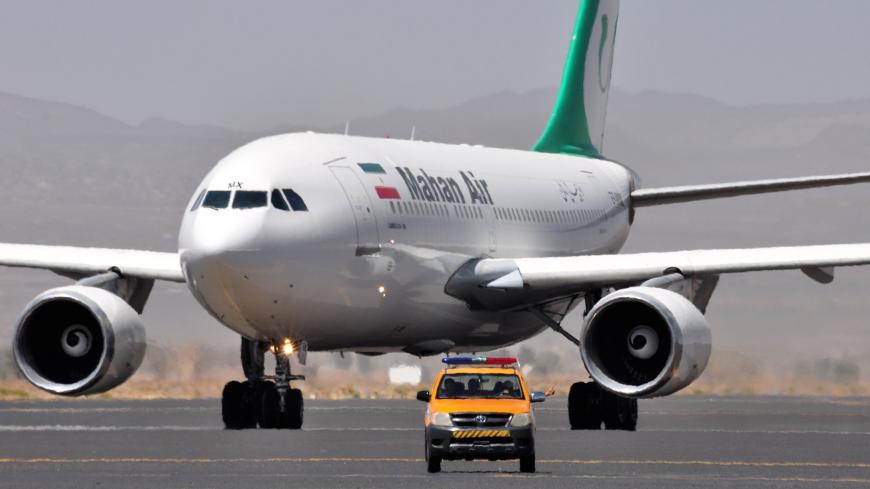 An Airbus 310 airplane owned by Mahan Air and carrying Iranian health aid is seen at Sanaa International Airport after officials from the Shiite militia-controlled city signed an aviation agreement with Tehran, in Sanaa, Yemen, on March 1, 2015. - Sinan Yiter/Anadolu Agency/Getty Images

“The People’s Republic of China is one of the rapidly dwindling number of countries that welcomes Mahan Air, which ferries weapons and terrorists around the world for the Islamic Republic of Iran,” Secretary of State Mike Pompeo said in a statement upon announcing the sanctions. “Such cooperation has consequences.”

Why it matters:  Relations between the Donald Trump administration and China have rapidly soured as the two sides continue taking shots at each other over the global coronavirus pandemic. Biting sanctions on Iran have formed the crux of Trump’s "maximum pressure" campaign against Iran, but they also allow the United States to penalize other countries for economic relations with Iran that run afoul of unilateral American sanctions.

For instance, Pompeo also noted that Mahan Air facilitates “shipments to Venezuela to support the illegitimate former regime and its desperate attempts to boost energy production, which had fallen due to its own gross mismanagement.”

“It is equally troubling that Mahan Air appears to be carrying gold from Venezuela’s vaults back to Iran, depriving the Venezuelan people of resources needed to rebuild their economy,” said Pompeo. Five Iranian tankers are carrying gas to Venezuela despite US sanctions.

What’s next:  China has threatened to veto a US resolution at the United Nations Security Council to extend an arms embargo on Iran that expires in October as the first sunset provision under the nuclear deal. Should China do so, the Trump administration has threatened to trigger a mechanism that would reinstate UN sanctions on Iran — though it’s unclear whether the United States has the authority to do so, given its 2018 withdrawal from the nuclear accord.

Know more:  The United States is also encouraging close allies to reduce their ties to China. During a visit to Israel last week, Pompeo sought to dissuade Prime Minister Benjamin Netanyahu from awarding China a contract to construct the largest water desalination plant in the world.