Although Egypt’s chairmanship of the African Union ended in 2019, it continues to focus on Africa, especially amid the coronavirus pandemic. 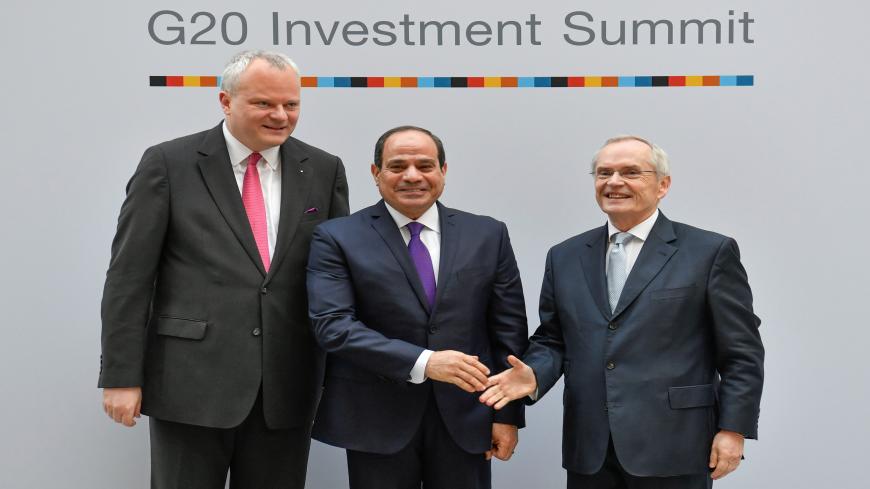 Stefan Liebing (L), chairman of the German–African Business Association, and Heinz-Walter Grosse (R), chairman of the Sub-Saharan Africa Initiative of German Business, pose with Egypt's President Abdel Fattah al-Sisi as he arrives to attend the "G-20 Investment Summit - German Business and the CwA Countries 2019" on the sidelines of a Compact with Africa, Berlin, Germany Nov. 19, 2019. - John MacDougall/Pool via REUTERS

CAIRO — Even after its one-year chairmanship term of the African Union (AU) ended in 2019, Egypt continues to prioritize Africa when it comes to its foreign policy.

On April 29, Egyptian President Abdel Fattah al-Sisi participated in a mini summit for AU leaders held via video conference to discuss the coronavirus outbreak. During the meeting, Sisi underlined the importance of the results reached in previous summits, mainly the establishment of an African fund to confront the novel coronavirus aimed to mobilize resources and implement projects in the health-care sector.

Sisi stressed the need to communicate with international partners and global institutions to support African countries economically in the medium and long run and offer the necessary support, including medical and preventive supplies to halt the pandemic, as part of the Egyptian initiative proposed in a previous meeting.

During a March 26 online mini African summit, African leaders agreed to establish the AU’s COVID-19 Response Fund, under the framework of the African Business Coalition for Health. Sisi, who took part in the meeting, pledged his country’s financial support for the fund and proposed a debt relief initiative for African countries, which was widely welcomed by African leaders. His initiative was addressed to the Group of 20 (G-20), the Group of Eight (G-8), the International Monetary Fund and the World Bank to consider easing debt burdens in light of the repercussions of the coronavirus crisis.

The COVID-19 Response Fund’s Board of Trustees held its first meeting via video conference on April 27. The fund is tasked with collecting the needed resources to support the already fragile health-care systems in African countries, and providing medical and preventive equipment to the health-care sector, in coordination with the Africa Centers for Disease Control and Prevention. The latter estimates that the strategy to deal with the virus requires $450 billion, of which $61.5 billion have been collected so far through donations from businessmen and international partners.

As of May 7, coronavirus infections in Africa reached 52,989 cases, with 2,018 deaths, according to World Health Organization (WHO) data. Although numbers are much higher in the United States and Europe, the WHO and the United Nations warned of the risk of the coronavirus spreading in Africa, amid fears the fragile health-care system will collapse, saying the worst is yet to come. Egypt, South Africa, Morocco and Algeria have been the hardest hit in Africa so far.

Mona Omar, former assistant to the foreign minister of African affairs and African Union affairs, considered the establishment of the African fund an important step in the fight against the coronavirus as it unites governmental and private sector efforts.

Omar told Al-Monitor over the phone that the debt relief initiative proposed by Sisi to major countries and international institutions shows how important Africa is for Egypt’s foreign policy. Egypt sees Africa as a priority and carries the continent’s concerns to all international events it participates in, she said.

According to Omar, Egypt has large investments in Africa and its major companies are entrenched in the continent, like the Arab Contractors company, Elsewedy Electric, Qalaa Holdings and Hassan Allam Holding. This could help Egypt play a role in the fight against the virus in Africa, by continuing its projects in the African countries and supporting the health-care sector.

She said Egypt sent its experts to several African countries, such as Tanzania, Congo, Sudan and South Sudan, to offer them technical support in implementing development projects, which proves that Africa has become a priority of the Egyptian foreign policy for cooperation, integration and achievement of common interests.

Rashad Abdo, director of the Egyptian Forum for Economic and Strategic Studies, said that the African fund and the Egyptian debt relief initiative is a good step that reflects Egypt’s influential role in the continent and support for its brethren in these tough times due to the virus that causes COVID-19.

Abdo told Al-Monitor on the phone that Africa not only needs financial support from international institutions, but it also needs development and investment projects to revive its economy and increase employment, in addition to limiting the repercussions of COVID-19 on Africans.

He said that Egypt is prioritizing Africa and has undertaken development projects in Sudan, South Sudan, Congo and Tanzania, despite its tough economic conditions. Its internal crises have not prevented it from playing a pioneering role in Africa, he added.

Abdo expects Egyptian businessmen and companies in Africa to contribute largely to the success of the fund in supporting anti-coronavirus government efforts in the framework of “social responsibility.”

Mohammad al-Arabi, former foreign minister and head of the parliamentary Foreign Relations Committee, said that although Egypt’s chairmanship of the AU ended, Africa is still a priority for the country, especially given the coronavirus pandemic.

Arabi told Al-Monitor that Egypt’s anti-coronavirus efforts come at a time when each country is preoccupied with its own issues, whether in the world or Africa. Egypt has proven to have an insightful perspective, as it can only succeed in countering COVID-19’s negative implications by cooperating with others, notably in Africa.

He expressed his concerns over the positions some African countries are taking — in reference to Ethiopia that vowed to continue filling the controversial Renaissance Dam on the Nile River despite its dispute — and the conflict in Libya, which could hinder the efforts deployed to counter the coronavirus, He called on the AU, which is currently presided by South Africa, to unite all parties around the main goal of containing the virus outbreak.

He further urged international associations and major countries to support Africa, which was already suffering under difficult conditions before the pandemic.

Arabi stressed that Egypt is playing its role to the fullest in Africa through development projects. Even when Cairo held the presidency of the AU, it carried the African cause to international forums, such as in Russia, Germany, China and France, and is still doing so.