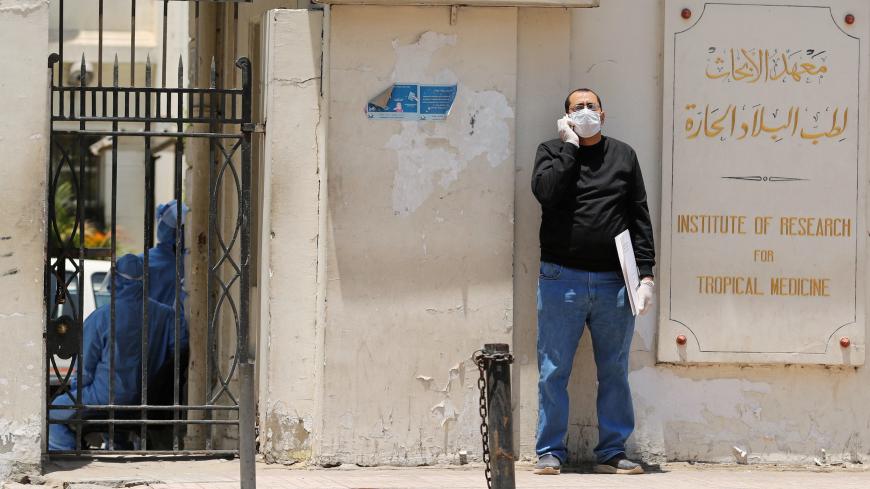 A man wearing a protective face mask and gloves stands outside the Institute of Research for Tropical Medicine amid concerns about the spread of the novel coronavirus in Cairo, Egypt, May 26, 2020. - REUTERS

Health officials reported 910 new positive tests for the coronavirus over a 24-hour period, bringing the total number of cases to 19,666. The ministry announced 19 more deaths, for a total of 816 nationwide.

Egypt’s previous daily record was 720 cases, which the Health Ministry announced on May 19.

The Arab world’s most populous country has reported a relatively low number of COVID-19 cases compared to many of its neighbors, which critics attribute to insufficient testing. Factoring in undetected infections, Egypt’s Higher Education Minister Khaled Abdel-Ghaffar estimated last week that the total number of cases in the country exceeded 71,000.

At least 19 doctors have died and 350 are infected with the virus, according to Egypt’s medical union, which recently warned “the health system could completely collapse” if the government doesn’t do more to protect health care workers.

The country has designated 17 coronavirus-specific hospitals, which reportedly reached capacity in early May.

Last month, Egypt extended its state of emergency to help authorities deal with both the threat of the coronavirus and insurgent activity in the Sinai region. The emergency powers allow security forces to make sweeping arrests and search homes without a warrant.

President Abdel Fattah al-Sisi’s security forces have since cracked down on the spread of perceived misinformation about the coronavirus. Several activists have been arrested in recent weeks for criticizing the government’s handling of the crisis.

On Thursday, the government shortened the length of the curfew by several hours but restaurants, night clubs and shopping malls will remain closed.