Coronavirus spreads in Egypt, can authorities control it?

Egypt announced a set of measures to contain the spread of the coronavirus as the number of infected cases rise across the country. 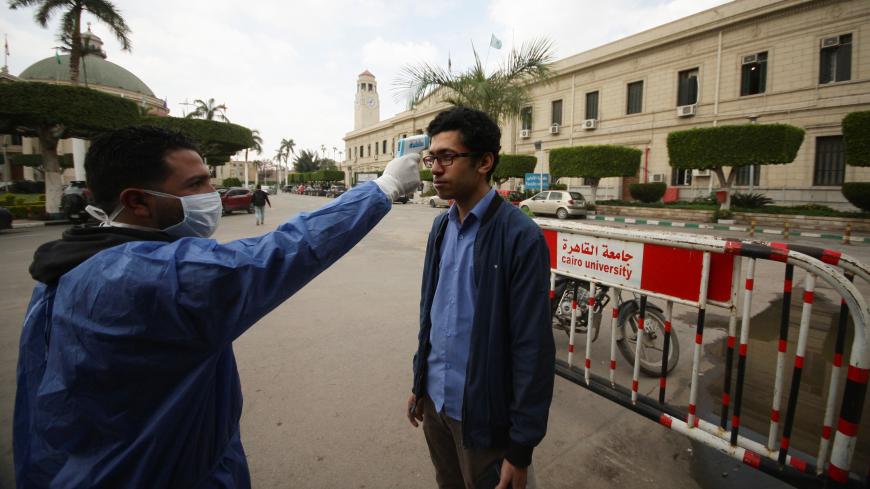 A month after Egypt confirmed its first case of the coronavirus on Feb. 14, the government announced that it would close its airports and restrict air travel starting March 19 until the end of March, as part of efforts to slow the spread of the virus.

Prime Minister Mustafa Madbouly told a news conference March 16 that “the number of infected cases of the coronavirus is increasing, so we started taking quick preventive measures, including suspension of classes. Our plan includes three phases to deal with the virus. The government had to move to the second phase.”

He announced other measures that include reducing the number of workers in the public sector, particularly those working in the government amounting to about 6 million public employees. He appealed to all Egyptians to take preventive measures and to not underestimate the virus.

On March 14, President Abdel Fattah al-Sisi announced the closure of schools and universities across the country, and allocated 100 billion Egyptian pounds (roughly $6.3 billion) to deal with any possible repercussions of the coronavirus. Stepping up the preventive measures came as the country faced its sixth fatality; the number of confirmed cases reached 196 on March 18.

An analysis conducted by researchers from the University of Toronto, however, has estimated that thousands of people could be infected in Egypt. They said the number could be more than 19,000 — while the conservative estimation stands at 6,000.

“Using the airline data and exported case data, as well as some information on the average length tourists stay in the region, we estimated an outbreak size of about 19,000 cases — with a confidence interval of 6,000-45,000,” Ashleigh Tuite, specialist of Division of Epidemiology at the University of Toronto, told Al-Monitor.

Tuite said they conducted their analysis on March 6, when there were three reported cases in Egypt and at least 14 exported cases from Egypt to four countries. Cairo confirmed the first recorded case in Africa on Feb. 14.

She explained, "[Because Egypt has a young population] this could result in a lot of mild infections that might not be detected even with widespread transmission, particularly if there isn't active testing and case finding happening in the country.”

Egypt’s Health Ministry dismissed the estimation saying it reports the confirmed cases to the World Health Organization (WHO) only.

“The problem is that the government has not provided citizens with credible information on how to combat it in due course,” said Ayman Wafik, a researcher at Right to Health, a local nongovernmental organization.

Meanwhile, WHO praised the Egyptian efforts in containing the spread of the coronavirus. On March 15, WHO representative in Egypt John Jabbour told CNN that Egypt and Jordan have the best monitoring systems in the region, and he praised Egypt's containment of the virus' infection rates.

Others argue that the government has been late in taking required measures, such as closing schools and suspending flights from and to infected countries like China and more recently Italy.

Following the decision to cancel classes, panicked shoppers have swept supermarket chains across the country, stockpiling on foodstuffs as rumors circulated on social media that the government would impose a curfew. But the government denied planning to take such a step.

“The recent precautionary measures — although needed and timely — added to the citizens’ confusion and increased panic,” Wafik said.

He noted that people have a role to play, too, and that the government alone is not capable of dealing with such a global pandemic.

Alaa Ghanaam, an expert in health-care sector reform, said the Egyptian government has dealt with the coronavirus crisis in a balanced manner, compared with other countries. “It gradually raised the degree of preparedness and did not overestimate the crisis, to prevent the panic of its people and minimize the economic losses,” he told Al-Monitor.

He said Egypt has reached the second stage in its plan to face the virus. “This crisis is the first serious test of medical initiatives and of the medical insurance system adopted by the government in the past two years,” he added.

Regarding the government's capacity to control the virus, Ghanaam said Egypt has the strongest preventive system in the region, along with firmly quarantine measures.

He said passengers arriving at the country's airports and seaports are being subjected to medical tests and that anyone suspected of having the virus is quarantined for 14 days. Meanwhile, the minister of health ensured that isolation departments in hospitals in every governorate entrusted with dealing with such cases have been equipped.

Egypt had also gained experience from previous crises such as the 2005 swine flu epidemic, according to Ghanaam.

During the last swine flu wave in Egypt back in 2014, 38 people died of the 318 people diagnosed with the virus.

“The current challenge for the government is to minimize the losses,” he concluded.