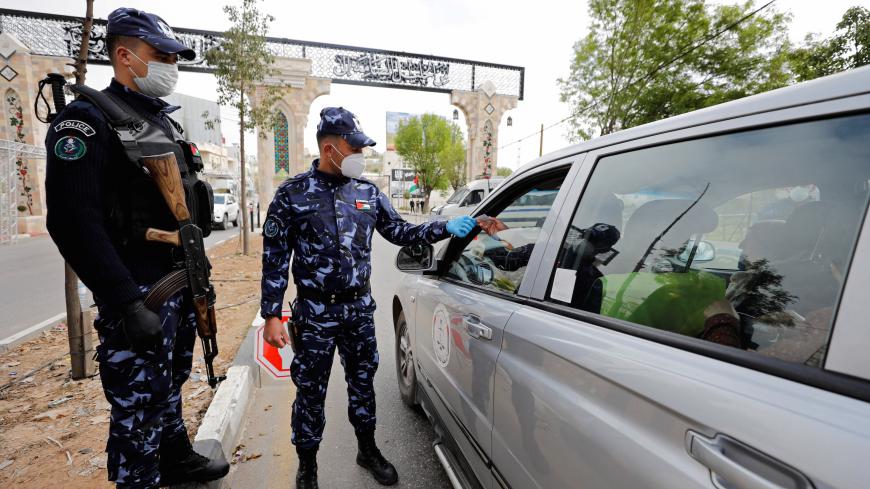 Palestinian police officers check the identity card of a vehicle's occupant during a home-confinement order to prevent the spread of the coronavirus, Hebron, the West Bank, April 7, 2020. - REUTERS/Mussa Qawasma

On May 7, Amnesty International released a statement saying that five Palestinians had been arrested by Palestinian officials in the West Bank and the Gaza Strip in March and April. Both territories put a state of emergency in place in March to fight the coronavirus outbreak. The arrested were merely critical of the Palestinian authorities online and their detentions were not warranted, the organization’s deputy head for the Middle East and North Africa said.

“Authorities in both the West Bank and Gaza Strip have violated the right to freedom of expression by arbitrarily detaining individuals solely for peacefully sharing their views on social media,” said Saleh Higazi in the release. “This must immediately stop.”

The West Bank is considered by most countries to be occupied by Israel. However, the Palestinian Authority (PA) controls some parts of the territory, while other areas Israel controls directly. The Gaza Strip is governed internally solely by Hamas, though Israel controls its external borders. Amnesty International frequently criticizes Israel’s actions in both territories, including restrictions of Palestinians’ movement.

Amnesty International listed five people arrested in March, and said this constituted a pattern. Some of the arrests were related to criticisms of Palestine’s coronavirus response. Zakaria Khuwaylid was arrested by the PA in April for criticizing Palestinian President Mahmoud Abbas’ coronavirus-related actions on Facebook. He was released on bail on April 21, Amnesty International said in the release.

Hussam Khader was arrested on March 5 after criticizing on Facebook Abbas’ comments on a medical strike at the time. He was released on March 9 when the charges were dropped, according to Amnesty International.

In Gaza, activist Rami Aman was arrested on April 9 and remains in detention after organizing a video call with an Israeli organization. He has not been brought before a judge, according to the group.

Aman’s arrest was a source of controversy on Palestinian social media. On April 13, fellow Palestinian activist Hind Khoudary admitted tagging Hamas officials in a Facebook post about Aman’s video with an Israeli peace group. She said she does not support Hamas, but tagged them because “no form of joint activity, cooperation or with Israelis is acceptable,” she wrote in an open letter posted on Twitter.

Khoudary previously worked with Amnesty International, and was arrested by Hamas herself in 2019.

The coronavirus pandemic has damaged the Palestinian economy, which was already weakened by the occupation and conflict with Israel. Palestinians working in Israeli territory have had to stop due to the virus. This has resulted in a major loss of income and revenue for the Palestinian territories via the wages their residents earn there, among other issues.

Amnesty International said the coronavirus response must not bring about rights violations.

“The Palestinian authorities must fulfill Palestine’s obligations under intentional law and ensure that international human rights law and standards are at the centre of all responses to COVID-19,” the statement read.