Palestinian journalists face pressure from multiple directions, even in the relative freedom of the internet. 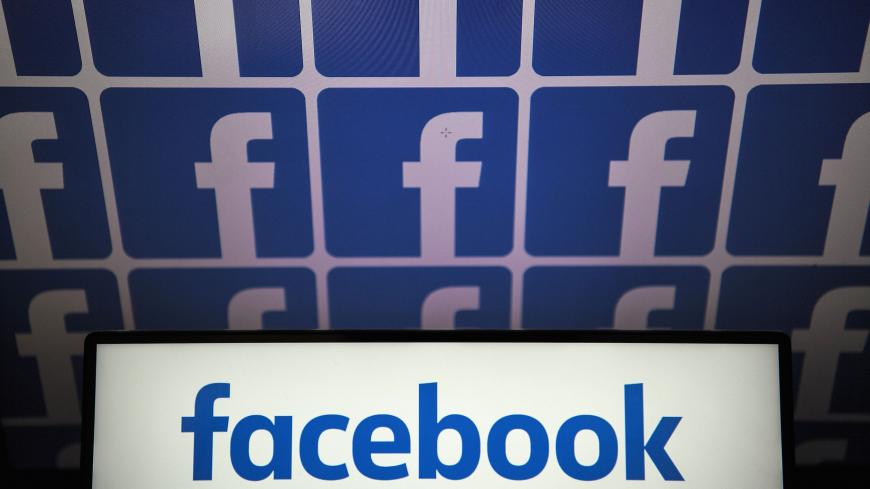 This picture taken on July 4, 2019, in Nantes shows the logo of the social networking platform Facebook. - LOIC VENANCE/AFP via Getty Images

The difficulties facing Palestinian journalists have led many to express themselves solely on digital media. But even with this relatively free medium, they are now dealing with a restrictive cybercrime law and pressure from Israel and social media companies in the absence of clearly defined rights and responsibilities. These three powerful forces are threatening press freedom in Palestine.

Palestinian officials including government spokesman Ibrahim Milhem, who spoke to Al-Monitor, insist that while press freedom is guaranteed by both local and international law, “the government will not tolerate hate speech, slander and other forms of defamation on digital media.”

Nibal Thawabteh, director of the Media Development Center at Birzeit University, told Al-Monitor that Prime Minister Mohammad Shtayyeh has been a supporter of journalism. “Prime Minister Shtayyeh is a smart person who has spent serious efforts on issues of development and breaking away from the occupation, and for that he has built a strong connection between the government and the people, and media has been an important vehicle for that.”

Walid Batrawi, a veteran journalist and media instructor, told Al-Monitor that while journalists are “practicing their profession freely, the number of professionals is decreasing and journalists are practicing self-censorship more and more due to the overall restrictive atmosphere.”

Press freedom issues therefore are increasingly being fought on the digital landscape, according to Palestinian human rights and media freedom activists.

The latest use of the Palestinian cybercrime law against a journalist was the case of Tulkarem-based journalist Sami al-Sai, who was accused of running a Facebook page critical of certain Palestinian security officials in Tulkarem and for being a supporter of Hamas. His lawyer Muhannad Karaje told Al-Monitor that Sai was released July 1 on bail. He said that the judge was convinced there was no need for any further investigation in the case.

The Palestinian Center for Development and Media Freedoms, or the MADA Center, condemned the arrest in a June 11 statement and called for Sai's release.

Human Rights Watch stated June 25 that it has documented the “systematic practice of Palestinian security forces arbitrarily arresting and torturing critics and opponents, including for peaceful expression.” HRW said that data provided by the Palestinian government indicate that “between Jan. 1, 2018, and March 30, 2019, the [Palestinian Authority] detained 752 Palestinians over social media posts.” Shtayyeh had vowed in a July 2019 meeting with the group that there would be “no arrests or persecution” of Palestinians for peaceful free expression, the rights organization added.

Omar Shakir, HRW’s Israel and Palestine country director who was deported from Israel and is now based in Amman, told Al-Monitor, “If Prime Minister Shtayyeh is serious, he should start by releasing Sai from detention.”

Freelance reporter Mustafa Ibrahim wrote for the pro-PLO MaanNews May 6 that since March, “the coronavirus emergency has given cover to undermine freedom of expression in Palestine.”

Last October, the Ramallah Magistrate Court ordered local internet service providers to block access to at least 49 news sites in the West Bank and Gaza following a request from the Palestinian attorney general’s office, according to reports from the regional press freedom group Skeyes Center for Media and Cultural Freedom, the Palestinian online rights organization Arab Center for the Advancement of Social Media and the Palestinian Journalists Syndicate.

On June 17, 13 Palestinian nongovernmental organizations and nonprofit media outlets created a coalition to defend digital freedom of expression. The coalition, which includes the MADA Center and Maan News, said that it plans to protect the rights of journalists and freedom of expression through legislation and relevant international organizations.

In addition to problems with Palestinian security forces, journalists, especially those living in Jerusalem, are seeing their press freedom progressively curtailed. Journalists from Palestine TV have been arrested and banned from working in Jerusalem. Israel has regularly requested that digital companies block Palestinian news sites on claims that they incite violence. The Vienna-based International Press Institute and even the Israeli Press Syndicate have condemned Israel for these violations.

Israeli authorities are accused of committing more than 50 violations against Palestinian journalists in occupied Jerusalem during the first half of 2020, according to the Journalists Support Committee. In a June 18 report, the nonprofit organization representing journalists said the Israeli occupation expelled four journalists from the city, arrested seven and summoned 14 for police interviews.

Mousa Rimawi, director of the MADA Center, said that the arrests come at a time “when Israeli authorities are watching social media closely and targeting Palestinians.”

“We’ve noticed that in the last several months, more people are being arrested for expressing their views on social media,” Rimawi told Al Jazeera on May 23, adding that in many cases Palestinians are detained for “legitimate political expression and not incitement.”

The MADA Center reported in February that in 2019 social media companies, mostly Facebook, committed 181 violations against Palestinian content and blocked news pages and the journalists’ accounts.