Freedom of the press: Palestine's journalists call for action

Although President Mahmoud Abbas recently reiterated that freedom of the press is absolute in Palestine, the executive branch has carried on with its abuses against journalists, in a flagrant contradiction between what's being said and what's actually happening. 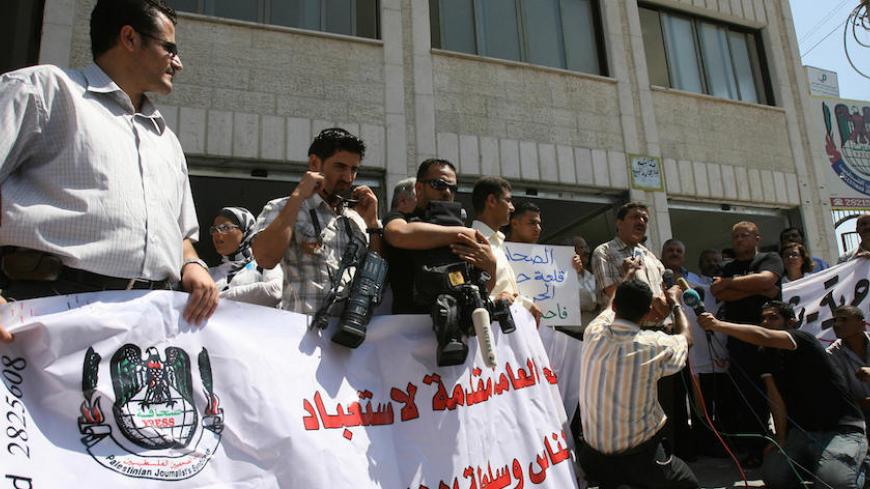 RAMALLAH, West Bank — In public, Palestinian officials seem to agree that freedom of the press is essential. Yet journalists continue to be harassed, imprisoned and subjected to violence by Palestinian security services.

On Aug. 2, Palestinian President Mahmoud Abbas was the first Arab leader to sign the Declaration on Media Freedom in the Arab World. He declared Aug. 1 of each year Freedom of Opinion and Expression Day in Palestine.

The declaration, presented by the International Federation of Journalists (IFJ) and the Palestinian Journalists Syndicate (PJS), had already been signed by representatives of more than 500 news agencies, human rights organizations, political leaders and civil society organizations. The declaration includes a clear commitment to the principles of the freedom of the press, the right to freedom of access to information and the safety of journalists, as well as a commitment to reform regulations.

In addition, the Independent Commission for Human Rights (ICHR) and PJS are preparing an official memorandum urging Abbas to approve legislative changes designed to protect journalists' acting in their professional capacities. “The memorandum, which will be submitted to the president in the coming weeks, includes demands that [Abbas] issue a quick legislative amendment stipulating that journalists should not be arrested by security services for their journalistic activity, but rather be referred to the judiciary if a complaint is filed against them,” Ammar Dweik, ICHR director general, told Al-Monitor.

The Aug. 2 declaration signing revived debate about the contradiction between public statements and actual practices.

There are currently no laws regarding the media's right to access information. Moreover, Article 19 of the Palestinian Basic Law is being violated. It stipulates, “Every person shall have the right to express his opinion and to circulate it orally, in writing or in any form of expression or art, with due consideration to the provisions of the law.” Yet security services’ abuses against journalists continue.

There were 27 violations by security services in June in the West Bank and Gaza Strip. However, that number decreased to seven in July, according to the Palestinian Center for Development and Media Freedoms (MADA). One violation that stands out was the July 26 arrest of journalist Mohammed Khabisah, economic correspondent for Anadolu Agency. The Palestinian preventive security in Ramallah raided Khabisah's house after he posted on his Facebook page figures related to the budget and expenditures of the Palestine News and Information Agency, which he copied from the official page of the Palestinian Ministry of Finance.

Violations include taking journalists into custody for investigation, detaining them and using excessive force against them during arrests. For instance, Jamil Muammar, a journalist for the Voice of Palestine in Gaza, was arrested and detained for 13 days for publishing an article.

Abbas’ signature on the declaration will test the Palestinian Authority’s (PA) ability to abide by the statement's principles and will shine a light on the results.

“Abbas gave all executive agencies strict instructions to respect the freedom of opinion and expression. [PJS] is monitoring to what extent the executive bodies will abide by those commitments, and in case violations are made, we will be standing against that," PJS head Nasser Abu Bakr told Al-Monitor.

The union will also keep track of various draft laws designed to support freedom of the press. The proposals soon will start reaching Abbas' desk for his signature, including one guaranteeing the right of access to information, which is on the Cabinet’s agenda, Abu Bakr said.

Abbas and Prime Minister Rami Hamdallah have always said that freedom of expression and opinion in Palestine is absolute and that freedom of the press is sacred. Yet security services’ practices have sometimes contradicted these statements. Speaking to Al-Monitor, Mousa Rimawi, general director of MADA, warned, “We welcome Abbas signing the declaration. Yet the signature must be accompanied by measures on the ground, which requires that executive agencies halt their violations in this regard.”

Abu Bakr said, “There cannot be talk of freedom of opinion and expression unless the laws guaranteeing these freedoms are modernized, such as the [proposed] law on the access to information, and the publications law, which needs many amendments for it to go in line with the developments of new media.”

ICHR's Dweik agreed and said, “If the political will regarding the freedom of opinion and expression is not reflected in the enactment of laws and practices on the ground, they will remain mere declarations and useless good gestures.”

Naela Khalil, who heads the West Bank operations of London-based media group Al-Araby Al-Jadeed, told Al-Monitor the PA could wind up embarrassing itself on the world stage.

In October, the PA closed the group's newspaper offices in Ramallah for weeks under the pretext of license violations, and on June 8 it called for correspondent Mohammed Abed Rabbo to be interrogated for an investigative article published in the newspaper.

“We do not need the president to sign [new laws]," Khalil said. "Rather, we want the executive agencies to halt their violations of public freedoms."