Earlier this month, Palestinian police beat several journalists as they covered a non-violent protest in Ramallah, according to news reports. This incident is just the latest in a series of cases over the past six months where Palestinian journalists, bloggers and social media activists have been targeted and jailed, reports Lena Odgaard from Ramallah. 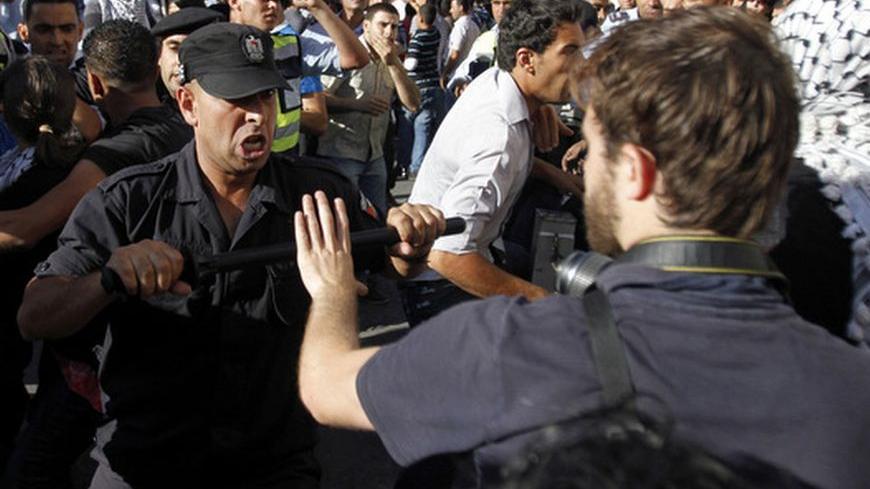 A member of the Palestinian security forces scuffles with a journalist in the West Bank city of Ramallah July 1, 2012, during a protest by Palestinians against a meeting between President Mahmoud Abbas and Israeli Vice Premier Shaul Mofaz that had been put off. - REUTERS/Mohamad Torokman
July 12, 2012

Earlier this month, Palestinian police beat several journalists as they covered a non-violent protest in Ramallah, according to news reports. This incident is just the latest in a series of cases over the past six months where Palestinian journalists have experienced a significant crackdown on attempts to criticize Mahmoud Abbas’ Palestinian Authority. The judiciary is reinterpreting laws dating back to the 1960s that criminalized defamation of officials as the basis for arrests, intimidation of journalists and blocking web sites.

Summonses, threatening phone calls, continuous interrogations, arrests and even detention for weeks on end are some of the methods the Palestinian Authority is increasingly using against journalists, bloggers and social media activists who publicly speak out against Abbas, his government, and security and police forces in the West Bank, according to media rights watchdogs. The organizations are noticing increased scrutiny of social media sites like Facebook and interrogation of people whose statements are deemed too provocative.

“Many journalists won’t write about certain cases because they think it is forbidden or they think they will be attacked,” said Moussa Rimawi, director of the Palestinian Center for Development & Media Freedoms (MADA), which is based in Ramallah. He worries that the crackdown will result in the rise of self-censorship.

In 2011, MADA saw more violations by Palestinian than Israeli authorities for the first time since the center’s launch in 2008. These were mainly physical assaults and interrogations, but also included arrests, detentions and prevention from covering certain events—a trend, which seems to have continued into 2012.

The office of Palestinian Authority’s Attorney General Ahmed al-Mughni, which is handling prosecutions of reporters, declined to comment on criticism of the PA’s treatment of journalists.

The Palestinian human rights organization Al-Haq closely followed ten cases of journalists and social media activists arrested in the spring of 2012. Dr. Isam Abdeen, a legal consultant with Al-Haq in Ramallah, said in an interview, that the new attention to online and social media is related to the revolutions that have shaken the Arab world since January 2011 and a concern that something similar could happen in Palestine.

“The fact that they are worried is seen in the questions used in the interrogations, where it is a recurrent question whether the journalists are members of ‘Herak Shababi’” Abdeen said, referring to an independent Palestinian youth movement, which sprang out of last year’s March 15 movement to end political disunity between Abbas’ Fatah party on the West Bank and the Islamist Hamas movement, which rules the Gaza Strip. Professional social media experts or members of the Palestinian Authority discover journalists’ posts by posing as “friends,” Abdeen said.

In all of the cases, the charges are of defamation and based on articles 195 and 188 in the Palestinian constitution. These were adopted from the Penal Code of 1960 — when Jordan ruled over the West Bank. Initially, the purpose of these articles was to ban any form of criticism against Jordan’s king and prohibit defamation of public officials. Before 2012, the two articles had rarely been in use. But now, they are being reinterpreted to prohibit criticism against the president or public officials with the Palestinian Authority, and those charged face a penalty of imprisonment up to three years.

As the number of journalists and social media activists’ arrests based on these laws grows, Abdeen said he fears that it could lead to a new official policy.

Many of the Facebook posts in question have included accusations of corruption against the Palestinian leadership or public officials. The Palestinian Anti-Corruption Law from 2005 states that anyone who knows of corruption is obliged to report it, but ironically, it is not the people accused of corruption who are being investigated, but those reporting it.

In January this year, Youssef Al-Shayeb, a 37-year-old Palestinian-Jordanian journalist living in Ramallah, exposed corruption within the Palestinian Diplomatic Mission in France and the Palestinian Foreign Ministry. Initially convinced that the story would be met with praise from both society and the top leadership, he did not anticipate the reaction it met.

Al-Shayeb was fired from his job with the Jordanian newspaper Al Ghad, which had originally encouraged and published the article. In March 2012 he was taken to court and charged with defamation. The prosecutor requested he be sent to jail while the case was investigated and Al-Shayeb spent eight days in prison, six of them in solitary confinement. It was only until his case received significant pressure from Palestinian and international human rights organizations and attention from international press that he was released on bail. In an interview in Ramallah, Al-Shayeb said that he felt like he was going through the same as Palestinians held in administrative detention in Israeli prisons.

“You are in jail without a court order and you cannot understand why you are there,” said Al-Shayeb who expressed his surprise at the increased limitations in media freedoms. “This suddenly happened after the Arab revolutions. Before we had a large degree of journalistic freedom but since the beginning of the year, web sites are being closed and journalists are taken to jail because of comments or just liking a comment on Facebook. What is happening here now is what has happened in other Arab countries for 30 years. What is happening now is what made people make revolutions.”

In April 2102 — the peak of harassment cases against journalists — Minister of Telecommunication and Information Technology, Mashhour Abudaka, resigned in protest of a decision by the PA attorney general to block at least eight websites critical of Mahmoud Abbas. Abudaka said that when he confronted the office of the Secret Service, which was enforcing the attorney general’s decision, he was told that the purpose of the move was to “protect the president.”

“We have a saying that in time of danger a cat eats its kittens. That is what is happening here. We have a leadership, which is vulnerable — the Palestinian society as a whole is vulnerable to Israel’s continuous attacks. But criticizing our internal situation and being open about it is the best solution,” said Abudaka.

Abudaka’s resignation brought attention and pressure from international press freedom organizations and government officials, including the EU and the White House. This led Abbas to release a public statement in May in which he ordered the sites unblocked and promised to protect freedom of expression.

“If you speak up, you become a traitor. But I think that decisions to arrest journalists or block web sites without any legal reference causes the most damage, because people are trying to find freedom under occupation and then somebody tries to shut us up,” said Abudaka.

So far, none of the defamation cases against journalists or social media activists have faced their final ruling. Still, the human rights organization Al Haq has seen cases where the accused journalists and social media activists spend days or weeks in jail based on the security forces’ claim to be investigating the case. According to Palestinian law, the public prosecutor can detain people for up to 15 days with the option to extend the detention an indefinite number of times while the case is being investigated. As an example, Al Haq’s Abdeen pointed to the case of Jamal Abu Raihan, a Palestinian blogger and co-founder of the Facebook page “The people want an end to corruption” who spent 35 days in jail after posting a satirical cartoon of President Abbas as a donkey.

“These are violations of human rights and I feel that it does not serve a purpose of investigation, but is punishment,” said Abdeen. He continued: “We are at a junction and Palestinian politicians need to decide whether we want to become a police state or promote human rights and further freedom of speech.”