Israel’s military raids on the West Bank following the kidnapping and murder of three Israeli teenagers have included violations against Palestinian journalists and media outlets. 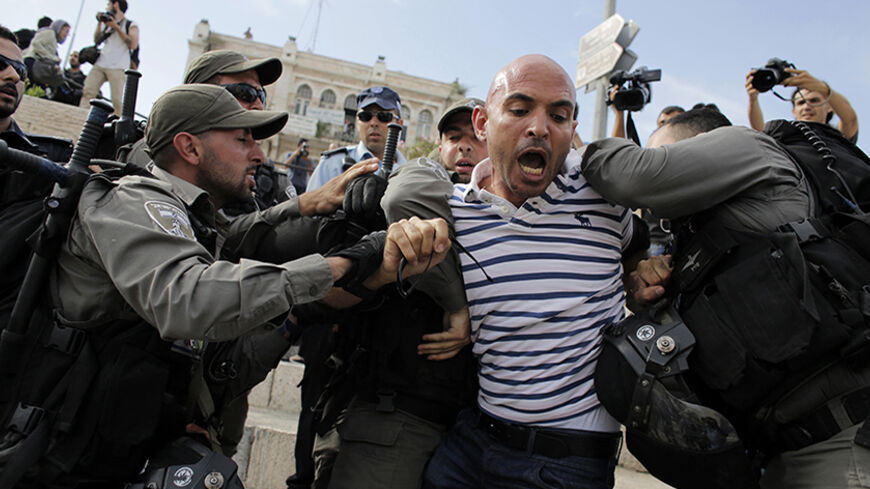 Israeli border policemen detain a member of the media during a protest against a parade by Israelis marking Jerusalem Day, at Damascus Gate in Jerusalem's Old City, May 28, 2014. - REUTERS/Ammar Awad

RAMALLAH, West Bank — The “press” badge did not protect Yahya Habayeb, a journalist with the Ajyal radio network in the West Bank, from an assault by Israeli soldiers while he was covering the military operation in Hebron, nor did it protect him from arrest. He was bruised and his camera and recorder were broken.

This was only one of many attacks by Israeli soldiers on Palestinian journalists during the military operation in the West Bank, which started on June 13, culminating in the storming of Trans Media on June 18, Pal Media on June 21 and Turbo Design on June 22.

Habayeb told Al-Monitor that Israeli soldiers arrested him while he was covering the raid on Aqaba Tufuh, west of Hebron. They took him away and broke his camera, cell phone, recording device, and they beat him, causing bruises on his body.

In a news report, the Palestinian Center for Development and Media Freedoms (MADA) said that the media was one of the targets of the military operation in the West Bank, as also reported by the Union of Palestinian Radio and Television.

MADA Director Mussa al-Rimawi told Al-Monitor that Israel “is acting as a state above the law, thus requiring the Palestinians to head to international bodies, especially after the accession of Palestine to the United Nations.”

About the steps he will take after the attack, Habayeb told Al-Monitor that in the coming days he would file, via Palestinian institutions, a lawsuit with the Israeli High Court of Justice against the Israeli army.

For his part, Omar Nazzal, a member of the general secretariat of the Palestinian Journalists Syndicate, told Al-Monitor over the phone that the union’s role in protecting journalists “remains in the traditional framework of organizing an internal protest or by communicating with international institutions and bodies, particularly the International Federation of Journalists.”

With regard to not submitting complaints to international courts against Israeli violations, Nazzal said, “It is difficult because Palestine has not joined the International Criminal Court [ICC], something we have been calling for since [Palestine] gained observer status at the United Nations. The matters requires a political decision.”

In the same context, the undersecretary of the Ministry of Information, Mahmoud Khalifa, said during a press sit-in in front of the headquarters of Trans Media in Ramallah on June 19, an event attended by Al-Monitor, that by targeting journalists and media organizations the occupation army is “proving that it and its state are above international law. That requires calling all international and UN organizations as well as journalists unions to play their role in protecting Palestinian journalists and media institutions.”

For his part, Freedoms Committee in the Palestinian Journalists Syndicate head Mohammad al-Lahham said during the sit-in, “Journalists are being systematically targeted and there’s no response at the official Palestinian and Arab levels.”

During the same sit-in, Trans Media Director Marwa Jabara said, “If the company continues to work as an independent media outlet that is not affiliated with anyone and [continues to] provide news services, it would be the best response [to the aggressions].”

According to Jabara, there was an Israeli army decision to “close [Trans Media] until Dec. 31, 2014, under the pretext of broadcasting inflammatory material.”

During the protest, Al-Monitor met with Al-Aqsa TV correspondent Suhaib al-Asa, who was arrested by the Israeli army at dawn on June 22 in his home in Bethlehem. “The decision of the occupation regarding Trans Media, which provides information services to Al-Aqsa, prevents us from working, makes us pursued by a military order from the occupation army and exposes us to arrest and trial,” Asa said.

Salah Ziad, a photographer with Pal Media, told Al-Monitor via phone that the Israeli army “does not treat us as journalists, mocks Palestinian and Arab media, uses force against us and takes us for granted.”

Israeli soldiers detained Ziad and his car in Aaroura village, north of Ramallah, at dawn June 20, while he was covering the raid on the home of Hamas leader Saleh al-Arouri. The soldiers pushed Ziad with their rifle butts, assaulted him, tried to break his camera and confiscated his identity card, according to what he told Al-Monitor.

Salah believes that the response to the Israeli attacks should be to “prevent the entry of Israeli journalists to the Palestinian territories and for the Palestinian Authority [PA] to raise the issue of the attacks with the occupier’s authority.”

He called for “delivering a message and raising an international issue about the attacks, and raising the issue with the PA, which should deliver a message as part of the security coordination that Palestinian journalists must not be touched.”

In this context, Al-Monitor has learned that the Union of Palestinian Radio and Television, which is part of the 220-member Union of Islamic Broadcasting, has compiled files on many clear crimes, such as murder, committed by Israel in the Gaza Strip and is waiting for the right moment to submit them to international courts.

The head of the union, Salah al-Masri, told Al-Monitor that all institutions should “collect and prepare files to document them at the right moment when we go to the international tribunal to put an end to these crimes.”

It seems that the demand by journalists to go to the ICC is facing difficulties because Palestine has not yet joined.

Issam al-Aruri, director of the Jerusalem Center for Legal Aid, told Al-Monitor, “Legally we cannot go to the international courts to prosecute Israel because the [PA] did not submit a request to join these courts.”

About the means that Palestinian journalists can resort to in order to reduce attacks by the occupation, Aruri said, “The legal means are very limited. The Israeli judiciary is known to be affiliated with the [political leadership]. … But mass media campaigns can be organized, as well as building international alliances with international institutions and bodies, and sending documented reports to international human rights organizations, which could put pressure on Israel, in addition to pressuring the [PA] to treat Israeli journalists in-kind, if the work of Palestinian journalists is impeded and if [the Israelis] are prevented them from working.”