Palestinian reconciliation is futile if freedom of opinion and freedom of the press are not respected, and journalists are silenced. 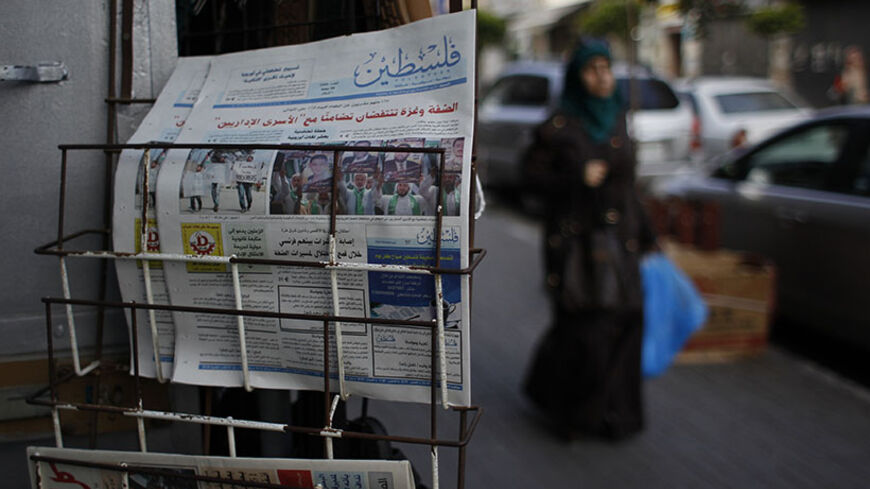 A Palestinian woman walks past copies of a pro-Hamas newspaper in Ramallah, May 10, 2014. - REUTERS/Mohamad Torokman

In less than a week, journalists have faced various levels of restrictions on carrying out their professional duties in Jerusalem, the Gaza Strip and Ramallah in three different incidents. The violators included Israelis, Palestinian unionists and Palestinian police.

In East Jerusalem, a TV interview on “Good Morning Jerusalem” — which has been airing every Friday for years — was being taped at the privately owned Pal Media studios on the Mount of Olives on June 6 when Israeli soldiers raided the studio, arrested studio director Ibrahim Qleibo, show host Mona Abu Assab and guest Ala’a Haddad, a member of the Prisoners' Council in Jerusalem. They were released a few hours later, which added to the accusation by Palestinians that the aim of the Israelis was simply to stop the airing of the interview. A report on WAFA, the official Palestinian news agency, quoted Assab as saying the Palestinian Broadcasting Corp. (PBC) network was forced to end her live show at gunpoint. Israeli spokeswoman Lubra Samri said the raid on PBC was part of "an investigation into the content of its programs.”

This particular program was discussing various efforts inside and outside Palestine to show solidarity with Jerusalem and its people. No calls for violence were uttered on the program, and Israel has not made any specific allegations about who made any inciting statements if any, and what they said.

The second incident was not as violent. The Palestinian Journalists' Syndicate in the Gaza Strip decided to question one of its own members for a report he produced for an Arab media outlet. The journalist, Mohammed Othman, who also writes for Al-Monitor, had written an article 10 weeks ago about incest and other bizarre sexual acts in the Gaza Strip. The report included the story of a bride running away and sleeping in a cemetery because her husband wanted to share her with his father. The journalist did not identify the individuals and spoke with psychologists to explain the phenomena. Othman told Al-Monitor that the syndicate complained to him that stories like that gave the Gaza Strip a negative image, and that patriotic journalists should not air Gaza’s dirty laundry.

The third incident took place in Ramallah on June 11, when the Palestinian police brutally attacked a group of journalists covering a protest by women supporting the Islamic Hamas movement. The Palestinian media freedom watchdog MADA issued a statement detailing the names and media affiliations of those beaten by the Palestinian police and called for an immediate investigation.

While there is no direct correlation between the three incidents, it is interesting to note the power of information and the various violent and nonviolent ways that Israelis and Palestinians are using to muzzle an independent media.

With the peace process in deep freeze and the local media paying attention to local issues, it is disappointing to see such viciousness being thrown at members of the news media from all sides.

The Middle East is full of major stories which the powers-that-be have little tolerance for any journalist or media outlet that is not following a certain prescribed, yet often vague party line. Even the Palestinian prisoners' hunger strike, which one would expect to have a unifying effect on Palestinians, has failed to produce the kind of traction that would result in Israel's responding to the just demands of the administratively detained. Even the words of UN Secretary-General Ban Ki-moon that the Israelis should either charge or release the prisoners had fallen on deaf ears.

The high hopes of the reconciliation and forming of the national unity government also appear to have failed to produce the self-perpetuating continuity that many had hoped for. Gaza police have reflected the anger of unpaid Hamas appointed workers, cooperating with Hamas militias to keep Gaza’s banks closed in an attempt to block Palestinian Authority staff coming from Ramallah to get their salaries.

The Palestinian Journalists' Syndicate, which was expected to be the unifying body in defense of journalists, often lags behind when it comes to defending fellow journalists. The internal conflict in Palestine between Hamas and Fatah has had its effect on the polarization of the union. Partisanship often takes precedent over professional responsibilities of defending their members, irrespective of the attack. The union issued a statement condemning the violence by the security forces in Ramallah on June 11, but it has been unable to stop these abuses.

Pitting journalists and the media against soldiers, union leaders and police is not new in Palestine or the region. But such regular occurrences against the free press, with such immunity, are a bad omen for the kind of future many are hoping for. Jerusalemites are once again being gagged for refusing to accept the Israeli unilateral annexation of the city; Gaza unionists want their journalists to focus only on the occupation and not on internal, Palestinian societal problems; and, the police in Ramallah are not used to having to respect the public demonstrations of people not aligned with their president.

Civil society in any country requires the breath of fresh air that a free press provides. Stifling the Palestinian media, whether by Israeli or Palestinian police or by locals appointing themselves as the guardians of thought and opinion, will not contribute to the Palestinian desire for an independent and free country. The challenges facing Palestinian journalists are not simple. They have to deal with both armed attackers as well as politicians on both sides trying to force their version of the media "content" on what is written or aired.