The Palestinian Broadcasting Corporation has big plans to expand in the Middle East and around the world to spread news about the Palestinian cause. 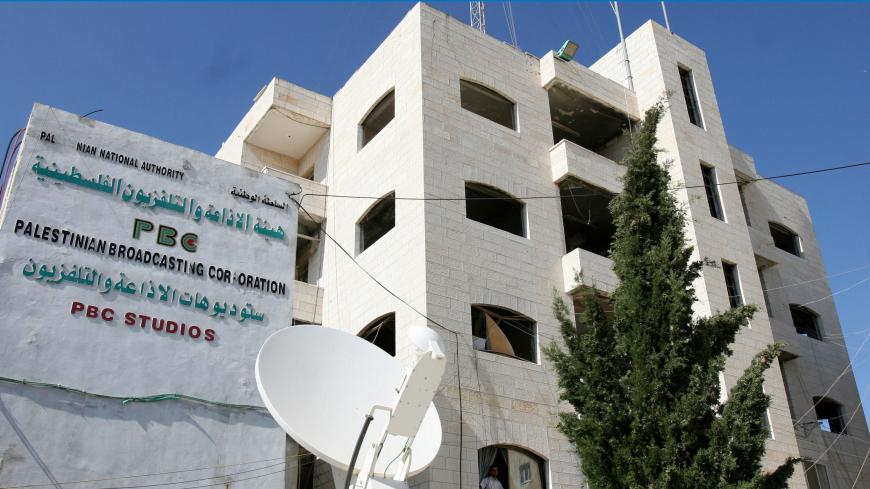 A general view of the outside of the Palestinian Broadcasting Corporation studio building in Ramallah, West Bank, June 17, 2007. - ABBAS MOMANI/AFP/Getty Images

RAMALLAH, West Bank — The Palestinian Broadcasting Corporation (PBC), which opened an office in Beirut recently, plans to add reporters and facilities globally and is upgrading existing offices. Company officials say the expansion, its biggest ever, will help convey the plight of the Palestinian people around the world.

The Beirut office is equipped with the latest technology for 24-hour media coverage and a team of journalists and technicians, PBC said. The April 16 opening is but one of many steps PBC is taking to grow the company, which is also forming partnerships and cooperation agreements with media outlets in other countries.

In November, PBC opened an office in Cairo, and it plans to open one in the Syrian capital of Damascus this year, Samah Nassar, head of the firm's foreign offices, told Al-Monitor. The company also envisages expanding its office in the Jordanian capital of Amman, which opened in January 2016.

Ramallah-based PBC wants to equip all its media offices in the different Arab countries with the latest broadcasting technologies and advanced studios, and employ professional staff. This is all scheduled to take place this year, according to Nassar. PBC has already given its sites in the West Bank a facelift, adding advanced cameras and montage film-editing equipment.

The company chose the Middle East locations, after much research and preparation, based mainly on "the size of the Palestinian presence and historical ties in and with these countries,” Nassar said.

The expansion plan abroad includes setting up a global network of reporters. “We will have 50 reporters around the world. We will begin implementing this decision in mid-May until the beginning of 2019,” Nassar said.

She added, “We will [eventually] be present in Arab countries without exception, and the most prominent European capitals such as Paris, London, Berlin, Rome and Geneva. We will also have two correspondents in Washington and New York, Canada, Japan, Russia and some South American countries, including Brazil and Venezuela."

In addition, PBC expects to launch a new channel, Al-Akhbaria, at the beginning of next year. PBC's other channels include Palestine TV, Musawa Channel, Palestine Sports TV, Palestine Live TV and Voice of Palestine Radio.

The company is also promoting local and international agreements for exchanging media content and expertise. Last year it signed such a pact in June with Ecuador's state television and with Turkey's TRT TV in October. This year, it signed a cooperation agreement in January with Algeria. In February, PBC worked out an arrangement with the Russia Today network, part of Russia's state-owned news agency Sputnik.

Sputnik quoted its deputy editor-in-chief, Sergei Kochetkov, as saying the pact "is an important stage not only in the development of Sputnik partners' network in the Middle East, but also in the cultural cooperation between Russia and Palestine."

Nassar said PBC's expansion in Arab countries "aims to shed light on the economic and social concerns, as well as the living conditions, of the Palestinians in these countries and to keep abreast of domestic issues there."

She noted, "These countries are considered brotherly states to Palestine that affect and are affected by it, as they are supportive of the Palestinian issue in all international forums, mainly at the United Nations and the [UN] Security Council."

In the past few years, the Arab media has shifted a great deal of its attention away from Palestinian news, given the major regional developments such as the sweeping Arab Spring revolutions in countries such as Egypt, and the wars in Syria, Libya and Yemen.

“The decline of the Arab media focus on Palestine prompted us to uphold and promote our cause and tell our narrative and national vision to the world,” Nassar said.

PBC was established in 1993 and is seen as the Palestinian Authority's (PA) official media representative, adopting the same rhetoric as the PA and its Fatah nationalist political party, and financially relying on the Palestinian government budget. PBC also has received some support from the PLO’s Palestinian National Fund to set up the offices in Lebanon and Syria.

Nassar said PBC welcomes opinions on content and coverage. “Three years ago, we began to hold meetings and organize workshops and brainstorming sessions in Palestine and abroad, with the participation of PBC general supervisor Ahmed Assaf … and other PBC officials to develop our media content and policy. This is done with PBC partners in the Journalists Syndicate, Birzeit University Media Center, An-Najah National University, Hebron University as well as Al-Quds Open University, not to mention ongoing consultations with Palestinian academics and experts to this effect,” Nassar said.

Nabal Thawabet, director of the Center of Media Development at Birzeit University, told Al-Monitor the partnership between the center and PBC dates back to 1996. Since then, the center has held several media training sessions for PBC staff, in a bid to boost content and quality.