Theater on wheels to reach Palestinian children in isolated areas

The Palestinian Broadcasting Corporation launches a mobile theater to reach children who have never seen a show before. 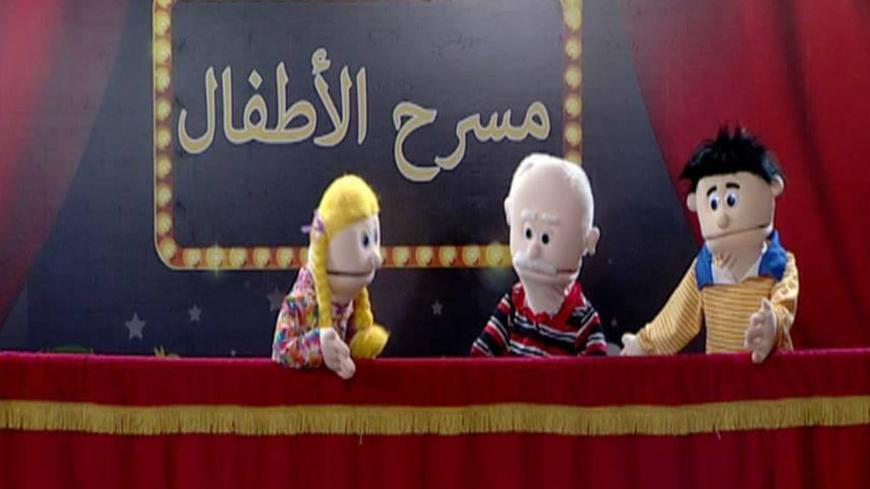 A puppet show takes place at the inauguration of a mobile theater that will tour inaccessible parts of the West Bank. Picture uploaded Nov. 14, 2017. - Facebook/PalestineTv

RAMALLAH, West Bank — A theater on wheels will bring theater, puppet and dance shows to underprivileged Palestinian children in refugee camps and marginalized areas by next spring.

The children's programs department of the Palestinian Broadcasting Corporation (PBC) inaugurated the mobile children’s theater on Nov. 14. This theater is considered the first of its kind in Palestine as it will offer diverse shows to children in marginalized and rural areas in Area C and regions that have been isolated from their surroundings because of the settlements and the wall, such as al-Aghwar area and the Bedouin communities.

The theater activities, which will combine entertainment with educational messages, are expected to start by March 2018.

The director of the children’s programs department and presenter of the PBC children’s program “Bait Beyoot,” Walaa al-Battat, told Al-Monitor, “Launching a mobile children’s theater reflects the PBC’s interest in our children amid the exceptional circumstances they face and the violation of their rights at the hands of the occupation, especially in marginalized areas.”

He said, “The aim of the theater is to spread joy and fun through the shows that also contain educational, social and cultural messages,” adding that the shows will be an interactive experience, rather than “traditional education in schools that is based on memorization.”

The theater will aim to reach marginalized areas such as the refugee camps and the Jordan Valley, where children do not have access to entertaining educational shows as there are no cultural centers or entertainment spaces for children. These areas often lack basic services such as electricity, so that children's TV shows are unavailable.

“The focus will be on marginalized areas such as the Jordan Valley and the refugee camps, which are in dire need of spaces where children can have fun, be entertained and learn through new methods,” Battat added.

The PBC’s children’s programs department presents puppet shows, plays, storytelling and dance performances on TV, but this will be their first attempt at organizing a theater on wheels for children. The project was welcomed by the PBC director, and the broadcasting corporation bought all necessary equipment.

“The general supervisor of the PBC, Ahmed Assaf, welcomed the idea of establishing a mobile theater and ensured support for all projects that would contribute to changing the situation of children. We started by contacting the biggest companies that sell theater equipment, and we now have a mobile theater with excellent capabilities and practical equipment of high technological and quality standards,” Battat said.

According to Battat, the children’s programs department will produce and present the shows. But in the future, the department hopes the theater will allow children to join the team and take part in the shows after developing the necessary skills. The opening ceremony Nov. 14 included the participation of a group of youth ages 14-16 who “worked with the team” so they could learn to dance and sing as part of a group.

Battat noted that the theater would like to collaborate with other institutions that work with children.

The theater shows are inspired by famous plays that have been adapted for the children in line with the educational messages that Battat and his team, who wrote some of the plays, intend to deliver.

“Plays written by the department aim at promoting values and goodness and how to defeat evil,” he said.

One of the reasons that the PBC adopted this project was its desire to touch the lives of children beyond the impact one TV show could have, according to Battat. “We also hope to make a difference in the lives of the thousands of Palestinian children who are deprived of free entertainment.”

Nizar al-Ghoul, the head of programs at the PBC, told Al-Monitor that the establishment of the mobile theater is part of the strategic objectives of the PBC, particularly in its aim of reaching out more to women and children.

“The focus of the [new] vision will be socially marginalized groups such as women, children and people with special needs,” he said.

According to Ghoul, women’s issues as well as children’s education and the needs of the disabled would not only be addressed in special programs but would be integrated into the content of “all programs — even talk shows and political shows.”

He concluded that the mobile theater would not only contribute to finding and developing the theatrical talents of children, but it would open a window of joy and entertainment for underprivileged Palestinian children.