The Red Carpet Human Rights Film Festival in Gaza City aims to revive closed film theaters, but there is little progress on the ground. 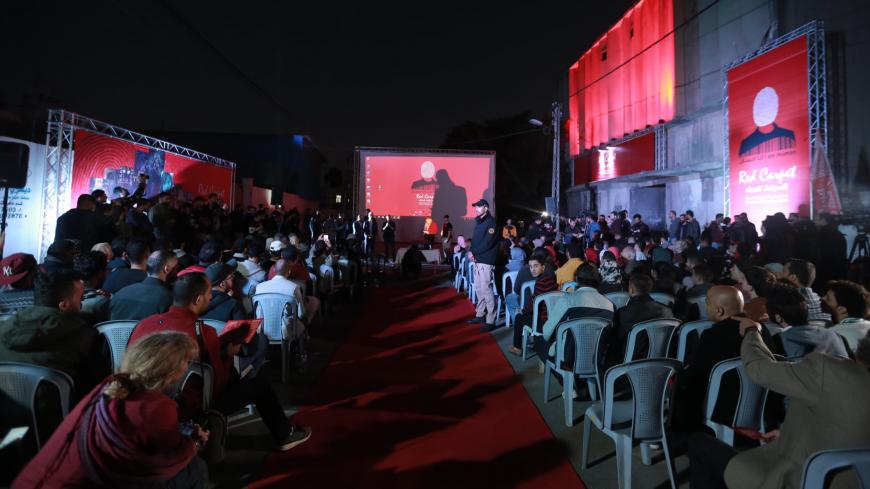 The voice of one of the organizers of the Red Carpet Human Rights Film Festival announced the start of a film at the festival that took place on Dec. 4-11. But it was the film theater, Amer Cinema, that stole the spotlight, rather than the films shown. The cinema was supposed to open for the first time since 1996, when a group of young men set it on fire because they claimed it showed indecent films.

Days before the festival started volunteers worked hard to get the film theater ready. The initial plan was to hold the screenings at the theater, but the owners reversed the decision and insisted on holding the opening in front of the theater instead.

"They told us that they had security concerns," Muntaser al-Sabaa, executive director of the Red Carpet film festival, told Al-Monitor. He said that the fact the theater decided to show films outside the building drew just as much attention to Gaza's closed cinemas as the anticipated reopening of Amer Cinema after 23 years.

The Gaza Strip is home to 10 film theaters, all of which have been closed since 1987, when the first Palestinian intifada started and resulted in an unstable security situation. There have been brief attempts to reopen the theaters in the 1990s and later in the 2010s, but for the most part they have remained closed.

As a demonstration of their eagerness for films, hundreds of Palestinians, most of them young people, attended the 5th edition of the Red Carpet Human Rights Film Festival. On the first day of the festival, crowds gathered in front of the cinema to watch the opening film — “Gaza,” the submission of Ireland for the Academy Awards 2020 — outside the cinema on a giant screen. The film focuses on the tough humanitarian situation of Gaza residents due to the Israeli blockade and shows the obstructed ambitions of many Gazans who want to travel, work and live in peace.

Sabaa said that 300 films were submitted, from which the festival committee chose 45 films — Palestinian, Arab and international productions — to be screened in Palestinian cities in the West Bank and the Gaza Strip.

The festival’s slogan — “Ana Insan” ("I am Human") — is in line with the Universal Declaration of Human Rights ratified by the United Nations on Dec. 10, 1948. The organizers wanted to tell the world that there are 2 million people in the Gaza Strip who live in tough conditions due to the 13-year-old Israeli blockade.

Fadi Hanouna, who directed “Gaza,” told Al-Monitor that the film took five years to complete, between July 2014 and early 2019. The festival marked the first time it was screened in Gaza.

Youssef al-Mzeini, 38, who attended the festival, told Al-Monitor, “I have been wanting to go to a cinema to watch a film for years. But the closing of film theaters in the Gaza Strip prevented me from doing so. As soon as I saw the advertisement for the festival and found out that screenings would take place in front of the film theater, I decided to show up.”

Fadwa al-Sabbagh, a 45-year-old cinema lover, told Al-Monitor she remembered Amer Cinema in the 1990s. “I would frequent the cinema in 1995 and 1996 once a month. I had just gotten married and my husband and I both enjoyed going to the movies,” she said.

But some of the filmgoers expressed disappointment that they were not able to watch the film inside the cinema. The Ministry of Culture said that the opening of the theater could have been possible if the owners had not decided to the contrary.

“We facilitated holding the Red Carpet festival at Amer Cinema,” Undersecretary of the Ministry of Culture in Gaza Anwar al-Baraawi told Al-Monitor. "Owners of film theaters decide whether they want to open them or not; the theaters are private and not public property."

Yousri al-Ghoul, a Palestinian writer, told Al-Monitor that he blames civil and governmental groups for the continuing closure of cinemas in the Gaza Strip. He noted that some social groups need to rectify their misconceptions about film theaters and take measures to support them.