Children and residents from the Shajaiyah neighborhood in Gaza, which suffered mass destruction and massacres during the 2014 war, attended the Karama Human Rights Film Festival, featuring poignant movies about the tragedies. 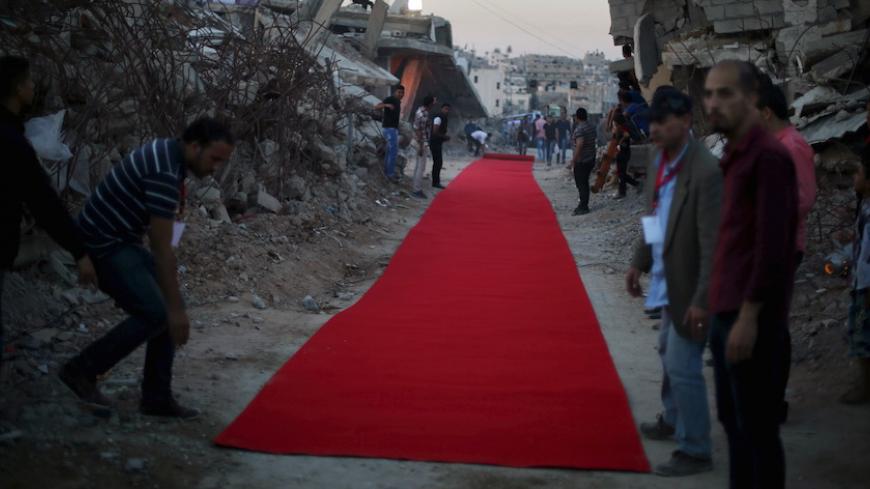 Palestinians place a red carpet between the ruins of houses, that witnesses said were destroyed by Israeli shelling during a 50-day war last summer, before they display a film on the war in the east of Gaza City, May 12, 2015. - REUTERS/Mohammed Salem

GAZA CITY, Gaza Strip — It was not Jack Nicholson, Johnny Depp, Brad Pitt nor Angelina Jolie who walked down the red carpet at the Karama Human Rights Film Festival, but Fatima al-Jaabari and children Ahmed al-Rai, Mohammed Abu Shamali and Salsabel Abu Shanab, as well as hundreds of other stars from the Gaza Strip, specifically the Shajaiyah neighborhood.

In his interview with Al-Monitor, the festival's director, movie director Khalil al-Muzayen, said he'd insisted that the opening be held in the Shajaiyah neighborhood, which was destroyed in the recent war on the Gaza Strip that raged from July 8 to Aug. 26, 2014.

Muzayen spread out the 60-meter (197-feet) red carpet between the rubble of destroyed houses, which formed part of the backdrop to the festival. He did not set up a giant stage or place a golden ribbon to be cut; he simply spread out the red carpet as a sign of the three-day festival's opening on May 12.

As the red carpet unrolled, patriotic songs played and dozens of children gathered. The festival opened among the ruins in al-Kurba, the most afflicted area of the Shajaiyah neighborhood, near al-Tawfeeq mosque.

Muzayen told Al-Monitor, “We wanted to hold the film festival in the Shajaiyah neighborhood to draw the world's attention to neighborhoods devastated by the war and which have yet to be reconstructed. We wanted this event to be very special and to tackle human rights issues to the fullest extent. This is why we organized the festival in Shajaiyah.”

Jaabari, 75, walked the red carpet wearing her house shoes on the opening day. She told Al-Monitor, “The last time I saw a movie in the cinema was 50 years ago in central Gaza City with my husband, and it was a film featuring Lebanese actress Sabah.”

She added, smiling, “Fifty years witnessed two intifadas and three wars. Now I'm watching a movie for the second time in my life and I'm walking on the red carpet for the first time.” She pointed to her home near the festival venue, whose walls are pocked with holes caused by Israeli artillery shells.

The Shajaiyah residents in attendance seemed surprised and happy, but their happiness was incomplete. Abu Shanab, 16, asked in a serious tone, “Do I walk with my shoes on or do I have to take them off?” The people around him laughed as they kept walking on the red carpet. The first to walk in was citizen Jalal Helo, 58, who lost 11 members of his family on July 20.

Helo told Al-Monitor, “It is a beautiful experience and today, this event is held in the Shajaiyah neighborhood, which is a symbol of destruction caused by the war.” He shared his happiness of meeting with the neighbors and residents as a kind of compensation for what he lost, even if for a few moments.

The residents walked down the carpet leading to another square full of plastic chairs facing the ruins of one of the houses that were destroyed by Israeli tank shells and covered by a white sheet.

As he stood over the rubble of his house looking at the people passing in front of him on the red carpet, Nidal al-Arir asked out loud, “What is the reason for the festival? What are the cameras for? Why all these lies? No one cares about us. … Festivals and press actions are useless. Where are the reconstruction works? Where are the compensations?”

Arir’s shouts and objections were silenced by the loudspeakers when the first movie screening started. The children gathered around the ruins facing the screen, and others sat in chairs in complete silence. The power and elegance of cinema amid destruction were amazing, this paradox between the desperation of a region lacking reconstruction and the vivacious colors of the big screen.

Orphan Iman al-Jaabari, 11, told Al-Monitor, “I'm happy to watch something on the big screen. I wish they did that every day.”

The opening film from Gaza, "Awtar Maktouaa" (Broken Strings), by director Ahmad Hassouna, depicted the effects of the recent war on the lives and dreams of four children who play music on different instruments: the flute, violin, oud and the qanun.

Abu Chanab, 11, mimicked the expressions of the children in the movie, while sitting on a chair in front of the screen. She said aloud, as if answering the film’s heroes, “I'm also afraid of the sound of thunder and I mistake it for shelling." She told Al-Monitor’s correspondent, who was sitting next to her, “I'm afraid. I don't want to watch movies about the war. I wish they had shown Tom and Jerry instead.”

The first day of the festival ended with “Beit Tarki’” ("Patchwork House"), from the West Bank by Gaza director Hazem Alagha. This movie is about a Palestinian woman from Jerusalem named Janeen, who was forced to work as a cleaning lady after the deaths of her son and husband.

When Janeen visits one of her work sites in Jerusalem, she discovers that the house is owned by Israelis. Instead of cleaning it, she removes all the slogans and photos hung on the walls. Instead, she hangs pictures and patchworks she finds hidden in garbage bags. They belonged to the Palestinian family that lived in the house before the Israeli family occupied it.

The festival moved on from Shajaiyah to Mishal Theater in Gaza City, where it screened touching movies that have won Arab and international awards. These include "Roshmia," "The Wanted 18," "I’m Human," "Baghdad-Messi" and the Tunisian "Sabbat al-Eid."

The 20 movies shown during the three-day festival were generally marked by tragedy, death, wars and action, stirring objections by many people. One young woman, Mira al-Baba, told Al-Monitor, “I reproach the organizers of the festival because the movies were mostly violent. But at the same time, the festival showed strong and deep Palestinian movies.”

In response to Baba's comments, Muzayen answered, “Most human rights movies come from regions of conflict and tackle wars and tragedies. But we should be attentive to the message that each movie has to give.”

When the organizers removed the red carpet and white screen from Shajaiyah, the ruins stayed. But so did some new images in the minds of Jaabari and the children, and perhaps the festival has replaced some of the painful memories of war.