Gaza rolls out the red carpet for film festival

The second edition of the Red Carpet Film Festival in the Gaza Strip did not receive as much attention as last year, as security members insisted on keeping the lights on during the film screenings. 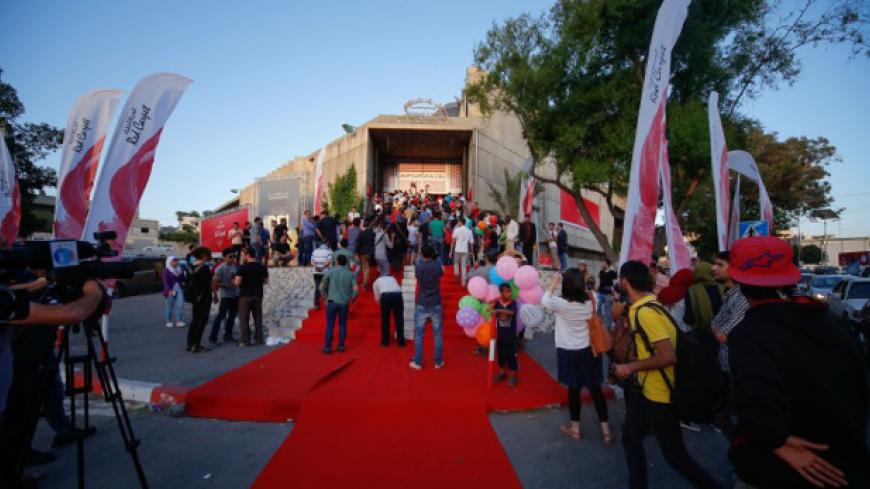 Crowds gather around the entrance of the Red Carpet Film Festival in Gaza City, May 12, 2016. - Motaz Alaaraj

GAZA CITY, Gaza Strip — “Turn them off? Off?” asked an employee of the Rashad Shawa Cultural Center in Gaza City repeatedly as he talked on his cellphone. Once he received a clear answer from the director of the center, he headed to the small control room at the far end of the hall teeming with more than 1,000 attendees, who sat on chairs, lay on the floor or stood leaning against the walls. This was the moment the debate started — should the lights be turned off or not?

On May 12, the second annual Red Carpet Film Festival opened with a screening of the film “Ya Tayr El Tayer” ("The Idol"), a biopic about Gazan singer Mohammed Assaf, the winner of the TV show "Arab Idol" in 2013. It was the film's premiere in the Gaza Strip.

Half an hour after the film started, the audience clapped as the theater employee turned off the main lights that had prevented them from clearly seeing the screen. But the cheering was short-lived as the same employee turned the lights back on 10 minutes later.

Al-Monitor had overheard the employee’s telephone conversation and asked him why he turned the lights back on despite having received authorization to turn them off. He replied, “It wasn't me, it was the security services. Yes, the center’s director authorized that, but the security officers do not want complete darkness,” as he pointed to the security services’ official, a 20-something man in civilian clothes who is affiliated with the Interior Ministry.

Al-Monitor approached the officer, but he refused to make a statement. He only said, “I told them they could dim the lights but not turn them off completely. No theater in Gaza can be completely dark during the screening of a film to avoid immoral acts happening in the dark.”

In addition to the discussion about turning off the lights in the theater, which was later repeated in the presence of other journalists, the film's screening was affected also by the generator’s lack of power causing the quality of the sound to be inadequate.

Undersecretary of the Ministry of Culture Atef Ascol stressed the importance of placing trust in the audience. He said that his ministry is willing to provide a proper venue for a true cultural experience that promotes values and moral behavior. He praised the festival for bringing the Gaza Strip to the media's attention. “Even the Interior Ministry in Gaza must appreciate these events and the audiences that attend them. There is no need for such stringent control,” he told Al-Monitor.

Festival and film director Khalil al-Mozayen told Al-Monitor, “Lighting was not the first problem that we faced with the Interior Ministry in Gaza. At approximately 8:45 a.m. on the festival’s opening day on May 12 I received a phone call from someone who did not identify himself and who said he was a police detective.”

It is worth noting that anonymous phone calls are common in the Gaza Strip in the investigation of incidents or events. The Ministry of Interior, as well as all other ministries and municipalities in Gaza, are led by Hamas; the consensus government does not have any real power on the ground.

Mozayen added, “I met with them [the police] and they asked me to sign a document that forbid the intermingling between males and females during the festival — a notion that I strongly resisted. Many families were going to attend the screening of the opening film and separating the sexes would be extremely difficult.”

Ascol denied any knowledge about the document and said, “I only know that certain special arrangements were made between Mozayen and the authorities [security services led by Hamas] that supervise the venue.”

The Red Carpet Film Festival is held a day before the opening of the Cannes Film Festival, as a message to the world that Gaza also has its own film festival despite the siege and all the wars that have plagued the Gaza Strip. Last year, this message garnered a great deal of attention when the festival was launched outdoors in the Shujaiyah neighborhood that was destroyed by Israel in the 2014 war.

This year, however, the opening of the film festival, which Mozayen and his team had wanted to organize at Gaza's port, received limited media attention. Instead, it took place at an indoor venue under strict surveillance. Mozayen said, “From the start, we tried to get authorization from the authorities [Hamas] in Gaza to hold the festival at the port, but the authorities did not allow this.” The authorities asked Mozayen to choose an indoor venue, and so the opening film was screened at the Rashad Shawa Cultural Center.

Nevertheless, the red carpet event attracted a lot of attention from the hundreds of people who attended the opening ceremony that was titled “We want to breathe.” Surrounded by journalists, Mozayen laid down the carpet with his own hands and walked down its length as the audience looked on. The carpet extended beyond the entrance stairs, all the way to the other side of the street, where dozens of cars came to a halt, horns blazing as people peered through the car windows.

Khan Yunis residents Ibrahim and Ismail Abu el-Nemr looked on and took photos. Ibrahim told Al-Monitor, “I saw people walking the red carpet, so we decided to do the same and take some pictures.” His cousin smiled and said, “We heard that there was a film about Mohammed Assaf, which we intend to watch as the invitation is open to all.”

The red color of the carpet also attracted coffee vendor Mohamad Khalifeh. “I was fascinated by the joy of the people and the cameras everywhere. Only the scent of coffee was missing from this perfect spot,” he told Al-Monitor.

The opening ceremony began with a piece played on the piano by Sarah Akl, 16, who attends the Edward Said National Conservatory of Music, followed by a number of welcome speeches and the screening of "The Idol."

Despite the audience being glued to the screen, the story was not realistic in its depiction of the Gaza Strip as a place filled with mountain peaks and with Assaf working during his childhood in the Egyptian town of el-Arish, using tunnels to cross the border that did not exist at the time. The audience did not seem to mind and cheered when Assaf won "Arab Idol," as if it was the real event.

On the second day of the festival, during which 30 Arab and foreign films dealing with the subject of human rights were screened, the viewing of films in the Rashad Shawa auditorium was delayed for close to an hour due to the security officers’ insistence that lights be kept on once again.

Following negotiations with the security officials, Mozayen and his team installed two faint orange spotlights that illuminated the center and far end of the theater, as an alternative to the more powerful white-colored lights. The screening of Mai Masri’s film “Three Thousand Nights,” which depicts the lives of female Palestinian prisoners in Israeli jails, was warmly received once the lighting issue had been resolved.

After negotiations between the festival organizers and the security officials, the festival moved to al-Mishal Theater for the final two days of the film screenings. Here, the lights were allowed to be completely dimmed in exchange for total segregation between the sexes.