The divided Palestinian media has toned down its factional rhetoric in line with the reconciliation deal, but doubts remain about whether the new cordial atmosphere will stick. 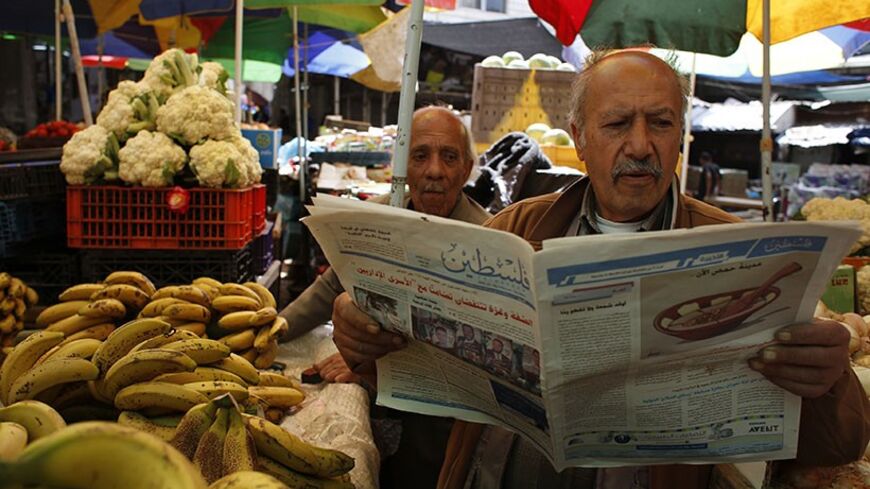 A Palestinian man selling fruits and vegetables reads a copy of a pro-Hamas newspaper, Palestine, at a market in Ramallah, May 10, 2014. - REUTERS/Mohamad Torokman

GAZA CITY, Gaza Strip — The future of Palestinian media seems ambiguous now that the unity government is to assume power in the Gaza Strip. New media outlets set up by the Hamas government have emerged amid bias on the part of most local media outlets to the political factions that fund or support them.

The official and partisan media outlets that are affiliated with the two political adversaries, Hamas and Fatah, have changed their discourse with each other upon the signing of the reconciliation, and have started hosting figures from the opposing camp in their news programs and talk shows. Moreover, the two governments have allowed the newspapers printed in Jerusalem and Ramallah to be distributed in the Gaza Strip, and the newspapers published in Gaza to be printed and distributed in the cities of the West Bank.

Although Palestinians are optimistic that allowing the distribution of newspapers will make a difference in the tone that had been adopted by the media outlets toward the conflict between Hamas and Fatah over the course of seven years, there are fears among many specialists who believe that this change is just formal, not actual.

Hassan Jabr, a correspondent for the Palestinian Al-Ayyam newspaper in Gaza, expressed fear that this change could merely be a temporary result of the current political cohesion between Hamas and Fatah. As soon as the differences between the two reappear, their affiliated media outlets might reflect that, he said.

“The currently prevailing calm in all the Palestinian media outlets affiliated with a certain party is the result of a desire on the part of the two adversaries to calm the atmosphere and not go into details that may negatively affect the atmosphere of reconciliation and agreement between them,” he told Al-Monitor. "In the absence of unity within the Palestinian journalist body — due to the split plaguing the main journalistic institution, namely the Palestinian Journalists Syndicate — no real change can take place at the level of media discourse and no influence can be made on the media outlets. Add to this the urgent need to promote an atmosphere of freedom of opinion and expression and to stop violations against journalists, both in the Gaza Strip and the West Bank.”

The Palestinian Journalists Syndicate reopened its headquarters in Gaza City on May 14 after being closed for nearly four years when the two journalistic coalitions of Hamas and Islamic Jihad took control of the headquarters in Gaza in October 2010. The Hamas government prohibited the syndicate board from holding any activities in the Gaza Strip, as it deemed it an illegitimate body and formed a separate board of journalists in Gaza belonging to Hamas and Islamic Jihad. However, this board was dissolved at a later stage because of internal disputes.

Palestinian journalists not belonging to the largest two blocs in the syndicate, Hamas and Fatah, believe that the reopening of the syndicate headquarters in Gaza is a positive step. But they believe that such a step is not a substitute for an internal reconciliation in the journalist body, one that would lead to holding free and fair elections in the West Bank and the Gaza Strip to have a new board.

“There is a need to hold professional elections for the syndicate after the formation of an independent commission to manage the latter, resolve the existing differences, add new members to the general assembly and re-evaluate the old members. This will lead to a professional and legitimate syndicate,” said Jabr.

Over the years of division, several initiatives have been made on the part of independent journalists, civil institutions and journalistic blocs, but they all failed due to the intransigence of the decision-makers in the syndicate blocs of Hamas and Fatah, and the unwillingness of politicians to restore the unity of the press body.

Speaking to Al-Monitor by phone, Nasser said: “There was fear among the members of the syndicate's board of directors in Gaza about the reopening of the headquarters during the past years, but after the signing of the reconciliation agreement, I gave instructions to reopen the office and have its activities resumed.” He added: "In the next two weeks, I am going to visit Gaza City, and I will hold personal — not political — meetings with reporters and start a serious discussion with them to reach a solution to the current syndicate crisis and unify the body, both in the Gaza Strip and the West Bank."

However, Imad al-Efranji, a reporter and the director of the pro-Hamas Quds TV office in Gaza, told Al-Monitor that the reopening of the headquarters in the Gaza Strip imposed a fait accompli. “This was a unilateral step taken by the board of directors of the illegitimate syndicate,” he said. "This board was a topic of dispute between journalists, as Gaza journalists did not participate in the [board's] elections. Thus, it would have been better to move away from the logic of exclusion and work to achieve partnership between all of the press parties, but this did not happen.”

On the other hand, people working in the media outlets affiliated with the Gaza government are concerned about the formation of the unity government, as they do not know whether those outlets will continue to work, broadcast events or change their crews working in the Gaza Strip.

Despite this ambiguity, the Interior Ministry of the Hamas government opened a new FM radio station on May 22 to broadcast on its behalf.

A senior government source, speaking to Al-Monitor on condition of anonymity, said, “There won’t be any serious change at the Interior Ministry in the Gaza Strip, and thus the affiliated media outlets will not be affected by any coming governmental change.”

For her part, Israa al-Mudallal, a spokeswoman for the Gaza government, told Al-Monitor: “The officials in Gaza have no clear vision about the nature of the change that might affect the existing media outlets, as these are affiliated with the government. They have no clear vision whether they will be integrated with other media outlets or remain independent, and whether they will have new staff or will preserve their current staff.”

There is no doubt that there will be change in the discourse of state and official media outlets once the unity government comes to power in the Gaza Strip, but this change will depend on the extent of harmony between the two reconciled political factions, Hamas and Fatah, and the ability of the Palestinian Journalists Syndicate to unite.