Fatah senses Hamas' regional decline, and is urging it to focus its efforts on national reconciliation. 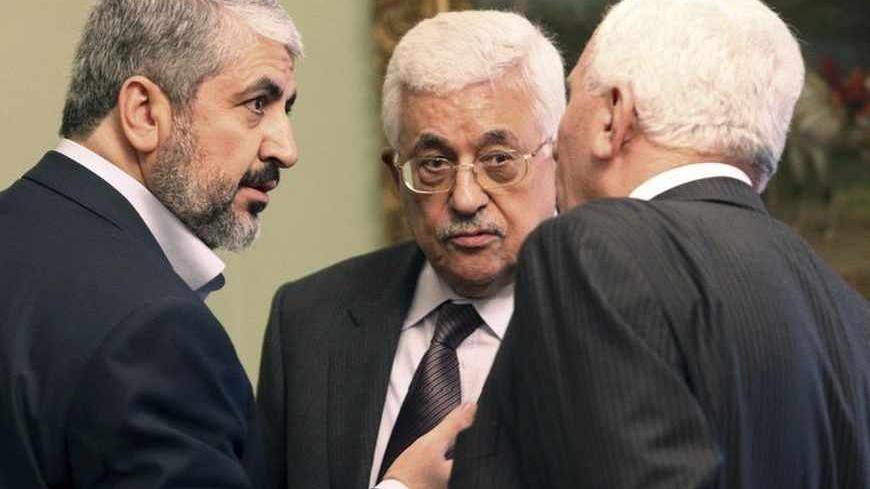 While all eyes in the Arab world are focused on Egypt, in Palestine, people have one eye on the events in Egypt and another on Hamas. Observers realize that the political future of Hamas and its current position cannot be separated from what is occurring in the Egyptian political arena.

Prior to the revolution, Egypt served as an incubator for reconciliation between Fatah and Hamas. Following the Jan. 25 Revolution it maintained this role, yet with one essential difference: Members of the Muslim Brotherhood were the decision-makers. Hamas, according to its charter, is one of the Brotherhood's wings in Palestine. Thus, the link between the deteriorating situation in Egypt and Hamas' political situation was inevitable, especially since Egypt serves as the only "lung" to the outside world for the Gaza Strip, which Hamas has controlled since 2007.

Osama Qawasmi, a spokesman for Fatah, said, "Hamas is going through very difficult times after it has abandoned its historic strategic allies, and following the Arab Spring, particularly in Egypt."

Speaking to Al-Monitor, Qawasmi said, "The safest way for the Hamas movement to persist is for it to give up being a part of the global Muslim Brotherhood, which has failed when it comes to managing political affairs in the countries that witnessed the Arab Spring." He continued, "For years, Hamas has neglected the national project according to purely partisan agendas and considerations. The movement has always bet on foreign regimes and an attempted coup against legitimacy."

The close ties Hamas had with Hezbollah, Syria and Iran was a source of concern for the Palestinian Authority (PA). The PA believed this support — whether through arms or money, and which guarantees its survival — increased the strength of Hamas.

Qawasmi stressed, “If Hamas wants to get involved in what is going on in Egypt now — either through incitement via Hamas-affiliated media outlets, sending its fighters to the Sinai, or trying to spark sedition in Egypt — this would be against the interests of the Palestinian cause and the Arab states.”

Many Egyptian anti-Muslim Brotherhood media outlets accuse Hamas of involvement in violent incidents that have led to the killing of Egyptian protesters opposed to the rule of ousted President Mohammed Morsi. Many Palestinian journalists believe that the Egyptian media incitement against Hamas has affected the Palestinian people in general.

This is perhaps why the Palestine Journalists Syndicate (PJS) in the West Bank, which is controlled by Fatah, issued a statement on July 8 saying, "Palestinian journalists, represented by their syndicate in Jerusalem, support the choice of the Egyptian people and the June 30 revolution as a corrective path for the Jan. 25 revolution." This position was seen by independent journalists as a provocation against Hamas and unwarranted interference in Egyptian affairs.

Amin Maqbool, the secretary-general of the Fatah Revolutionary Council and a member of the movement's reconciliation delegation, stressed, “Today Hamas has become weaker because they lost their allies in the region, and Egypt has accused the movement of participating in the bloody events there." He notes that these developments should serve as a lesson for Hamas to work to achieve reconciliation.

Maqbool went on to say that Hamas — which has opted for armed resistance against Israel, an approach that is not followed by the Muslim Brotherhood — will once again "realize the special nature of the Palestinian situation through reducing their reliance on the global Muslim Brotherhood, following a moderate policy aimed at reconciliation, and engaging more in the Palestinian political system."

Fatah has released successive statements accusing Hamas of meddling in the affairs of Arab countries, especially after the developments in Egypt. However, Hamas has maintained silence. It has only released two official statements, the first on July 1, accusing Fatah of political outbidding and false accusations. The second statement was issued on July 7, and in it Hamas condemned the massacre and expressed grief and condolences.

All leaders and deputies of Hamas in the West Bank have maintained silence and refused to comment on the events in Egypt. Informed Hamas sources told Al-Monitor, "There are internal [directives] to not discuss Egypt and Hamas in the media."

The only statement was made on July 5 by Hamas Prime Minister Ismail Haniyeh during the Friday prayer at a mosque he inaugurated at the Bureij refugee camp. Haniyeh said, "There is no fear for the resistance because Egypt is the true [geographic] depth of Palestine."

The weakness of Hamas due to its loss of regional allies and its support of the Muslim Brotherhood, especially in Egypt, reminds Palestinians how the late President Yasser Arafat supported in 1990 Iraqi President Saddam Hussein when the latter invaded Iraq. This affected the relationship between Palestinians and the Arab Gulf states, their main source of employment at the time. They are still paying a heavy cost on the popular and political level. This is exactly what Hamas supporters are saying, in whispers, to Fatah supporters in any discussion about Hamas' political alliances in the region.

Nazir Majali, a writer and political analyst, also warned Al-Monitor of Hamas’ steady regional decline as a result of the Brotherhood’s fall. "It is clear that Hamas' position in Egypt and the Arab world is in steady decline. The changes occurring in Egypt will reflect negatively on Hamas, especially given its public position of support for deposed President Morsi," he said.

Majali added that it was “very urgent that Hamas return to its original national agenda and ally itself with the rest of the Palestinian movements. Today, Hamas must realize that the road to Ramallah is shorter than the road to Cairo or Doha."

Majali warned that the current circumstances indicate that Israel may intend to prepare for a military strike against the movement. "Israel is now threatening to inflict a painful blow to Hamas. In Israel's view, the movement has grown weak and now is the appropriate time for a strike. Therefore, Israel is using its media to exaggerate Hamas' strength regarding the fact that it possesses and is producing weapons that threaten Israel's security. It is threatening to strike the movement in the Gaza Strip, even if the latter doesn't provoke Israel," he said.

Qawasmi denied that Fatah was using the current situation, or Hamas’ isolation, against the latter to make the movement support national unity and reconciliation based on a Fatah agenda.

Maqbool confirmed the above, saying, "We must acknowledge that there were radical changes in Hamas' position during the reconciliation dialogue. The movement agreed to a truce, and to establishing a Palestinian state based on 1967 borders. Furthermore, they have been pursuing those who launch rockets against Israel. All of this indicates that they changed their policies long ago.”

He continued, "Given the current facts on the ground — including the closure of the Rafah crossing and feelings within the movement that it will be isolated — this will help Hamas convince the movement's extremist currents to agree on ending division, to return to the Palestinian political system and to implement the agreements with Fatah."