Palestinian President Mahmoud Abbas is stuck between US Secretary of State John Kerry and the Palestinian street. 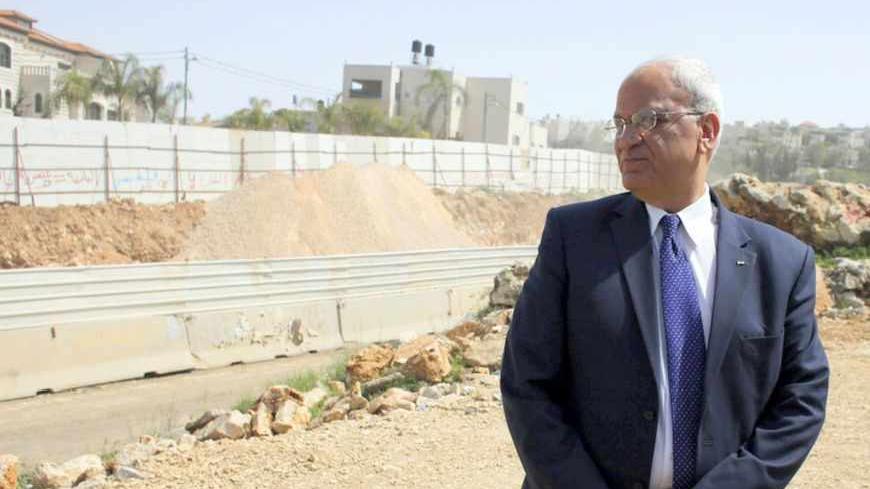 Saeb Erekat, a Palestinian senior politician and chief negotiator, stands near a six-lane highway under construction, which would divide the Arab neighborhood of Beit Safafa in Jerusalem, March 14, 2013. - REUTERS/Ammar Awad

Fewer than 24 hours stand between Ramallah and visiting US Secretary of State John Kerry. All indications are that the latter will come bearing new proposals for the resumption of negotiations between the Israeli and Palestinian sides, thus heralding the end of a festive week at the Muqata, the headquarters of Palestinian President Mahmoud Abbas. Kerry's visit there will be held from June 27-29.

The official Palestinian narrative, according to senior Palestinian negotiator Saeb Erekat, is that "the Palestinians' terms for resuming negotiations remain just as they were. Namely, Israel's recognition of a Palestinian state on the borders of the Palestinian territories occupied in 1967, a settlement freeze, and the release of Palestinian prisoners held in detention since before the Oslo Peace Accords of 1993."

Erekat told Al-Monitor,  "These are not ‘conditions,’ but commitments made by the Israeli side. We must not permit ourselves to get mixed up between preconditions and commitments, otherwise there will be no resumption of negotiations. For just such confusion is what Israel has been attempting to bring about the whole time."

Erekat stressed, “There will not be any meeting between Israeli Prime Minister Benjamin Netanyahu, President Abbas and Kerry during the latter's visit to the Palestinian territories and Israel at the end of this week." He further added that "no such meeting is on our agenda."

Yet Israeli media has been carrying reports that Abbas might meet with Netanyahu in a goodwill gesture to Kerry, to prove the existence of a Palestinian partner in the peace process. Nevertheless, these statements have been categorically denied by PLO Executive Committee member Hanan Ashrawi, who flatly stated to Al-Monitor, "These reports have been fabricated by Israeli intelligence with the goal of confusing the Palestinian street. No more."

She added, "The fundamental Palestinian requirements for a resumption of negotiations — such as the establishment of a Palestinian state on the '67 borders, a settlement freeze, and the release of prisoners detained since prior to 1993 — are not up for discussion."

But Palestinian analysts cast doubt on the aforementioned official Palestinian narrative. "Kerry has absolute certainty, and this is what the Palestinian leadership has yet to announce (as received)," Palestinian writer and political analyst Hani al-Masri told Al-Monitor.

"The next few days will witness (one of) two scenarios," al-Masri said. "Either matters will have ripened to a sufficiently dramatic degree to allow for a trilateral meeting between Abbas, Kerry and Netanyahu in the Jordanian capital, or Kerry will issue proposals that President Abbas will have to study with care and obtain Arab consensus for, so that he may travel in the next few weeks to Washington and meet with Netanyahu there."

Masri stressed, "tether three Palestinian conditions, which are being considered a stumbling block to negotiations, have already shrunken to the point where they may be more properly viewed as, at best, one and a half conditions."

He added, "President Abbas stated at the latest Central Committee meeting that it is either the establishment of a (Palestinian) state on the '67 borders or a settlement freeze. This angered some of the Central Committee members, who viewed his statements as an overt abandonment of the declared Palestinian conditions for a resumption of negotiations."

Masri offers evidence for his contention, stating. "Those who carefully study Erekat's statements over the last few days will understand as much when they note Erekat's remark that ‘We have not conceded on the condition (of demanding) a Palestinian state through negotiations; that is, it is the object of the negotiations, not a precondition for their resumption.’"

He asserts that all indications on the ground — whether in President Abbas's statements to the PLO's Executive Committee or through the political developments on the ground — lead one to conclude that the Palestinian leadership is presently engaged in secret negotiations far removed from both the international committee and the Palestinian street.

Speaking to Al-Monitor, he added, "Contrary to what is commonly rumored — that Kerry is coming with an American initiative concerning the peace process between the two sides — there is in fact no such initiative or anything resembling it. On the contrary, the Palestinians will be pressured (explicitly) and the Israelis implicitly into taking serious positions on a return to the negotiations table and engaging in the peace process."

Yet Masri goes so far as to say that Abbas "is now caught between a rock and a hard place. If he does not accede to the resumption of negotiations, he will be politically isolated like the late President Yasser Arafat. Further, he will forfeit American support, now estimated at about $500 million annually, upon which he is perpetually dependent in order to salvage the PA's budget. On the other hand, should he return to negotiations without preconditions, he will be in a difficult position before Palestinian public opinion. He understands that his popularity has slipped into chronic decline."

In Masri's view, for Abbas to escape the jaws of his predicament, "He is now in dire need of an accomplishment before the Palestinian people; something that will justify his resumption of negotiations, even if he does so in the shadow of diminished preconditions. This accomplishment can come in the form of a settlement freeze or the release of prisoners who have been detained by Israel since before the Oslo Agreements were signed."

Those who know the Palestinian street well understand that the issue of the prisoners is one of the central issues that attracts a deep resonance and wide sympathy among Palestinians. This is particularly the case among the pre-1993 prisoners, most of whom are ill or elderly.

Israel had already announced several times in the past that it would agree to release all prisoners detained before 1993, who number 107. According to sources at the Ministry of Detainees and Ex-Detainees’ Affairs, 50 prisoners have been enumerated who were to be released in three installments.

The other major obstacle comes in the form of the settlement freeze. It is not clear that a freeze would encompass the major settlement blocs or the outposts that sprout up overnight like mushrooms on the hilltops of areas classified as 'Area C' according to the Oslo Accords.

The area of land classified as 'Area C' consists of nearly 63% of the Palestinian territories occupied in 1967. Meanwhile, the number of settlers living throughout the West Bank and Jerusalem reaches 631,000, divided up into 184 settlements and 167 outposts, Atif Daghlas, the coordinator of the Popular Resistance's Follow-Up Committee, told Al-Monitor.

On the matter of the settlements, Erekat does not conceal his anger at Netanyahu over the inauguration of a school in a settlement erected on the territory of the Salfit district in the northern West Bank. He told Al-Monitor’s correspondent in an angry tone, "We want for Kerry's mission to succeed, but it is clear that the Israeli government is setting obstacles in front of him before he even arrives, further showing that the Israelis are proceeding with settlement activity in full force."

He concluded by saying that "Netanyahu has personally undermined Kerry's efforts to get back to negotiations, when he personally inaugurated a school a few days ago in a settlement built on territories occupied in 1967."