Palestinians see no reason to negotiate as Israeli settlements continue

As international efforts intensify to resume the negotiations between Israel and the Palestinian Authority, Palestinians feel that discussions will go nowhere as long as the Israeli government sticks to its policy of settlement expansion. 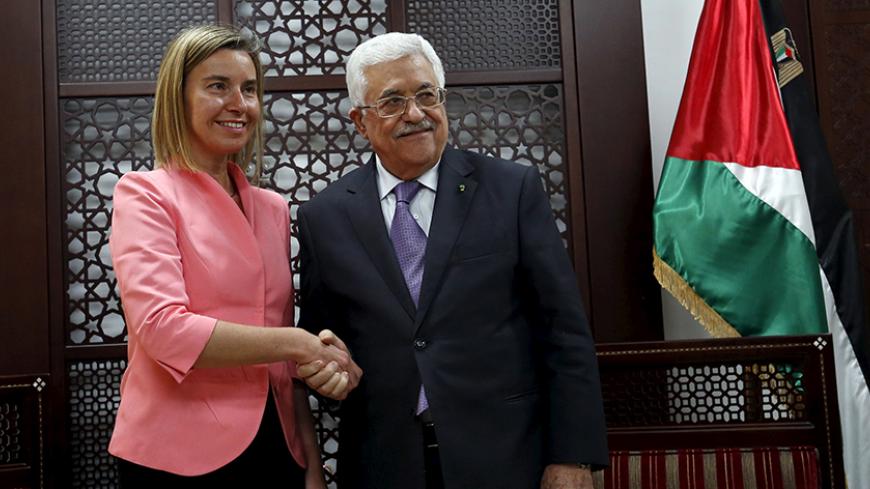 There are growing Arab and international calls to revive the Israeli-Palestinian negotiations that stopped after Israel refused to release the fourth batch of prisoners incarcerated before the Oslo Accord on March 29, 2014.

The resumption of negotiations was discussed in Geneva during the June 6 meeting of the Quartet on the Middle East, which includes Russia, the European Union, the United States and the United Nations. The meeting was preceded by a May 20 meeting between EU High Representative for Foreign Affairs and Security Policy Federica Mogherini and Palestinian President Mahmoud Abbas in Ramallah.

Mogherini said during the meeting that the European Union is committed to finding ways to relaunch the peace process, and that she will hold meetings with officials in the region to that end.

Palestinian chief negotiator Saeb Erekat told Al-Monitor that despite these international efforts, and although the Palestinian Authority (PA) has shown its commitment to the peace process, the PA is nevertheless demanding that Israel fulfill its obligations as stipulated in the Oslo Accord and the subsequent agreements reached through US Secretary of State John Kerry’s initiative to resume the negotiations.

A frustrated US President Barack Obama said in a May 15 interview with Al-Arabiya, “The only solution to me over the long term is a two-state solution,” adding, "What I think at this point, realistically, we can do is to try to rebuild trust."

Abbas stressed during his meeting with Mogherini, “We are with the peace process, but the Israeli side must shoulder its responsibilities, halt the settlement activity, release the fourth batch of prisoners incarcerated before the Oslo Accord and accept the principle of the two-state solution on the 1967 borders.”

For his part, Erekat said, “The Israeli government is impeding the peace process through its measures on the ground, which eliminate any possibility of a two-state solution.” He explained, “The new [Israeli] government has opened construction bids in the Leshem settlement to link the settlement of Ariel with the Jordan Valley, which involves the division of the West Bank and the undermining of the two-state solution. Is this a government that wants peace?”

Erekat added, “Israel stopped the negotiations and is destroying the two-state solution. Stopping the settlement activity for the resumption of negotiations is not a requirement on our part, but a commitment that Israel has to respect, but this is not possible when the [Benjamin] Netanyahu government program is based on settlement construction.

“The negotiations cannot be resumed before the Israeli government announces the halt of its settlement construction, accepts the principle of the two-state solution in the 1967 territories and releases the fourth batch of prisoners detained before the Oslo Accord.”

Qais Abdul Karim, a member of the Palestinian Liberation Organization Executive Committee and deputy secretary-general of the Democratic Front for the Liberation of Palestine, told Al-Monitor that there is no room for a return to negotiations under any formula, as long as the Netanyahu government disavows its commitments to the peace process and sets impossible conditions such as the recognition of Israel as a Jewish state.

Abdul Karim said, “The negotiations can be resumed when the Palestinian conditions are met, when there are serious international efforts and when there is an international peace conference capable of compelling Israel to apply the international legitimacy resolutions.”

Omar Shehadeh, a member of the PLO’s Central Council and leader in the Popular Front for the Liberation of Palestine, told Al-Monitor, “Objectively speaking, there is no point in resuming the negotiations in light of the ongoing settlement activity and Israel’s undermining of the two-state solution project. Therefore, I rule out the resumption of negotiations in the near future.”

In light of this stalemate, Israel is trying to push a number of Arab countries to pressure the PA to resume negotiations, taking advantage of a June 5 public meeting in Washington between retired Saudi Maj. Gen. Anwar Ashki and Dore Gold, the new general director of the Israeli Foreign Ministry, during which Ashki alluded to possible cooperation and joint action between Saudi Arabia and Israel. Some see a convergence between Israel and Saudi Arabia, especially with the imminent conclusion of the nuclear deal with Iran.

Netanyahu said in a speech at the Herzliya Conference on June 9, “I hope that the Arab countries will put pressure on the Palestinians to return to the talks in order to reach the two-state solution. There might be a chance because some Arab countries secretly agree with my position.”

Erekat said, “At the moment, no new initiatives have been submitted to us for the resumption of negotiations.”

Shehadeh said, “Arab pressure on the PA is possible, but Israel rejects the Arab peace initiative, so there is no point in resuming the negotiations based on it. However, Israel is seeking to start cooperating with Arab countries to counter the so-called Iranian threat, and this may eventually lead to peace between Israel and Arab countries, as stipulated in the Arab Peace Initiative.”

Abdul Karim said that the Arab Higher Committee's discussions with France about French Foreign Minister Laurent Fabius’ draft initiative — which Fabius had intended to submit to the UN Security Council — were mere exploratory rounds and not successful.

The initiative included several elements to support a resolution of the Israeli-Palestinian conflict, including the formation of a Palestinian state based on the 1967 borders, with a land swap and Jerusalem as the capital of both states, the recognition of Israel as a Jewish state, the establishment of a timeline for the negotiations, as well as the formation of an international peace committee.

Political writer and analyst Khalil Shaheen told Al-Monitor, “Western and Israeli official parties are seeking to start negotiations through a third party, suggesting that a [parallel] political process is filling the vacuum created by the collapse of the negotiating process. This political process could prevent any further tension or explosion.”

Shaheen added, “During the upcoming period, Palestinians will be completely paralyzed amidst the international efforts — as lately witnessed with the FIFA developments on May 29, when the Palestinian Football Federation retracted its demand to revoke Israel’s FIFA membership. They will wait for changes at the regional level or in the US position, which seeks to contain, not terminate, the conflict.”

Asked about the Israeli-Saudi rapprochement and the possibility of activating the Arab Peace Initiative, Shaheen said, “The regional developments serve Israel and Netanyahu, who said that he is looking for solutions and regional security cooperation with the Arab states vis-a-vis Iran. [Netanyahu’s statements] derailed Arab attention from the real danger that Israel constitutes. This also marginalizes the Palestinian cause and distances it from Arab interests. Therefore, a clear Palestinian position on the Arab initiative is in order, not because Israel rejected it, but because some Arab countries have completely disregarded it.”

Based on experience that stretches back 21 years, the Palestinians are leery that entering new negotiations with Israel could be a waste of time as the settlements continue to ravage their land. According to them, such a step could eliminate the possibility of establishing a Palestinian state in the absence of any real and serious international pressure on Israel.