The Vatican's recognition of Palestine and the large support for a committee on Israel's approach to Palestinian soccer, should serve as warning signs before Israel becomes isolated in the international arena. 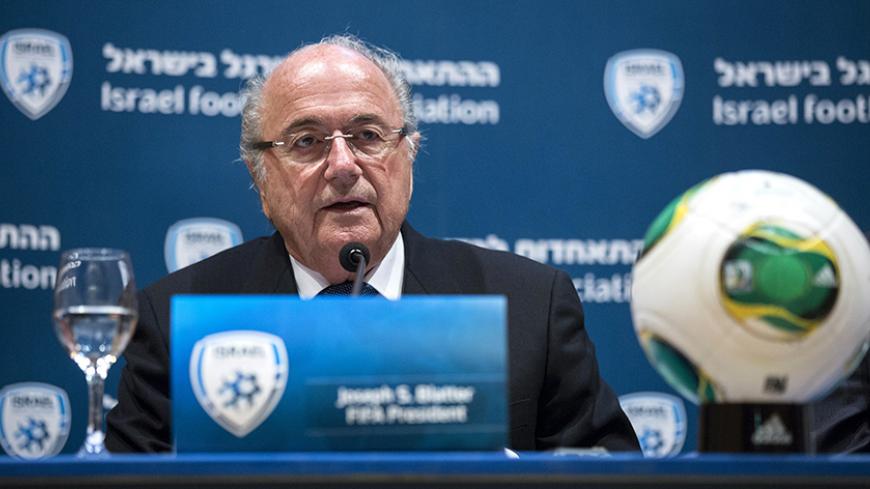 The May 20 meeting between Israeli Prime Minister Benjamin Netanyahu and EU High Commissioner for Foreign and Security Affairs Federica Mogherini raised heart rates among advocates of the two-state solution.

The almost total silence in reaction to reports that Netanyahu had suggested to his guest from Brussels that Israelis and Palestinians negotiate the boundaries of the settlement blocs should diminish their optimism and make them face the reality of Netanyahu’s coalition. If the settlers and their representatives in the Knesset and government had thought for a minute that the Palestinians might respond favorably to the new proposal, they would not have sat idle. But Education Minister Naftali Bennett and Defense Minister Moshe Ya’alon apparently understand that the Palestinians will not agree to delineating the borders of the settlements instead of drawing the map of Palestine, with the inclusion of East Jerusalem. It doesn’t take a law professor to understand that Palestinian resignation to the existence of the settlements would indirectly admit their legitimacy and deprive them of their central arguments against Israel at the International Criminal Court. The bait thrown their way through Mogherini was too transparent and too late.

This was not the first time that Netanyahu has thrown a bone to the international community and the media, tempting them to imagine meat on it. It will also not be the last. Even as Mogherini was coming out of the meeting, the diplomatic correspondents rushed to report to the nation that Netanyahu supports a regional peace initiative. No, he’s not referring to the Arab Peace Initiative awaiting Israel since 2002, with its proposal of an Israeli withdrawal from the territories in return for normalization of relations with the Arab states. The prime minister noted that the Arab Spring and the rise of the Islamic State have completely changed the regional picture — as though he had supported the initiative in the past, and as if to this very day he weren't working to undermine the Oslo Accord.

As far as we know, Netanyahu’s soothing words generated no excitement at the EU headquarters in Brussels, nor in Washington or the settlements of Ariel and Itamar. In both capitals they were considered background noise. Currently, the main event is the accelerated Iran negotiations, which are supposed to end on June 30. No one in Jerusalem is hopeful that Russia, China, France or Britain will stand in President Barack Obama’s way to sign the nuclear agreement. But the agreement, which Netanyahu's associates have obliquely compared to the 1938 Munich one, will renew Germany’s historical debt to Israel. The first payment on that account is due in September, when France submits its proposal to the UN Security Council to recognize Palestine.

Chancellor Angela Merkel makes no bones about her opinion of Israel’s settlement policy in general and Netanyahu’s credibility in particular. Nonetheless, according to Israeli officials who spoke to Al-Monitor on condition of anonymity, in talks conducted at the end of May in Jerusalem, members of a Social Democratic Party (SPD) parliamentary delegation promised that Merkel would only recognize Palestine following negotiations for a peace arrangement between the sides. Some members of this delegation (headed by SPD Bundestag spokesperson Niells Annen), which visited Israel to mark 50 years of diplomatic ties between the two states, made it clear that given Germany's “special relationship with Israel,” this position enjoys the sweeping support of the coalition parties and could change only if the United States uses its veto in a Security Council vote on the French proposal.

The obstacles placed in the path to international organizations by the United States, which is divided between the Democratic administration and the Republican Congress, and by Europe, which is divided between guilt and political interests, force the Palestinians to look further afield to secondary forums, ones not controlled by these diplomatic tycoons. They succeeded in gaining the Vatican's recognition of Palestine. Although the pope has not directed armies for ages and does not even have a representative on the Security Council, hundreds of millions around the world treasure his words. The Palestinians failed in their May 29 attempt to bring about Israel’s suspension from FIFA, soccer's governing body, but this is only the start of that organization’s “South Africanization.” Even FIFA member North Korea has never been suspended from the organization.

After the Palestinians withdrew their proposal to suspend Israel from the international soccer association at the very last minute, the gleeful reactions of Israeli politicians and officials seemed disproportionate, even unhinged from reality. Netanyahu said, “The Palestinian provocation has failed.” Culture and Sports Minister Miri Regev described it as “our tremendous achievement.” Transportation Minister Yisrael Katz was quick to post a provocative Facebook status about the Palestinian Football Association president: “Jibril Rajoub failed in his plot to kick Israel out of FIFA. Now is the time to jail him in the Muqata [the Palestinian government compound in Ramallah] and let him play ball with his comrades!” The chairman of the Israeli Football Federation said the heads of other delegations had praised him for handing Rajoub a “knockout.”

Anyone watching the live broadcasts by the Israeli media understood that Israeli diplomacy had not scored a goal in Switzerland. In fact, it was the symbolic and resonant opening of a new phase. One session by the management of the world’s most popular sport achieved what dozens of academic debates on boycotting Israel could not accomplish. For now, Israel has not been suspended and its dream of making it to the 2016 Euro championships is still alive, but the 165 votes in favor of establishing a committee to ensure that Israel fulfills the Palestinian demands (with only 18 voting against) made it abundantly clear that the future is here.

The FIFA congress, after all, is not the only forum where the Americans don’t enjoy automatic veto power and where issues dear to the hearts of Israelis are decided.

Rajoub himself (whose house was bombed in 2001 by the IDF) wears additional hats in the Palestinian Authority. In addition to heading the Palestinian soccer association, he also serves as chairman of the Palestinian Olympic Committee. That arena, known in the past as a venue of wrangling and boycotts, could soon make Israeli diplomats sweat just as much as the athletes. The professionals at the Israeli Foreign Ministry already understand this. It’s too bad that policy is led by other people, those who value party primary votes more than they do international messages. These politicians are responsible for the looming moment when such moves isolate Israel, not just in declarations, but in deeds.