FIFA’s general assembly will convene on May 29 and may vote on removing Israel from the world soccer association, in a step Palestinians see as a major progress in the nonviolent efforts to call out Israel for its ongoing violations against Palestinian sports. 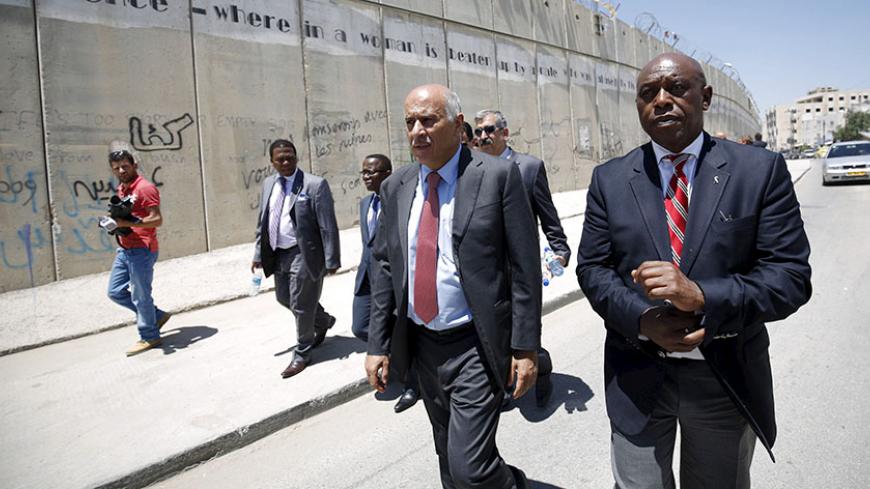 Head of the Palestinian Football Association Jibril Rajoub (2nd R) walks with anti-apartheid activist Tokyo Sexwale (R) past Israel's controversial separation barrier as they arrive for a news conference in the West Bank town of al-Ram, near Jerusalem, May 7, 2015. - REUTERS/Mohamad Torokman

The head of the Palestinian Football Federation spoke optimistically of winning the vote that the general assembly of the world soccer association FIFA will hold May 29. Three-fourths of the association's 209 members are needed to remove a member. “I am 100% sure we will win the vote and remove the Israelis from FIFA,” Jibril Rajoub told Al-Monitor on May 21 after meeting with FIFA head Joseph “Sepp” Blatter.

Rajoub appeared to have little faith in the mediation efforts of Blatter, who had met May 19 with Israeli Prime Minister Benjamin Netanyahu. Palestinians have been through this before and have in past years agreed to withdraw their efforts to kick the Israelis out only to find that travel restrictions have continued, Rajoub argued. Palestinian players, especially from the Gaza Strip, are often denied travel to the West Bank or abroad to participate in training or in games. Players from visiting teams are also sometimes denied entry, causing embarrassment to the Palestinian Football Association.

“He tried to present some new assurances about the movement of our players, but it was too little, too late,” Rajoub said.

Blatter told Palestinians that he has received new concessions from the Israelis regarding the travel issues of Palestinian players. A committee has been created, including a Palestinian, an Israeli and a FIFA representative, who meet on a monthly basis to review the situation.

“Our issue with the Israelis is not only about the movement of our players. We can’t accept that the Israeli Football Association includes five clubs from settlements and the racism in Israeli stadiums,” Rajoub said. Israeli soccer teams and their fans act and tolerate a high level of racism against Arabs in the stadiums. FIFA has a strong policy against racism and conducts campaigns to root it out of the game.

FIFA statutes include the protection of its associations from others playing in its country. Settlements are considered illegal according to international law and therefore, Israeli soccer teams would need the approval of the Palestinians to play in the settlements built in the occupied Palestinian territories.

Rajoub’s argument is an attempt to counter the Israeli Football Association’s repeated claims that it is not responsible for the decisions of the Israeli security authorities by presenting their own violations of FIFA laws and regulations.

Blatter’s visit, which he called a mission of peace, comes a week before the general assembly meeting, reflecting the seriousness of the issue facing the four-time president of the world’s leading soccer organization. The visit to Israel and Palestine appears to be connected to FIFA’s presidential elections. James Dorsey, who follows Middle East sports, gives more importance to the Palestinian-Israeli issue than Blatter's re-election.

“Winning a fifth term in office will be a cakewalk for FIFA’s oft-criticized president Blatter when measured against the challenges posed to him by the looming Israeli-Palestinian showdown in world soccer’s governing body,” he said. Among the challengers to Blatter in the presidency is Jordan’s Prince Ali bin Hussein, who has received the last-minute endorsement of Michael van Praag, the Dutch Football Association president who withdrew his candidacy in favor of the Jordanian prince.

The Swiss soccer president suggested the holding of an Israeli-Palestinian soccer game in Zurich as a way to ease the tensions between both sides. Rajoub insists that he didn’t reject the idea but argued that it requires first a change in the environment through the full recognition of the Palestinian Football Association and granting it all its rights. “I told Blatter that for the time being, the idea is premature,” Rajoub said.

Israeli soccer officials deny being easy on racism during games, saying that they have deducted points from a team because of racist talk by its fans. If the Israeli association is suspended, this would mean that as part of the Union of European Football Associations, it would not be able to compete in the Euro 2016 qualifiers and its clubs would be barred from the European competition.

The Palestinian Football Association joined FIFA in 1998, joining Scotland, Northern Ireland, Hong Kong and others as members that are not internationally recognized sovereign states.

The Palestinian national team competes in the Asian Football Confederation and qualified for the Asia Cup for the first time this year.

Efforts to kick out the Israeli soccer association have clearly shaken the Israelis, who have acted with impunity and arrogance for years. Palestinians take the success of the South African black community as a role model for their actions in making Israel pay a political price for its continued occupation and colonial settlement policy. Whether the Palestinian resolution will garner the needed 75% of the general assembly votes is unclear, but for Palestinians who have little to lose, the mere vote on the resolution will be a huge step in the nonviolent efforts to bring an end to Israel’s 48-year-old occupation.