Palestine to raise concerns about settlement-based teams at FIFA conference

The Palestinian Football Federation is planning to raise the issue of five Israeli soccer teams located in the occupied territories on the grounds that these teams are violating FIFA statutes. 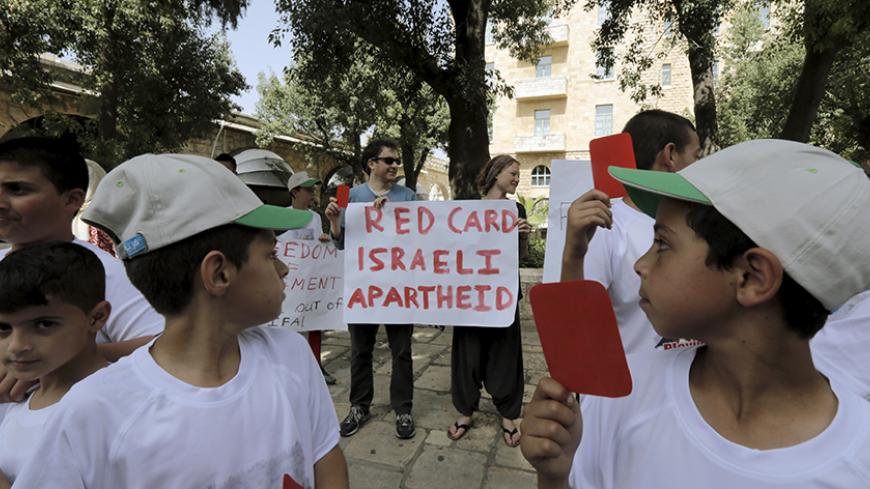 Palestinian children hold red cards during a protest held upon the arrival of FIFA President Sepp Blatter to his hotel in Jerusalem, May 19, 2015. - REUTERS/Ammar Awad

The president of the Palestinian Football Federation (PFF), Jibril Rajoub, plans to raise at the FIFA congress in Mexico the status of five soccer clubs based in Jewish settlements in the occupied territories. The five teams located in the West Bank are Beitar Givat Ze’ev, Beitar Ironi Ariel, Ironi Yehuda, Beitar Ironi Ma’aleh Adumim and Hapoel Bik’at Hayarden. All five teams play in the Israeli Football Association, a clear violation of the statutes of the world football governing body FIFA.

Palestinians want to remind the world that the Crimean sports clubs were banned in 2014 from playing in the Russian League by FIFA’s Europe’s regional association UEFA after the Russian annexation of the Ukrainian peninsula.

The case of the five settlement clubs was raised during the contentious May 2015 FIFA congress in Zurich when the PFF requested the ouster of the Israeli association for multiple FIFA violations, including the settlement teams. At the time, a compromise was brokered that allowed the Palestinians to withdraw their request, and in return a FIFA committee headed by South African businessman Tokyo Sexwale was asked to study all the Palestinian complaints.

Sexwale visited Ramallah on May 5 and was photographed next to the Nelson Mandela statue that was inaugurated there April 26. Sexwale, who spent years in jail with Mandela, told the local press that he will submit a full report about the progress in dealing with the complaints by the PFF to the FIFA congress due to meet in Mexico on May 12-13. This was the third visit by Sexwale to Palestine since FIFA set up the monitoring committee he heads.

Rajoub told Al-Monitor that the Palestinian delegation to the FIFA congress in Mexico will continue to press the issues of racism in Israeli stadiums and the illegal clubs operating in the occupied Palestinian territories. “We will use all efforts possible to put an end to Israel’s violation of FIFA statutes.”

In addition to travel restrictions, racism in Israeli stadiums and the five settlement clubs, Rajoub said that the Palestinians will be raising the issue of Teddy Stadium.

“Teddy Stadium in Jerusalem is built on lands occupied by Israel in 1967,” he explained. Rajoub met April 30 in Zurich with the new president of FIFA, Gianni Infantino, and they discussed Israeli restrictions, settlement clubs and anti-Arab racism in Israeli soccer stadiums.

The issues that the committee headed by Sexwale has been asked by FIFA to investigate include travel freedom for Palestinian players and administrators as well as access to physically come to the West Bank for teams scheduled to play games in Palestine, racism in Israeli stadiums and the issue of the five West Bank settlement-based soccer clubs that play in the Israeli Football Association.

After 15 years of restrictions, a Palestinian soccer team from Hebron was allowed on Aug. 4, 2015, to travel to Gaza to play in front of Palestinian crowds in the besieged Gaza Strip.

Palestine also hosted its first World Cup qualifier against the national team of the United Arab Emirates in the city of al-Ram in the West Bank outside Jerusalem on Sept. 8, 2015. The game ended in a scoreless tie; the Palestinian team later lost its bid to qualify after losing 2-0 to the UAE in Dubai on March 24.

Palestinian officials told Al-Monitor that most of the travel restriction problems have been solved. “We are submitting the names of those who need to travel 35 days beforehand to the Israelis, and they usually approve 90-95% of the names on the lists,” a source in the PFF said on condition of anonymity. “However, the 5% denied are sometimes a key player or a goalie, which causes real hardship to the unity of the national team.”

The PFF was founded in 1928 and officially became part of FIFA in 1998 following the 1994 establishment of the Palestinian Authority. The PFF is now part of the Asian Football Confederation.

Al-Monitor has learned from Palestinian sports sources that the Israeli Football Association is planning to request a one-year postponement on the Palestinian request to prevent settlement clubs in the West Bank from joining the Israeli association.

Hard-line Palestinians and soccer supporters accused the PFF of giving up too easily on the demand that the Israeli association be ousted from FIFA at the May 2015 congress. It seems clear that in Mexico, the Palestinian position will be a hardened one, particularly when it comes to the legal status of the five Israeli settlement sports clubs located in the occupied Palestinian territories.