FIFA’s failure to make a decision about its own members' not honoring its statutes reflects the tremendous political pressure that is constantly exerted by Israel on various world bodies. 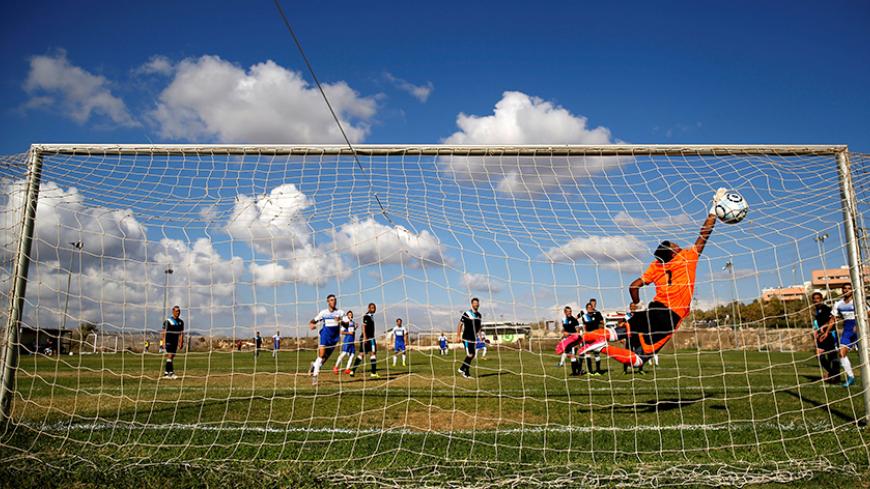 When Jibril Rajoub, the head of the Palestinian Football Association, took the stand May 11 at the 67th Congress of the international soccer governing body FIFA, leaders were embarrassed. FIFA President Gianni Infantino’s body language spoke volumes. “This is the fifth time that I address this Congress, and you are saying it is premature to take a decision,” Rajoub said in response to FIFA's postponing a decision on Palestinian demands that six Israeli settlement clubs stop playing in the occupied West Bank. The five-hour general assembly meeting of the soccer federation was broadcast live and has been archived on YouTube.

Rajoub continued his onslaught. “You have punished countries like Nigeria and Kuwait because governments interfered in the operation of the local federations.”

The head of the Palestinian federation rejected the intimidation tactics of Israeli Prime Minister Benjamin Netanyahu, who on May 8 demanded that Infantino remove the Palestinian proposal to ban settlement clubs from the agenda. “Here we have a situation in which the Israeli prime minister is interfering in the decision of this body.”

Infantino, unable on late notice to remove the Palestinian resolution that had been submitted two months earlier, made an end run. Having secured on May 9 a unanimous vote in the executive council to delay the issue for a year, Infantino submitted to the delegates a proposal to make a decision within one year. Palestinian protests that FIFA statutes forbid such last-minute entries did not dissuade the FIFA president, who railroaded his decision through and asked for an immediate vote.

To explain the council decision, Infantino said that they have not yet received the final written report of the FIFA Monitoring Committee on Israel and Palestine, which is headed by Tokyo Sexwale, a former South African government minister. The committee was appointed during the 65th FIFA Congress to avoid a vote on the same issue. The Palestinians withdrew their motion with the hope that Sexwale, a former anti-apartheid leader, would stand up for justice and fairness.

In a May 8 article published on LinkedIn, soccer expert James Dorsey said the FIFA Monitoring Committee’s draft report concludes with what he called imperfect recommendations: “Allow the status quo to continue, give Israel six months to rectify the situation, or continue talks between the Israeli and Palestinian soccer federations.” In his short speech to the 67th Congress, Rajoub seized on the second of Sexwale’s recommendations and told the 199 delegates assembled in Manama that Palestine is willing to give the Israelis a short period of time to end their incursion. “We recommend giving the Israel Football Association until the end of the current season or a maximum of six months to end playing games on Palestinian lands or face the consequences.”

Despite Rajoub’s passionate pleas and attempts to block the vote on the last-minute motion, the council request to postpone any decision until March 2018 passed with 73% support, which is far less than all other decisions, such as the FIFA budget and the lifting of the ban of Iraqi friendly games, which were approved by votes with more than 90% support.

Susan Shalabi, the vice president of the Palestinian Football Association, told Al-Monitor that the Palestinian delegation was happy to see 50 delegates go against the FIFA leadership. “This means a lot to us and encourages us to keep fighting.” Noteworthy is that voting is confidential, so it is impossible to know who voted which way.

Shalabi insisted that what the FIFA president did at the congress was a violation of its own statues. “The last-minute resolution is totally against what is allowed by the FIFA statutes, which require all delegates enough time to study a resolution before having to vote on it,” Shalabi said, adding that the Palestinian Football Association will be challenging the decision in the Court of Arbitration for Sport.

A press release issued by the Palestinian Football Association shortly after the conclusion of the 67th Congress and obtained by Al-Monitor criticized what it called a legally “ambiguous” decision. “We fear Mr. Infantino's action of today has set a precedent where governments decide the agenda for a FIFA Congress, and violations of the statutes and misuse of its legal devices.”

After the Congress, Infantino spoke again on the issue at a May 11 post-Congress press conference in Manama. He explained that the executive council hasn’t received a written report yet. “I am not happy we didn’t take a decision. We are not the only ones not making a decision.” Infantino said he is optimistic about recent media reports about movements in the peace process. “Hopefully, President [Donald] Trump can find a solution. If he has a good idea, I can take it on board as well for FIFA.”

The failure of an international sports entity to make a decision about its own members' not honoring FIFA statutes once again reflects the tremendous political pressure that is constantly exerted by Israel on various world bodies to accept the Israeli narrative. The fact that Israeli settlements are illegal, which has been stated as such by the UN, the Security Council and the International Criminal Court, doesn’t seem to have much effect. The Israelis are able to use their close relations with Washington to intimidate politicians and organizations to avoid making decisions. The question remains how long FIFA will allow such political intimidation in the sport, which it has repeatedly said should be left to the players and fans to enjoy without political interference.